I have a big Shapefile with 200,000 polygons but the file is too big for the application that will use it. I would like to generalise these polygons and create much smaller file.

I have tried to do this in QGIS using "Simplify Geometries" tool. I have tried this on a very small portion of my Shapefile and I am happy with the results but have small problem which I do not know how to solve. I have appended the image to show the problem.

How do I simplify this Shapefile and keep common boundaries between polygons as a single line and eliminate areas that have been created after simplification?

I get the following results. It is slightly better than before but still I get areas outside original polygons (see white areas in the picture below).

@Andrew suggested that I associate each line with adjacent polygon but I do not know how to do it in QGIS.

I am still trying to complete simplifying polygons process. I have followed instructions suggested in this post and when I thought I got acceptable results one more problem appeared. Below is the summary of what I did with images of results. All steps have been performed using PROCESSING toolbox in QGIS.

Could someone explain what went wrong here?

Why red simplified lines were not converted properly to simplified polygons?

As you can see I am not an GIS expert but need to do this myself. I do not know if I am too far from the solution but it is frustrating that I can see simplified lines that I found acceptable for what I'd like to do but cannot convert them to polygons.

Here are two images with results of last two steps of the process: 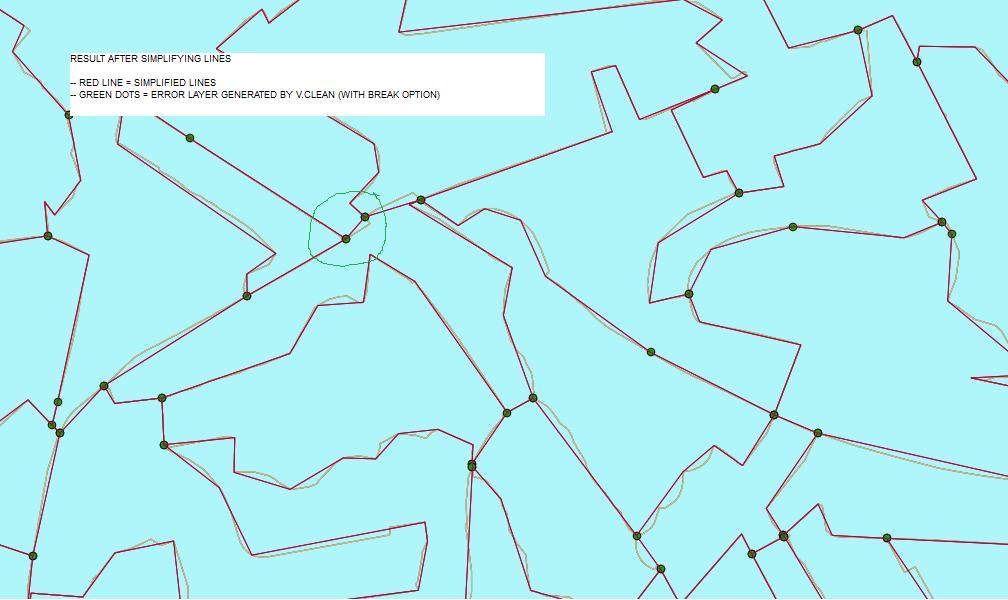 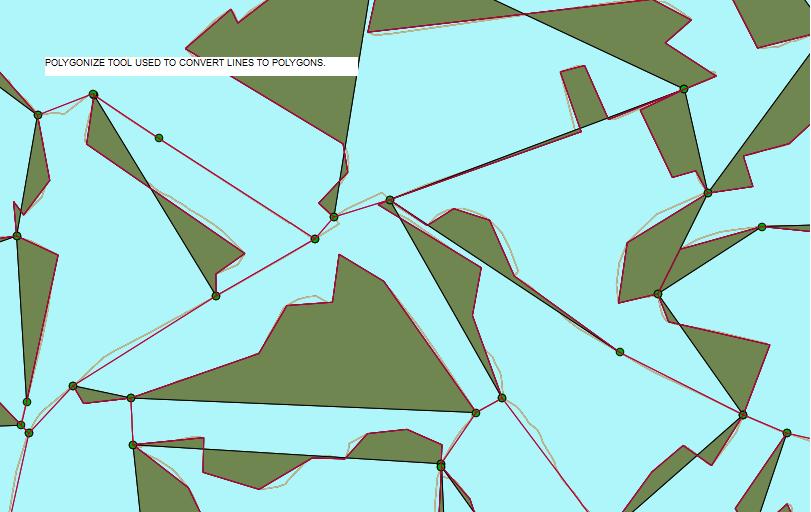 I got a pretty good result using GRASS v.generalize from the Processing Toolbox using default values:

I got into that problem with Qgis2.16, but couldn't get GRASS to give a topologically correct result like @AndreJ.

A nice workaround is to change the v.in.ogr snap tolerance in the advanced parameters of the v.generalize.simplify tool. The default is -1, which prevents snapping in GRASS.

By putting a small value here (like 1e-05 m), snapping is enabled and GRASS recognises the shared borders of the polygons. The simplification then gives a topologically correct layer, without holes.

Note : By setting the snap tolerance to higher values, it is even possible to alter the polygons so that very thin ones can be deleted if you want. Follow that operation with v.clean using rmarea and a threshold big enough to delete the small leftovers, and there you're done!

You can solve the problem with a Processing (ex SEXTANTE) model like this: 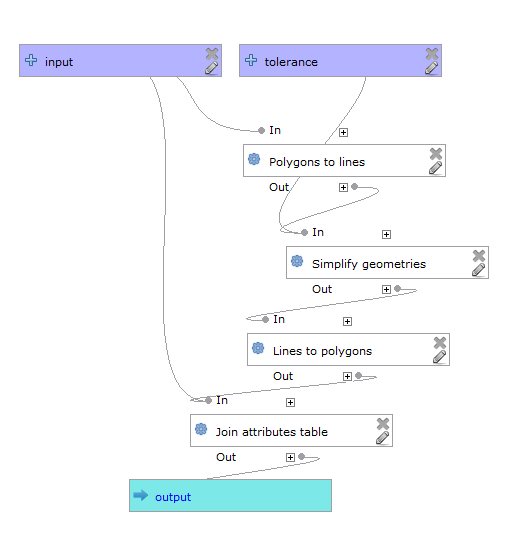 first convert your polygon into lines

use v.clean to clean your topology (with the "break" option)

then you simplify your lines

EDIT: To get the attributes of your polygons, the best way, if you don't have multipart polygons in the original dataset, is to get the centroids of the old andof the simplified polygons and join them based on the closest location (centroids should not move a lot if you only slightly modify your boundaries)

1
Simplify geometry of multiple features without losing shape
38
Generalizing polygon file while maintaining topology in QGIS?
16
Transforming polygon to linestring in QGIS
3
How to use GRASS Generalize to reduce GADM data size to 1/5 preserving topology?
2
v.generalize not working QGIS 2.14 "The following layers were not correctly generated" polygons
0
Mapshaper simplify equivalent in GRASS

3
Simplify Multigeometry polygons in QGIS
4
Simplify/generalize Polygons and keep topology of different layers PostGIS/QGIS
8
Using a formula to set the offset of a line pattern on QGIS 2.18
3
Split polygons into equal squares using custom QGIS tool
1
Extract the "mid/center-point" of the touching borders/lines of adjacent polygons