How to calculate position in a picture based on latitude/longitude

I have got a picture on which a user manually marks some points. Let's say for simplicity's sake these points always create a 4 point convex polygon. For each one of these points I know latitude and longitude.

Now the user enters latitude/ longitude for the 5th point and I have to show it on the same picture. What is the best way to calculate its screen position? 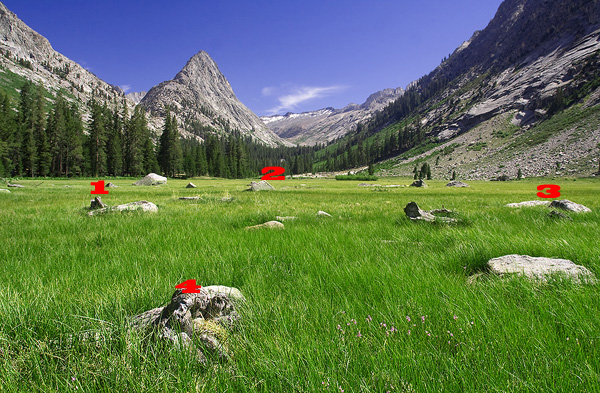 I have tried the following algorithm:

I have a test image, where I know exact geocoordinates for each point on the 10px grid, and I can say that this algorithm doesn't work.

What would be the better way?

I don't think this will be possible in general, because of vertical displacement of the objects in the scene. Consider the rock (at number four). The highest point of the rock is at a certain latitude / longitude. The pixel just below that is probably at the same latitude / longitude, or is very close (within a few centimetres). The pixel just above the highest point of the rock (some blade of grass perhaps) will be quite different though - perhaps some metres away.

If the ground was completely flat, your algorithm should work. Otherwise, a single photograph that combined vertical extent of the objects with perspective doesn't allow you to georeference.

I finally found not perfect but good enough solution.

Not the answer you're looking for? Browse other questions tagged latitude-longitude position or ask your own question.

1
Lat Long line intersecting with circle
1
Specifying a rectangle as two latitude/longitude pairs, one for center and one for size
1
How can I get the circle of a sphere (on Earth ellipsoid) around a point using the Latitude and Longitude?
1
Comparing points (latitude/longitude) w/address data (zip) to zipcode boundaries shapefile using QGIS?
0
How to make sure the result of lat/lng distance calculation is correct
0
Calculating number of degrees of longitude and latitude between points at same latitude on map?
4
Defining Latitude and Longitude before defining Datum?
1
Calculating haversine versus checking latitude and longitude digits after decimal point?
3
Creating 1 hectare Polygons given latitude longitude in Python