Why are some points in my PostGIS layer not displayed?

I have PostGIS table with some points and various attributes. Yesterday I added some more points to the table and now weird things are happening when I try and display layers built from these points.

If I construct a set of layers with a queries that select one 'classification' only the new data is displayed (these all have the same new classification) the other layer points do not appear on the map although they are in the attribute table.

If I load all the data into one layer then the new points don't appear (again they are in the attribute table).

The new data had a different origin -- I imported it from a csv file, all the other data came of GPS.

I have discovered that 'the_geom' for the two groups looks different:

The difference is now obvious but what I would like to know is why this causes problems and how it came about so I can avoid this issue in future.

Is one is an integer representation and the other float?

The new dataset is integer while the old is float.

For QGIS, it is no problem adding the points as delimited text file with those coordinates as WKT.

For future use, make sure the csv has float coordinate data by adding .0 to the coordinates if necessary.

Or try to transform the data to EPSG:4326 and see if all points get displayed. Coordinates will most likely be float then.

HM, if I use the PostGIS way all 4 points are present ...

And QGIS shows them... 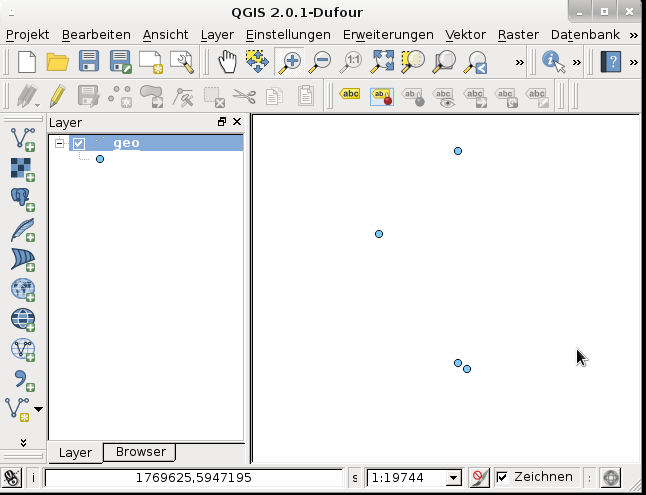 Not the answer you're looking for? Browse other questions tagged qgis postgresql or ask your own question.

3
How ensure data put into PostGIS gets proper CRS attached?