I have two files. A polyline shapefile of highways and a spreadsheet that contains beginning and ending coordinates with descriptions of segments of the highways. For example:

I need to create a new polyline shapefile that breaks up the highway segments from the original polyline file into a new one that has the beginning and ending coordinates from the spreadsheet.

The shapefile I am using does not have M values. The spreadsheet I have contain latitude/longitude coordinates that look to have originally came from the shapefile (they fall directly on top of it when plotted). I need a polyline file that matches the spreadsheet exactly. Meaning the spreadsheet would become the new shapefiles attribute table, and each record would represent a polyline that was extracted between the beginning coordinate and end coordinate. 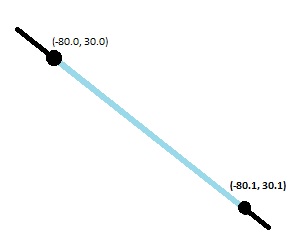 The black line represents the shapefile that I have. The two coordinates are examples of beginning and ending lat/lon coordinates that are in the spreadsheet. What I want is to extract the blue line from the shapefile into a new polyline file with the attributes of the original spreadsheet.

I have played around with making XY point layers out of my beginning and ending coordinates then splitting the file based on those new points. The problem is that my shapefile has more lines than I actually need. The resulting file doesn't split it completely the way I need, and I cannot find a way to relate my attributes from the original spreadsheet back to it. What I really need is a custom query that takes in a begin lat/lon, then an end lat/lon and queries the shapefile to get the resulting line. After it finds the new line it would take it to a new shapefile; copying the attributes over from the spreadsheet to be associated with the newly created line.

you have two pairs of coordiantes per line, so this look like points and not like linear referencing (which would use only 2 values, M start and M end). Therefore my suggestion is to create the two points in your spreadsheet using "Make XY event Layer". Once for the "begins" and once for the "ends". The next step is then to split your highways at the closest location from those points (split line at points). You then have your segments.

Not the answer you're looking for? Browse other questions tagged arcgis-desktop arcgis-10.0 editing polyline-creation splitting or ask your own question.

7
Calculating X and Y of line start and line end using ArcPy?
2
Getting First and Last Point coordinates of Polyline with Field Calculator in ArcGIS Desktop?
19
Retrieving start and end points for each line in line shapefile in ArcGIS Desktop or QGIS
0
Convert x y coordinates to polyline shapefile
0
Distance percentage of a point relative to a line end in ArcGIS
1
Creating polyline output from overlapping polylines in ArcGIS
4
Creating line layer from point layer with start and end attributes