Which format to choose to convert to ShapeFiles?

Given the following format options:

Which one is the best/easiest to convert the data into standard ERSI Shapefiles which contains the coordinates as well as the data attributes for each feature?

I tried importing KML and JSON via QGIS but the data attributes are squashed into a single column (see screenshot). Conversion via ogr2ogr was successful neither - it spits out a DBF file only. Conversion via csv2shp did not work at all - I could not figure out how to run the command. 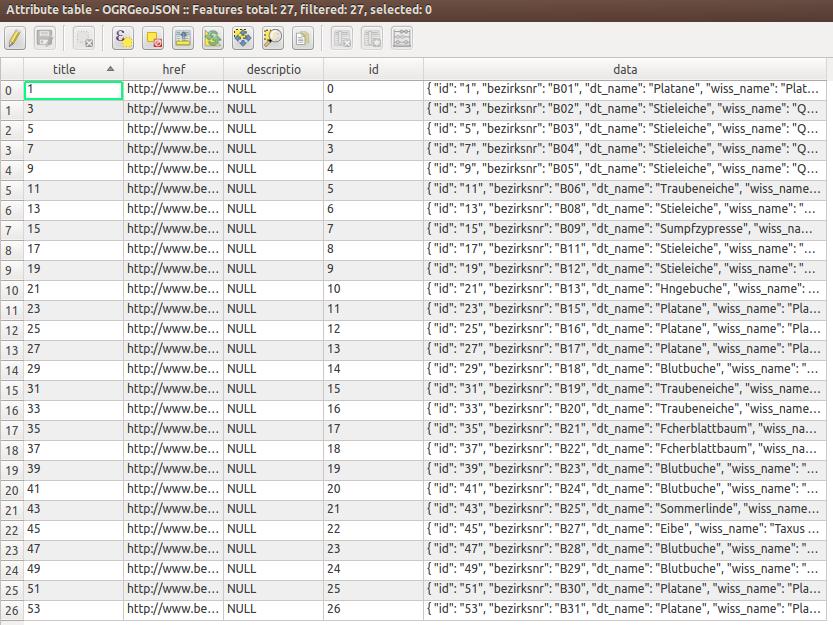 I came up with the following all.vrt as suggested by afalciano.

All features are printed to the console running: ogrinfo -ro -al all.vrt

You can easily add all.csv using semicolon as custom delimiter, laengengrad field as X and breitengrad one as Y. Finally save as SHP and you're done.

Sorry for the Italian ui.

Ansuming that XML stands for GML, that's the way I would go. I regularly use QGis to convert from ShapeFile to GML and vice-versa. The only issue that sometimes arises is wrong attribute types.

Not the answer you're looking for? Browse other questions tagged shapefile kml convert csv ogr2ogr or ask your own question.

6
ogr2ogr kml to shp conversion created 184 shapefiles?! What am I missing?
27
Using ogr2ogr to convert all shapefiles in directory?
6
Editing a KML file or converting KML to Editable format with attributes
5
How to convert KML with tracks to Shapefiles?
1
Convert MineSight (*.msr) files to Shapefiles or Feature classes
1
Convert shapefiles from WGS84 to Miller Projection
5
Debugging ogr2ogr "AddGeometryColumn failed" and "Terminating translation prematurely after failed translation of layer"
8
Batch Convert Folder of Shapefiles to KML / KMZ
8
PostGIS Multipolygon when converted to shapefile doesn't match the source geometry