Using Cartographic Representation (CR) I've created a nice feature symbol with a filled interior and sharp outline. It looks great on a map, on screen and printed. However I can't duplicate that symbol in the legend, as the regular Symbol Property Editor doesn't have the same level of control and edit options as the CR marker editor does.

Here's the CR marker editor, and the resultant symbol: 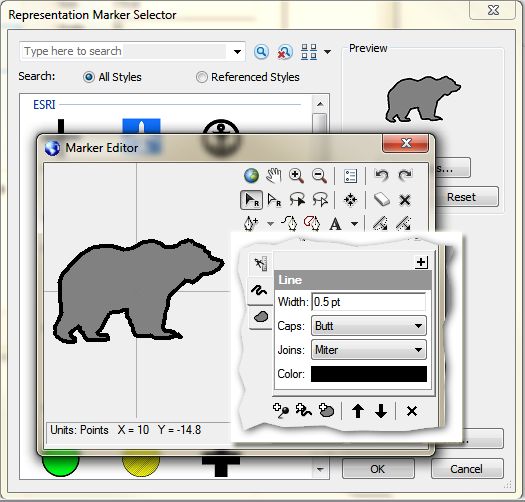 And here's the closest I can get with regular symbol editor, just not good or close enough. With stacked level character symbol the two don't line up at all, and with halo effect the effect is thicker on the right side than the left. 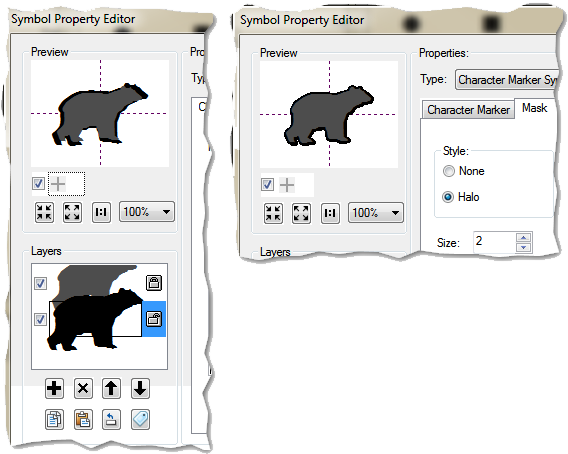 So, how can I export the CR symbol so I can use it in the legend (and elsewhere)?

We're not using live legend as it doesn't afford enough control over the result, for instance the size of the CR symbol can't be changed, even after converting to graphics.

I didn't find a way to export cartographic representation, so that need still remains to be addressed.

I did find a solution that worked for the current project though. My symbol is based on a font glyph, so I used Inkscape to load the font symbol, style it approximately the same as the CR symbol, export as EMF and embed in the map composition via Insert > Picture. I couldn't get a perfect match between the symbols, but it's pretty good.

The units for line/stroke width in the two applications bear little to no relationship to each other, so I just aimed for something that looked close (took multiple round trips to get sorted out).

In future I think I would explore creating the symbols in Inkscape first, and then using those in Arcmap right from the beginning (though the fact the way to convert .emf to CR markers uses VB6 doesn't bode well for this approach [ref]).

I also tried the speedier route of grabbing a screenshot of the CR symbol, deleting the background, and saving as PNG. However that failed because Arcmap doesn't respect the PNG transparency. (Which is just as well as the picture was kind of ugly anyway.)

Not the answer you're looking for? Browse other questions tagged arcmap cartography representation or ask your own question.