Let say I have two variables.

Here's what I have to get me to the last line. I don't know how to add the original file name of the mxd to the outputted PDF.

Updated: It will run through it, but it doesn't output anything. The output folder is empty. I think there's something wrong with the loop. Here's what I now have in my loop.

I tried the code below and still no dice. Here's what the results kicked back. 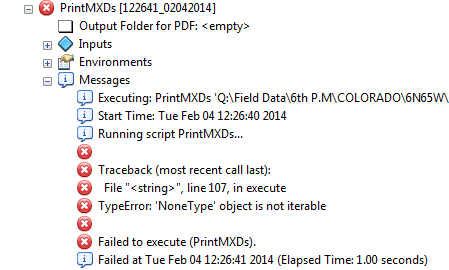 I'm not sure why it's saying the output is empty?

Update 2: I updated the code to this:

I changed the workspace to PDF_Folder and it didn't kick back an error. It also didn't output any PDF files.

Also, here's how my parameters are setup at the top.

Does my output need to be something besides a DEFolder datatype?

Input MXDs is a MapDocument that is a multiValue input. Output Folder for PDF is a DEFolder output. I've tried strings, workspaces, folders. Nothing has worked. I know its something small making this really frustrating. I'm going basic to see if I can get just one mxd outputted to a pdf. Crawl before I can walk.

I'm trying to run the command directly in ArcMap from the python window. Here is the kickback it's giving me.

I have tried just running it in a small script to see if it worked with a file name. It does and it includes spaces, commas, periods, dashes and underscores. Here's the simple testing code that worked. I have no idea what isn't working.

Give this a try to get the PDF name based on the input MXD lists name:

The parameters for the toolbox should look something like this: 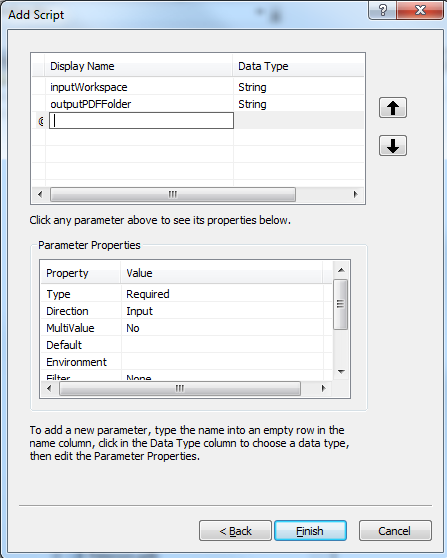 Here's the def execute code from my python toolbox.

Not the answer you're looking for? Browse other questions tagged arcgis-10.1 arcpy or ask your own question.