How can I get repeated vector grid in horizontal direction?

The extents difference horizontally and vertically was 100000 as appeared, and the parameter was 10000, and the result was exactly what I needed after I let the system to label my grid automatically by ID, starting from ID: 0 to ID: 120 for each layer.

The problem is that, if I needed to cover more area on the map, then I will be in need for a large number of layers to be set manually, and this will be a frustration!

So, Is there any way to tell the software to create a repeated layers horizontally, from the left to the right, and once it reach the end of the map, it needs to go vertically one step by a certain amount of extents difference?

Note: all of my layers are same in their parameters and extents differences, only the extents must be repeated in a constant shift, which it 100000 here.

This pic. might be enough to clarify my request: 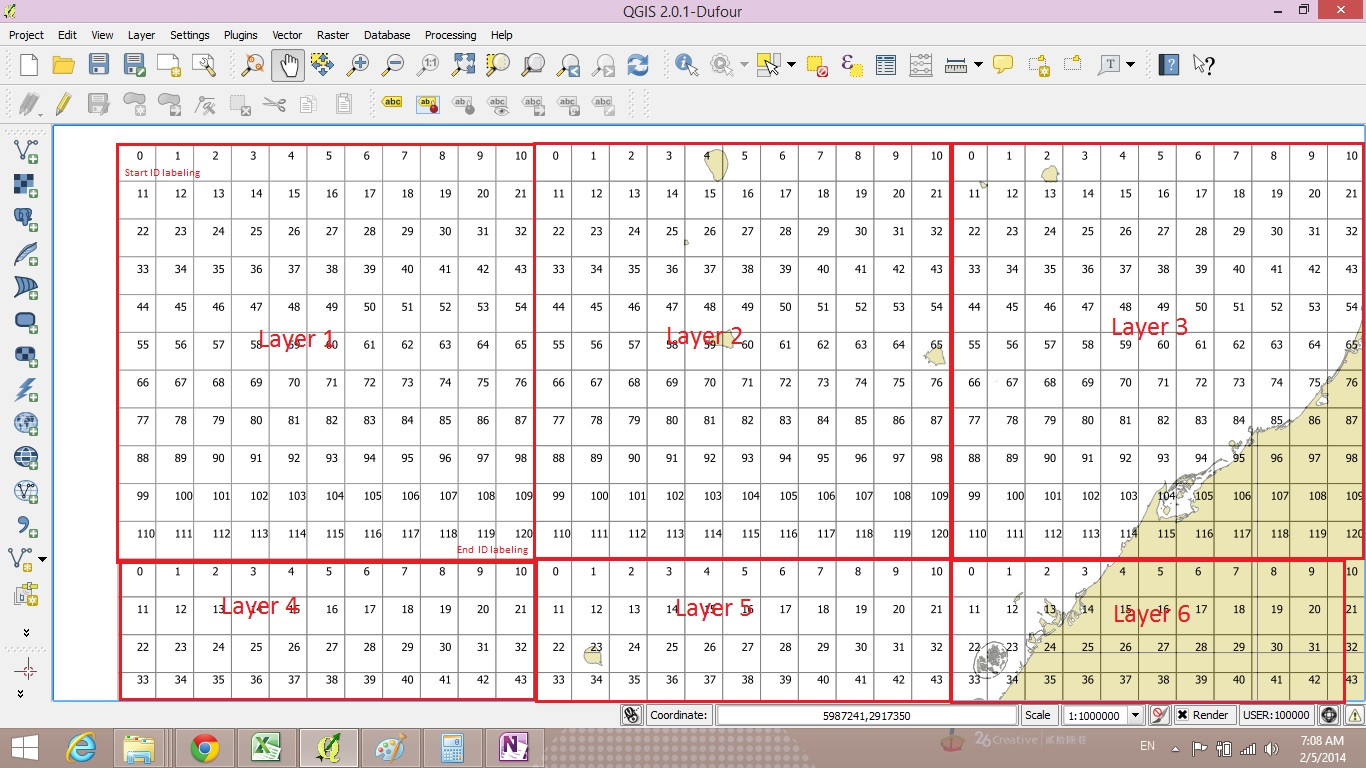 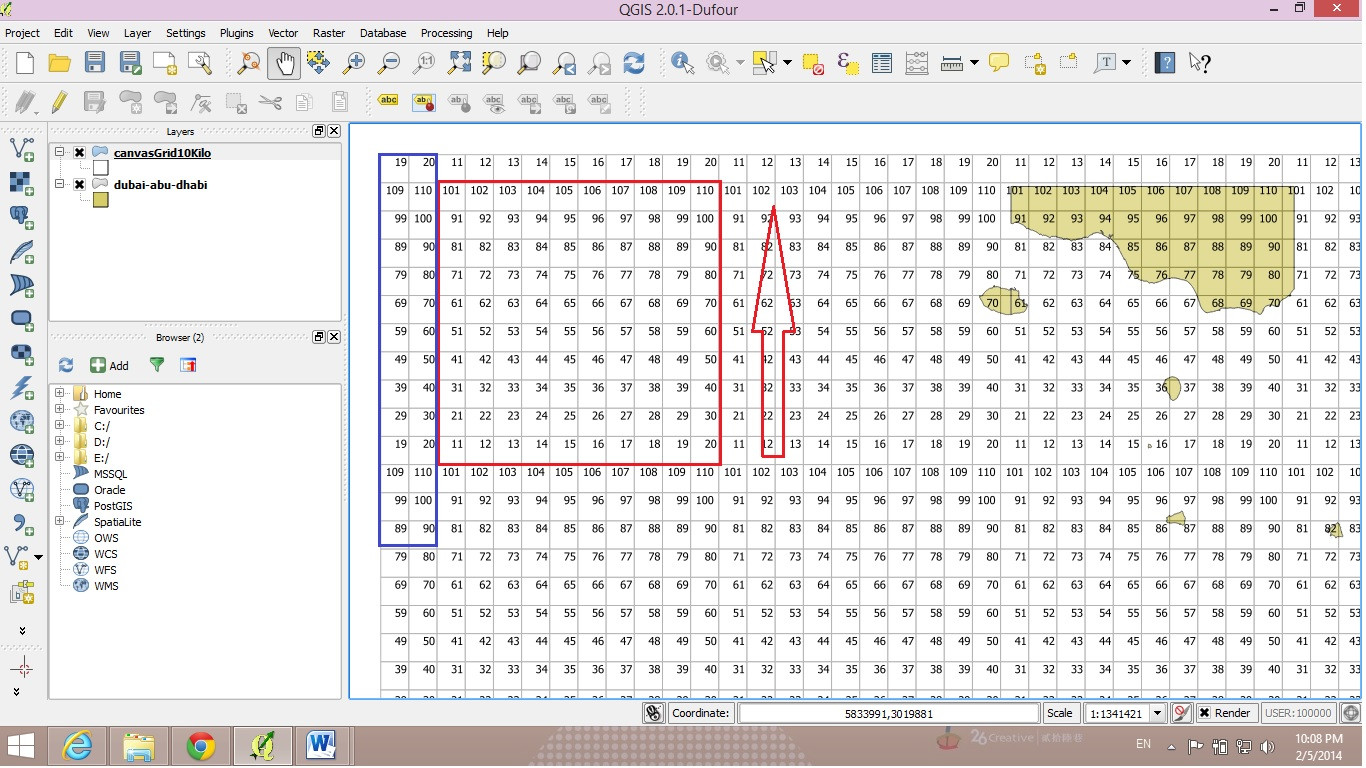 Now, I have some inquiries:

Is it necessary that your Layers contain 11x11 fields?

It would make it easier if you could have 10x10 fields.

You could create one polygon grid for the whole area of your interest; then label the small rectangles from 1 to 100 with the field calculator, and add the layer name in a second column.

Same for the layer grid with a raster 10 times greater.

Instead of creating a bunch of Layers I would prefer to have one layer, and filter the data to the layer you are working on with the second column created.

But I am not sure what you intend to do with the rectangles.

This is what I think you want: 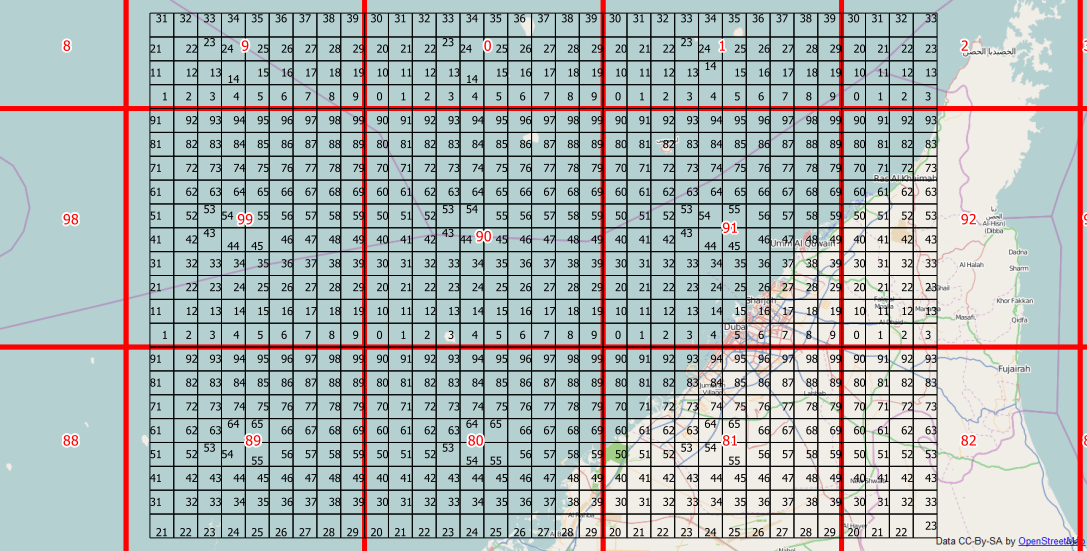 The black grid with 10000 meters spacing, the red one 100000 meters. Labelling with a custom function:

The number is always the 5. / 6. digit from the left of the EPSG:3857 coordinates Y and X packed together.

You can use the same functions to populate additional columns of the attribute table.

Aaron is correct. If you have a vector which the grid needs to cover, you can use the Vector Grid tool to make a grid with a specified grid size to cover the desired vector. Additionally, you can enter the coordinates that you want the grid to cover.

Not the answer you're looking for? Browse other questions tagged qgis vector-grid or ask your own question.

2
Automatically assigning numbers to point file in various order in QGIS?
1
How can I allocate a $rownum in reverse order in QGIS?
1
How to remove vector grid cells that don't overlap with features from a certain layer in QGIS?
1
sorting polygons extracted using Fishnet
2
Understanding "create-grid" output and getting grid points' coordinates
1
How do you automatically number cells in a grid with row numbers and column numbers (or letters)