In QGIS, I want to make polygons from a set of intersecting lines. Looking at the screenshot here, I want chop the purple line (it's a closed line, not a polygon) where it crosses the green and blue lines. The result hopefully would be a polygon where I have hatched in red. I have quite a few to do. 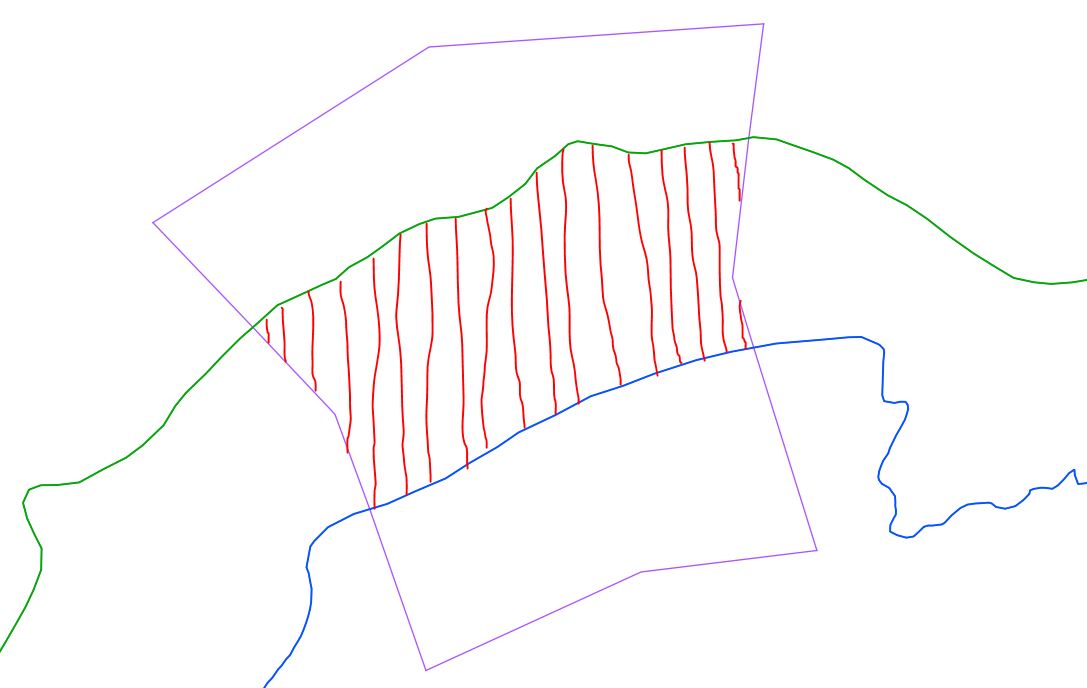 I have tried the QGIS tool previously called Polygonizer (see An Introduction to the Polygonizer Plug-in), but now called Polygonize. This is a tool that, given a layer containing a set of crossing lines arranged essentially like a # symbol, should create a polygon from the enclosed space in the middle.

(In QGIS 2.01, Polygonize is in the top menu bar: go to Processing -> Commander, then type "Polygonize" on the command line, select "Processing algorithm: Polygonize" from the list that appears, and press Enter.)

At the momemt Polygonize doesn't work properly. Is there another way to do what I want to do?

For example, wouldn't it be great if the QGIS 'Split Feature' command was able to work like MapInfo's 'Polyline Split', where you select the polygons to split, then select an already-drawn polyline to split by, and voila. But Split Feature seems not to work that way.

The routine processed an output from my shapefile, but did not create a polygon from the region enclosed by intersections between the blue, green and purple lines. (Note: in the actual input file, all these lines are on the same layer; the screenshot just colours them differently for illustrative purposes). What I got instead was a simple conversion of the purple outline to a polygon, as though the program completely ignored the blue and green lines.

When I node-edited the closed purple line, to open it so that I had a set of open crossing lines like in the # symbol, and then ran Polygonize again, nothing happened. No crash, but no visible polygon in the output file.

When I used Nick Hopton's own Laxton.kml data, I got a crash; see screenshot: 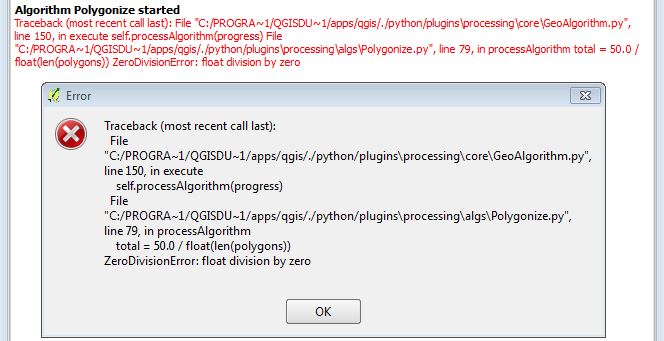 According to this Topic: How to go with...somewhat complex geological maps in QGIS? the polygonizing in QGIS 2.0 and 2.2 fails due to some problems with the shapely library. It is fixed in current QGIS Master (2.3.0).

Unfortunately, it does not work with QGIS 2.2.0 from the same OSGEO4W setup. So we have to wait for the stable QGIS 2.4. According to http://qgis.org/en/site/getinvolved/development/index#road-map this should be in June. So not far away.

The problems with 'Polygonize' appear to have gone away in recent builds of QGIS (in later builds of 2.4 and in 2.5).

Perhaps it's time for this topic to disappear too, rather than being bumped by 'Community' every so often.

For getting correct results from the polygonize tool (which can be accessed via Processing > Commander) it is necessary that the lines intersect, this is also stated in the pdf file http://confound.me.uk/maps/ppv4.pdf

Polygonize extracts points where lines intersect and uses them, together with points from the original lines, to construct polygons

According to your errors using this tool I assume, that the lines of the triangle are not closed on every edge and the lines inside the square also do not intersect the square itself.

In OPEN JUMP GIS there is a good running editing function which make polygons from a polyline network:

Polygonize... - all the enclosed areas inside crossed lines can be transformed in polygons. Optionally input data may be noded before polygonization (http://ojwiki.soldin.de/index.php?title=Tools)

Not the answer you're looking for? Browse other questions tagged qgis qgis-plugins or ask your own question.

2
Making polygons from lines (polyline to polygon) in QGIS?
6
QGIS - Create equal length polygon along polyline
4
How to go with...somewhat complex geological maps in QGIS?
3
QGIS 2 Python error on Mac OSX
4
How to Polygonize a polyline shapefile in QGIS 2.2?
5
Generating polygons with streets as borders using QGIS?
2
How to split Polygons by line grid?

3
Splitting and ordering lines by polygon intersection?
4
How to Polygonize a polyline shapefile in QGIS 2.2?
1
How to have newly added lines split existing lines where they intersect, using QGIS
1
Need help making polygons from lines in QGIS
6
Splitting line if one or more polygon layers intersects at same time using QGIS?
3
Selecting lines intersecting lines on two points in QGIS 3.14
2
Split layer with lines or with Polygonize (and keeping all features intact) - QGIS 3.18