What might cause "python.exe has stopped working" when closing ArcPy script?

I created a script that takes a .tab file and joins it to a shapefile. The script works perfectly but when it finishes, it gives me an unhandled exception which crashes Python.

I don't know what might be causing it but I think I have identify where it's happening. I wanted to ask if someone could help me identify the problem so I can fix it. I'm using ArcPy 10.1 and Python 2.7. I think it's happening in this part. For all the variables I get values prior to this portion of the script. I do the same calculation for other fields so this code repeats itself but for different columns.

I can provide the entire script if needed but by commenting sections, this portion is what makes Python not close correctly when done with the script. 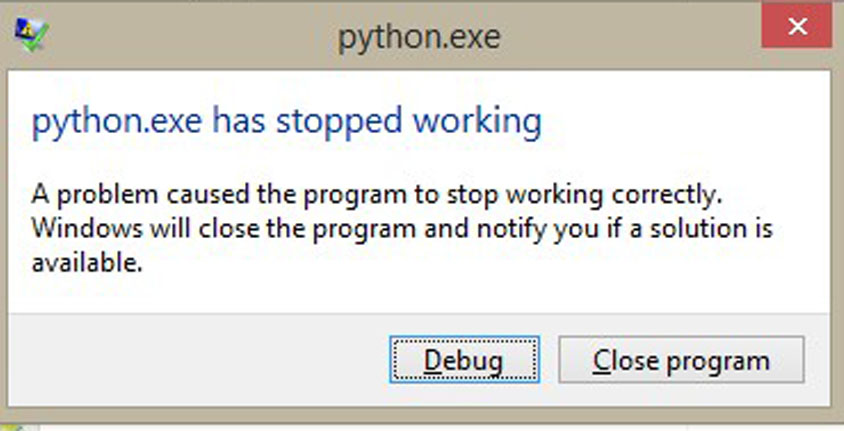 This is an simply an arcpy bug. You can try to avoid using the steps that are causing the crash, but it generally happens under different tools when used to process through a long list of data. The only workaround I have found is to make my script save its progress along the way to disk so if you restart the process, it knows where to pickup from. If you then disable windows debugger message by altering the registry (see below), you can then just repeatedly execute the script in cmd.exe until it completes the entire batch.

I know this is an awful workaround, but it is quite uncommon to have a python library kill off the python interpreter.

Maybe a little late to this, but I'm hoping others can benefit from my solution also. I ran into the same issue, where I got the python.exe has stopped working during the arcpy.CalculateField_management function. Lucas Fortini mentioned here that it might be due to having large lists of data, i.e. too many features. I have >1 million polygon features, and growing. I fixed it by using the arcpy.da.UpdateCursor instead of arcpy.CalculateField_management. Here's a snippet of my code:

Changing the expression type to VB may not always solve the problem, as VB won't allow for spatial calculations. One solution may be to use the 64 bit version, allowing for improved processing. This creates other potential problems with running (most likely) two separate Python versions but it's the only work around I've found. A few of the potential confusions are explained in this ESRI blog post. https://blogs.esri.com/esri/supportcenter/2013/07/29/64-bit-vs-32-bit-python-explained/.

Not the answer you're looking for? Browse other questions tagged arcgis-10.1 arcpy python-2.7 pythonwin or ask your own question.