Measuring accuracy of latitude and longitude?

Do fewer decimal points affect accuracy, and what does every digit after the decimal place signify?

Accuracy is the tendency of your measurements to agree with the true values. Precision is the degree to which your measurements pin down an actual value. The question is about an interplay of accuracy and precision.

As a general principle, you don't need much more precision in recording your measurements than there is accuracy built into them. Using too much precision can mislead people into believing the accuracy is greater than it really is.

Generally, when you degrade precision--that is, use fewer decimal places--you can lose some accuracy. But how much? It's good to know that the meter was originally defined (by the French, around the time of their revolution when they were throwing out the old systems and zealously replacing them by new ones) so that ten million of them would take you from the equator to a pole. That's 90 degrees, so one degree of latitude covers about 10^7/90 = 111,111 meters. ("About," because the meter's length has changed a little bit in the meantime. But that doesn't matter.) Furthermore, a degree of longitude (east-west) is about the same or less in length than a degree of latitude, because the circles of latitude shrink down to the earth's axis as we move from the equator towards either pole. Therefore, it's always safe to figure that the sixth decimal place in one decimal degree has 111,111/10^6 = about 1/9 meter = about 4 inches of precision.

Thirteen decimal places will pin down the location to 111,111/10^13 = about 1 angstrom, around half the thickness of a small atom.

Using these ideas we can construct a table of what each digit in a decimal degree signifies:

The Wikipedia page Decimal Degrees has a table on Degree Precision vs. Length. Also the accuracy of your coordinates depends on the instrument used to collect the coordinates - A-GPS used in cell phones, DGPS etc.

If we were to extend this chart all the way to 13 decimal places:

Here's my rule of thumb table...

Latitude coordinate precision by the actual cartographic scale they purport:

POINT #2. Lets consider the latitude of the point

If you are going to speak in cm or mm scale, it may be better to also consider the earth as an ellipsoid and not a sphere. Then as soon as you model the earth shape as an ellipsoid (two-axis ellipsoid), you can not map degree decimals to ground distance with a single table, because this relation change (for E/W distance measurements) with the change of latitude. Here is another table to show the changes:

I think this XKCD is a perfect answer to this question :) 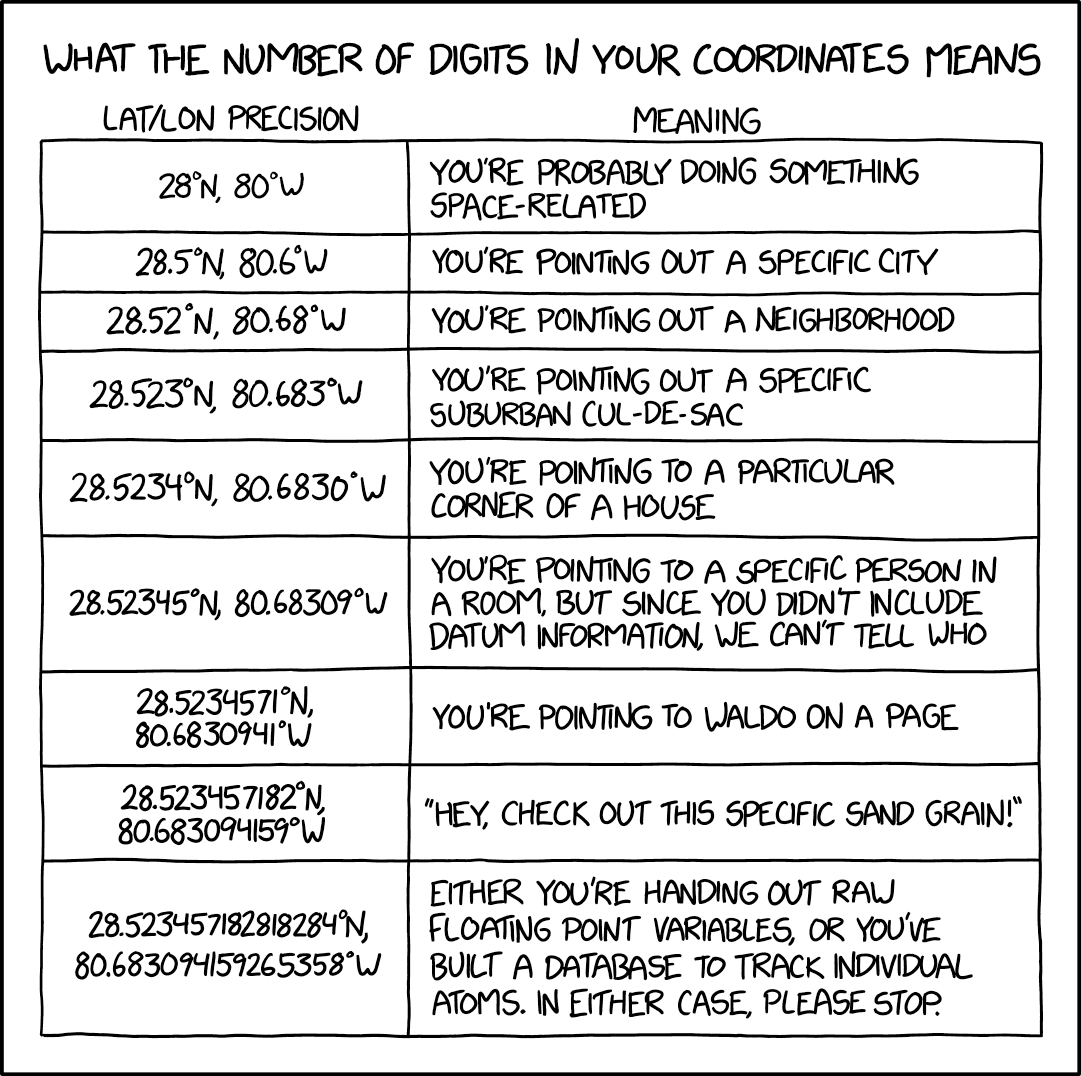 For fractions of a degree, you divide it by 10 for each decimal place, as @ChethanS's chart nicely demonstrates (in km):

You'll notice that 8.5 km is less than the corresponding distance of 11.1 km for the first decimal for latitude at the equator, and so the nominal precision of the higher-latitude measurement is higher.

Not the answer you're looking for? Browse other questions tagged latitude-longitude accuracy gis-principle precision or ask your own question.

6
Precision of x decimal points in meters?
3
Decimal degree coordinates: how many decimal places to use for ...?
2
Degree Precision vs. Length
0
How can I tell the accuracy of coordinates conversion by cs2cs?
1
Is there a standard as to how many meters or feet if a GPS number (latitude and longitude) is off by a tiny amount, such as 0.0001?
1
Converting DMS to decimal degrees, what precision?
0
What is the accuracy of DMS coordinates that don't contain any seconds
0
can lat long of a place could have different precision from google maps
30
Calculating intersection of two Circles
31
What is the precision of Geohash?
See more linked questions