In ArcGIS Desktop 10.1, I am trying to create a marker symbol (and then save the symbol as a style), but the origin of the items makes them rotate improperly (see pictures).

Is there any way to merge all of the layers of the symbol? Or modify the origin of rotation?

I am using the simple marker with multiple layers. The circle is the default circle with a second smaller white one added on top to create the label box. The main problem is the triangle should rotate around the origin of the circle, but I don't know how to modify this is the style editor. Thoughts?

I reproduced your problem and noticed that rotating behavior depends on the marker types used to create your multi-layer marker:

Use character markers instead of other marker types if you want a multi-layer symbol to be rotated as a whole.

Each Simple Marker, Arrow Marker and Picture Marker layer rotates about its own center. This eventually breaks the layout of your multi-layer symbol if non-zero offsets are used. 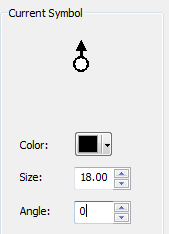 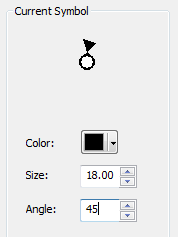 (Above example: rotation of a symbol, consisting of multiple simple markers and an arrow marker.)

Use character marker symbols for all layers with non-zero offset in order to avoid individual rotation of your symbol layers. However, you are bound to font symbols and their available characters. (If you are looking for simple arrows and such, most probably you find what you need.) 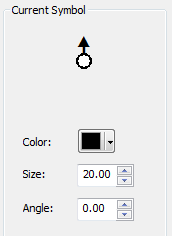 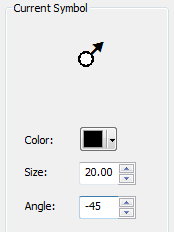 (Above example: rotation of a symbol, consisting of multiple character markers.)

If these options do not fit your needs, you could design your marker symbol with any graphics software (e.g. Inkscape or Illustrator for vector graphics) and import it to ArcGIS as a single picture marker symbol. (Possible file formats include emf (vector graphics) or png or bmp (raster graphics).)

The "silver bullet" would be to create your own font (this also supports anti-aliasing in contrast to picture marker symbols) and use a single character marker symbol. However, this is most likely disproportionate (and inflexible to changes) for a single symbol.

Not the answer you're looking for? Browse other questions tagged arcgis-desktop arcgis-10.1 symbology or ask your own question.

5
Which true type editor do you use to create/modify point symbols for GIS?