Using this site, we can see that the (approximate) centre of Southampton, UK has OSGB coordinates of 441847,112279. However, looking at the UK grid, where each large square is (500 km)2, then these coordinates don't seem to follow: where does the leading number come from? The traditional 6 figure grid ref for the location is SU418122; given a 6 figure GR denotes a (100 m)2 area, this shows that the location is 41.8 km east and 12.2 km north of the SU grid square origin. Does the extra figure not denote an order of magnitude larger in distance?

Those leading figures you ask about are the Eastings and Northings of the SW corner of the "medium" square "U" which is inside its parent large square "S".

Now, the labeling pattern is the same for both large and medium squares (i.e., the A, B,C ... X, Y, Z pattern also exists inside each large square), so each medium square has a unique two letter label -- one for its parent, one for itself.

The following index map is from Using the National Grid, a two-page consumer guide. I added two red dots for the sample locations that follow. 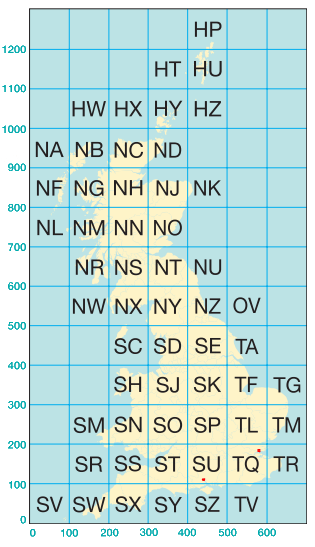 Another example: my home town of Leigh-on-Sea, on the North of the Thames estuary, is at TQ845858. This means its

The combined graticule and grid in the map below is from A guide to coordinate systems in Great Britain, a good 43-page technical document. 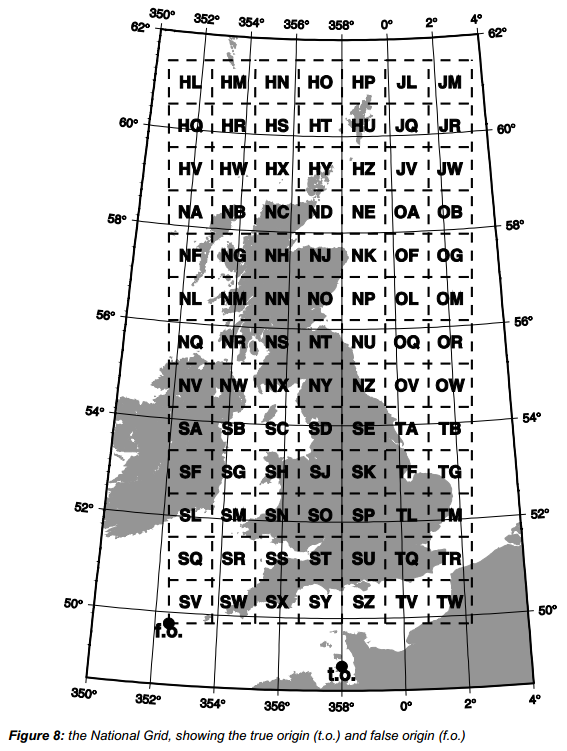 Notice the relationship between the "false origin", the "true origin", and the SW corner of the ref. square SU. (It should explain the honest confusion in Brad's answer.)

Not the answer you're looking for? Browse other questions tagged coordinate-system ordnance-survey or ask your own question.