QGIS select features from attribute table using the "LIKE" operator

I created an expression with the help of the GUI in the QGIS attribute table of a vector (shapefile) layer of Native American ("Indian") reservations in the USA state of New Mexico.

The full "NAME" in the desired row is 'Picuris Indian Reservation' . I don't mind typing the whole name, but in principle, is not the LIKE function supposed to find partial matches? That is, if I want 'State Hwy 68' (which is in the FULLNAME field) (of a different layer), will the LIKE operator not find it if I use "FULLNAME" LIKE 'Hwy 68' ?

You can also use the column filter of the attribute table. It works default as a 'like' expression without the % wild card. 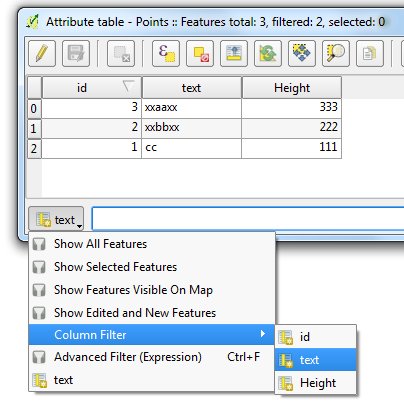 Result when typing a:

[Posted earlier as an "edit" to my own question. Per Sorin's advice, I'm changing this to an answer instead of an edit.]

I think I may have solved it. I used a percent sign ( % ) as a "wild card" along with the LIKE operator, and it looks like I got the expected search results. Example 1: In a roads shapefile layer, "FULLNAME" LIKE '%68%' produced a selection of many roads and highways with the consecutive digits "68" in the name -- such as "State Hwy 68", "State Rte 68", "New Mexico Route 268". Example 2: In a Native American lands shapefile layer, "NAME" LIKE 'A%' produced a selection of "Acoma Indian Reservation" and "Alamo Navajo Indian Reservation".

I was having difficulty doing this in a filter in a layer using QGIS 3.20.1 in Select by Location Query builder. I found ILIKE worked because it matches "case-insensitive."

Now I have a filter on a layer "OWNER_FULL" = 'SCHOOL BOARD OF COUNTY' that returns 256 rows when I hit Test. But if I try "OWNER_FULL" LIKE 'school board%' I got no rows.

But when I did "OWNER_FULL" ILIKE 'school board %' I got 260 rows, so that showed me percent sign worked and the ILIKE was the best.

Not the answer you're looking for? Browse other questions tagged qgis attribute-table select-by-attribute or ask your own question.

5
How to escape percent in a LIKE expression in qgis?