How to disperse clusters of proportional markers or polygons?

I am mapping a set of points in ArcMap that are symbolized using proportional marker symbols based on a numeric field value. The scale of the map has lead to alot of the point markers overlapping. 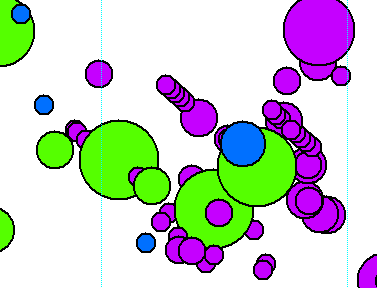 I would like to disperse the markers so that they are not overlapping. A random dispersement would be fine, preferably with control over the spacing between the dispersed markers. It seems that proportional symbols can't be converted to representations (else I could have used the Cartographic Refinement - Disperse Markers tool).

I could buffer the points by the numeric field to create polygons instead of using point markers to get around the representation issue, but is there a way to disperse polygons away from each other so they are not overlapping (similar to the functionality of the Disperse Markers tool for points)?

I'm using ArcMap with an Advanced License. Thanks

Check out this link: http://blogs.esri.com/esri/arcgis/2008/08/01/how-to-scatter-marker-symbols-for-stacked-or-clustered-point-features/

I think that might help you with what you are hoping to do.

Not the answer you're looking for? Browse other questions tagged arcgis-desktop clustering or ask your own question.

4
Is there a way to "disperse markers" across multiple point layers?
33
How to hide "internal" polygon boundaries?
1
Offsetting Points by location
0
Label point according to cartographic representation position instead of geometry
11
Displaying attributes upon their polygons within ArcMap legend?
3
Creating proportional symbol map in ArcMap based on two different layers (polygon and points) using ArcGIS Desktop?
0
Disperse markers with multiple attributes?