I'm currently working in Vietnam as a climbing guide, but am putting my GIS skills to use by doing a side project for the company involving the mapping of climbing routes. Along with another employee who is an app developer, our goal is produce a digital guidebook for the area.

For this project to work for me, I need to be able to take fairly accurate GPS points, as there are features just a few meters apart from each other that need to be distinguishable, but obviously survey grade equipment is not and option for me here. I've been using the app GPS Averaging to take several hundred points for each location.

Despite taking these averages, I'm having very little luck achieving accuracy in my output points, and I suspect my precision is low as well because the in app reported error gets very low (0.8m) after about 20 collected points, then goes up to about 3m after 200-300 collected points. However when I import these points, the actual errors appear to be well beyond 3 meters.

What can I do to improve GPS point accuracy from a mobile device?

I've currently only worked on this with android devices, but have access to ios devices too if they provide superior GPS chips.

I've done exactly the same thing for the same purposes - creating GIS-based rock climbing guides using GPS points taken with a mobile phone. I collected my points using an iPhone and the iGIS app. What I liked about iGIS was its ability to read/write directly to shapefiles, so you can get your attribute schema all setup outside of the app.

Screenshot of some climbing route points that were collected: 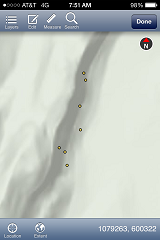 As far as improving the accuracy of taking GPS points under cliffs and in tree cover - there's not alot you can do (especially using a phone). Speaking from personal experience, even a survey-grade RTK GPS unit struggles under these conditions to get a lock sufficient for taking high accuracy locations. This is due to interference and obstruction of the signals the unit is trying to reconcile to produce accurate point solutions.

For a rock climbing guide, however, the points likely don't need highly accurate absolute positions (exact lat/long coordinates for example), but rather accurate relative positions to each other (so that once a climber gets to a certain area in the guide, they can easily distinguish nearby routes from one another).

Using a phone, my methodology to try to get things as accurate as possible were: 1) take multiple points as you were doing and average the coordinates 2) near large cliff faces, if possible take the points at right angles away from the cliff so that the cliff is less of an obstruction; and then move the points back to the cliff face during the mapping phase using aerial imagery or topographic data 3) for close-space climbing routes, take control points in areas that are less obstructed, and then use a long tape measure to take measurements from those control points to the routes; then map the points using your sketches later

A sample of the finished guide: 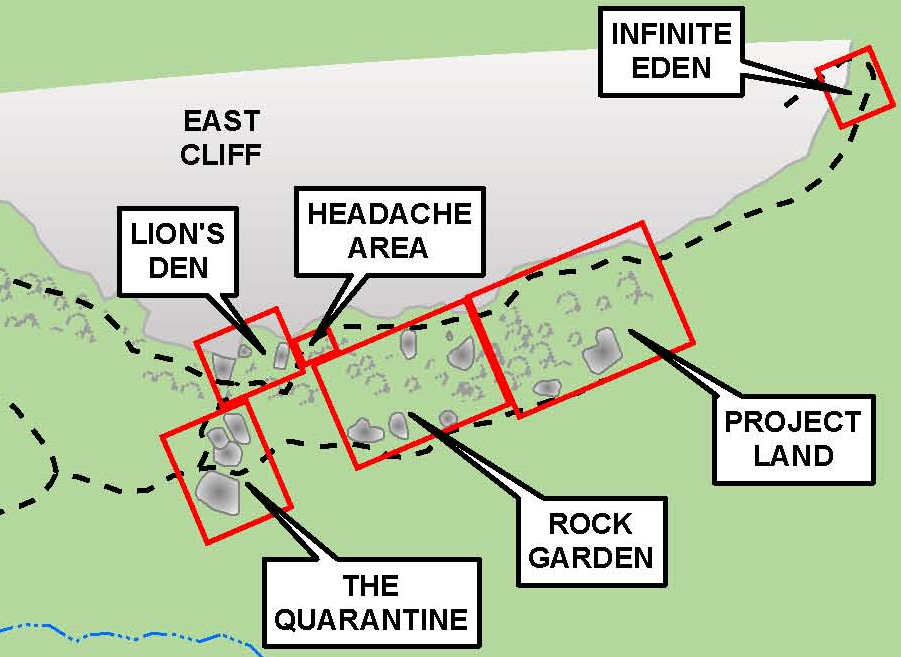 In this case you might be more precise if you fine tune your points on a computer later. For example try to note the position of the point relatively to a tree or any other significant feature in the landscape.

Anyway, even if you position your point perfectly at the right place, it is very likely that the user of your guide won't have a better GPS than yours. It would hence be a kind of "overkill" to locate your point at a < m precision if nobody will use a device with that precision to find them.

Finally, and this is in the same direction as #mpianka above, it is more important to locate your points correctly relatively to each other rather than absolutely on a geodesic system.

It may not be your gps readings. The map base is unlikely to be as accurate as your readings. You are probably/possibly experiencing the difference between absolute position and relative/cartographic/ortho position. Unless the area you are surveying has been mapped to high accuracy putting your position on it may well appear innaccurate.

Im not sure if the algorithm has been developed and deployed widely, but there is a way to improve the accuracy using multiple smart phones sharing information.

and "Centimeter Positioning with a Smartphone-Quality GNSS Antenna"

I don't think that GPS coordinates will ever provide you with the accuracy required for identifying individual climbing routes. As you will know yourself routes will often criss-cross each other or traverse from one XY position to another.

Some may also be overhanging, which would significantly reduce the chances of you, or your users, acquiring an accurate position.

I think that your best approach would be to break your climbing areas down into sectors. You could then use GPS as a guide to the sector and traditional oblique topo imagery for route identification.

There's been some really interesting work done on interactive topos here in the UK. Take a look at this "Zoom Topo" on the British Mountaineering Council website: https://www.thebmc.co.uk/zoomtopo/cloggy/

Not the answer you're looking for? Browse other questions tagged gps android mobile ios or ask your own question.

9
Seeking native spatially-enabled SDK to deploy GIS data on iOS and Android mobile devices?
25
How much sense does it make to average (lat,lon) samples in order to increase 2D accuracy of a GPS location?
9
Using android phone to plot GPS points?
0
ArcGIS mobile to use external GPS device
2
Mobile GPS location and CAR GPS location showing different outcome
0
develop own mobile app connecting with external gps receiver
2
Dual channel GNSS for setting GCP's
3
How can I find the average bearing using a set of zig-zaggy coordinates, knowing the user travelled in a straight line during that period?