I've got a shapefile that I would like to convert into a raster, but the trick is that the attribute I want a raster version of is character data. I'm familiar with geoprocessing using GDAL (in the command line) and R, so solutions using either of those two are preferred. However, I have access to QGIS if necessary, and even ArcMap.

I'm using this shapefile. It contains polygons of municipalities in part of Brazil. The attribute NAME_2 is the name of the municipality, and I want a raster version of that.

I know that you can't make a raster with characters, so I created a numeric version of NAME_2 in R by doing

Values in munisCrop.shape$NAME_2_NUM range from 1 to 787.

I was hoping to then use gdal_rasterize on my command line (GDAL version 1.10.1 on Mac OS X 10.9.2) to make a raster version of the shapefile. Here's the code I was trying (separate lines for clarity):

This completes easily enough. However, when viewing munisCrop.tif in QGIS, I see that the data range from 0 to 255. This is confirmed in R with

I think I understand why this is happening but can somebody really explain it to me and suggest a workaround?

I've tried various options in gdal_rasterize instead of -ot UInt32 (for example, BYTE), and the result is always the same. I've also tried rasterizing it in R:

But that seems like it takes forever. gdal_rasterize is way faster (a matter of seconds instead of... indefinite), so I'd love a solution using that.

255 is the default NoData value in QGIS.

I am not sure, what exactly the problem is with the way you tried it, but you could use the GDAL Python bindings to do what you want. For instance the following script converts your shp to a polygon based on the attribute NAME_2_NUM.

Rasterize your sip based on the attribute Name_2_NUM 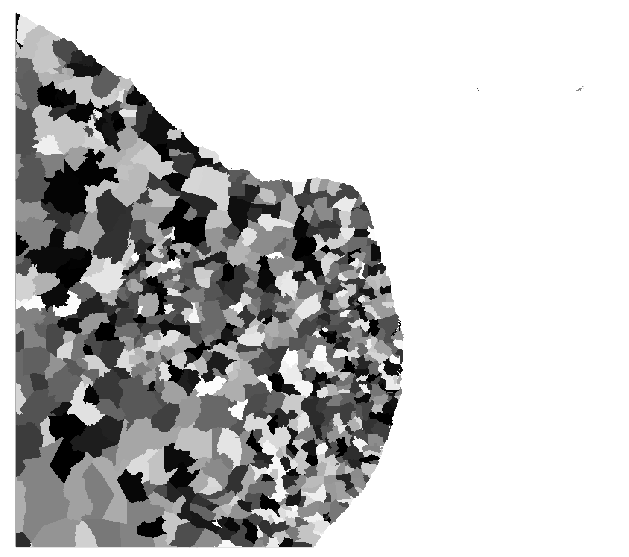 I have no problem with the speed of the calculation with the function rasterize:

Not the answer you're looking for? Browse other questions tagged raster shapefile gdal polygon r or ask your own question.