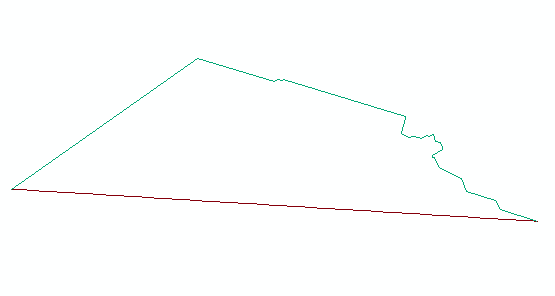 I am looking for a method to quantify the error or distance between them, something that attempts to capture the overall variation between the two lines, not just the greatest or shortest distance between them (The shortest distance would also be 0 as they have the same start and end points). I have considered closing them into polygons, then dividing the area by the straight-line distance to get an 'average polygon height'. I have also considered converting one set of lines into points and then averaging the distances generated from the Near tool for each line feature. However to do this I would have to delete the end points as they are essentially false '0' distances.

Are there other methods to compare these features? An important aspect to note is that sometimes the least cost path line crosses over the straight line so I would often have two polygons.

I know this is an old post, but I look at this and the first thing that comes to mind is sinuosity.

Sinuosity is defined by the length along a polyline divided by the shortest distance from start point to end point. This seems like a reasonable metric for determining the difference between the two lines.

There are several posts on this site which relate to sinuosity.

You can also read more about it on Wikipedia.

There is also a python toolbox for ArcGIS.

Quick solution: Using the difference between the total lenghts of the two lines.

Not the answer you're looking for? Browse other questions tagged arcgis-desktop arcgis-10.1 distance or ask your own question.