I tried to perform a 1-to-many spatial join between polygons (target feature) and lines (join features) to join the lines that are completely covered by a polygon to that polygon. (the polygon is actually a result of buffering the lines with a dissolve option) I used the option 'completely contains', but this returned a background processing error. After sending parts of my data to Esri Inc, I got the confirmation that there is indeed a bug they need to fix (#NIM086228).

Anyway, my project needs to be completed. In search of a work-around, I already tried to turn the lines into polygones (small buffer around it), but it returns the same error. When trying the contains_clementini (or actually all contains and within options) suddenly give me an error even before running it. The error is 'Relationship invalid for selected layers'.

Here is what I need to do:

I have (pipe)lines that I want to 'merge' when they have common characteristics. So I create a buffer and let it dissolve when the value of those characteristics is equal. A polygon layer is created, but there is not link back to the underlying lines that are the basis of the polygon. In order to have these ID's, I wanted to perform the spatial join with match option 'completely contains

Has someone any experience with the last type of invalid error messages or another workaround for me?

According to my understanding, you want to get the id from some Polygon, into the buffer features which are contained within the given polygon.

These kind of spatial operations and queries are quite easy to do in a spatial Database like PostGIS or even SpatiaLite. You just need to be handy with SQL.

I'll suggest that you export your data to shapefiles. Using the Spatialite-GUI, you can load them into a spatialite database, and then do spatial queries on them. 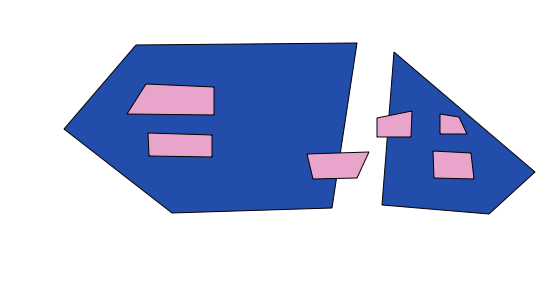 Here the Blue Polygons are your Boundry Polygons, and Pink are the buffered polygons. Each has a field called f_code (I'm just using this as an example, since we need to use it in the update query below; You will have to change the field names in the update query to match your data)

Not the answer you're looking for? Browse other questions tagged arcgis-desktop arcgis-10.2 spatial-join or ask your own question.