I am trying to understand if the Landsat 7 satellite ETM+ orbit has any significant azimuth or if it could be assumed as 0° (as it is not a pointable sensor). I searched in the web but could not find any good answer so far. Zenith is supposed to be equal zero as Landsat images are always nadir.

What about the azimuth?

The image looks like a sort of isosceles trapezoid, with the major basis towards the North (as I would expect for the Northern Hemisphere). It is also tilted differently from south to North (as I also would expect).

One question arose while I was trying to solve my task. The metadata file of Landsat provides coordinates of the four image corners. Anyway they refer to the black background.

The azimuth is intended to be calculated through these corners or the corners of the "real"-non-background image?

And why do I have to use latitude rather than longitude?

Is it not better to use longitude?

I thought to use (for instance) the right corners, subctracting the longitudes of them (e.g. upper right long-lower right long) and obtain what I was looking for in terms of degrees, does it make sense for you?

Here is an image showing a part of Landsat paths in a Worldwide Reference System (descending orbit) and my Landsat scene. RS is geographic, WGS84. According to this what I should looking at is the non-background image. 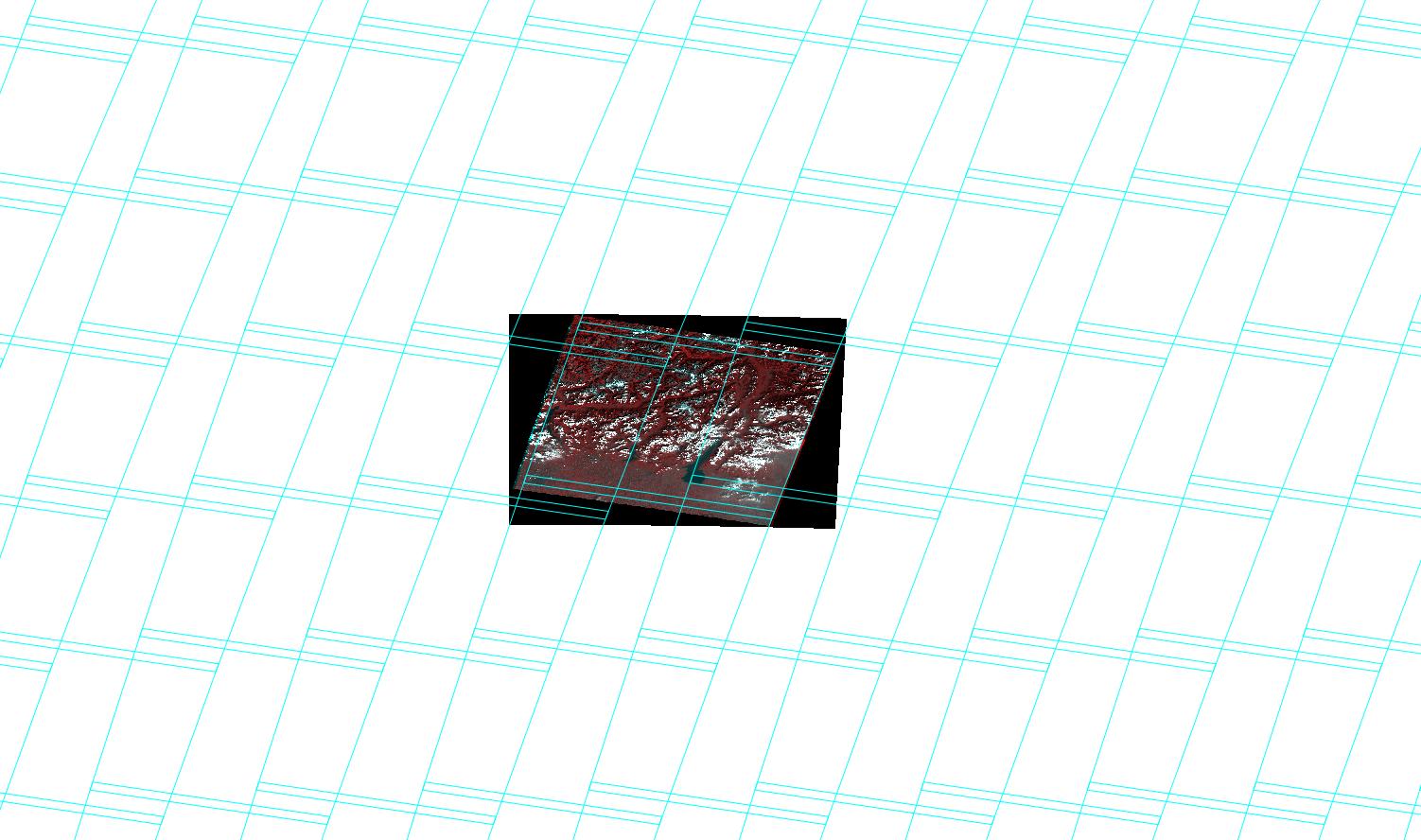 Since Landsat satellites are not placed a true polar orbit -- they are in a "near polar" orbit -- their heading (azimuth) is never zero. See NASA's Landsat Handbook and Landsat Science. It is closest to zero at the equator (8.2°) but deviates from this the closer it gets to the poles. Thus, yes, knowing the center coordinates (latitude, actually) of the image could be used to determine its orientation. However, it may be easier to estimate the orientation from the coordinates (lat & long) of the corner points of the scene.

The trapezoidal shape of the scene is due to the significant amount of earth rotation that occurs during the scanning of the scene while the satellite is moving in its orbit. Ideally, you would correct for this.

From the 2nd ref, "Inclination: 98.2°" I assume that is the tilt of the orbital plane from the equatorial plane, measured at the equator. And that implies an angle of 8.2° off the plane of the meridian. As the satellite it approaches the poles it's azimuth will approach +/- 90°.

Well done for persevering. If the meta data only give the corners of the Black rectangle as you state, then you are correct: my simple solution above is useless without knowing the coordinates of the actual skewed image inside.

My reference to latitude (the position) determining orientation was along this line of reasoning: knowing the satellite's orbital parameters, you can relate time, position and orientation. You'd need to understand spherical-geometry, though.

And, as you say, you can estimate the orientation via the relative latitude and longitude of the sides of one of the "big black triangle", if you happened to know them.

Not the answer you're looking for? Browse other questions tagged landsat angles azimuth or ask your own question.