How can I switch line direction in QGIS?

Something that is hopefully pretty easy.

I would like to be able to swap the direction of a polyline/line in QGIS. I made a custom tool to do this in MapInfo a couple of years ago, however I can't seem to find anything for QGIS.

Does anyone know of a tool to do this?

If one doesn't exist then I'm happy to have a go at making it, just didn't want to if one has already been made.

Ok here is the Python that I used to do it:

Before running the above code:

Run the above python code by:

It should output "True" for each feature whose direction was swapped. If it outputs "False" then it didn't swap that feature's direction. This will happen if the layer doesn't have Editing toggled on.

I have wrapped it up in a plugin called Swap Line Direction and it's available in the QGIS plugin installer.

This plugin is no longer available (as of 11/16/2015) in the plugin installer but you can build your own pretty easily with the "Plugin Builder" plugin.

I'll have a look at how easy it is to intergrate with fTools.

If you have the GRASS plugin use the v.flip option - http://grass.osgeo.org/wiki/GRASS_AddOns#v.flip 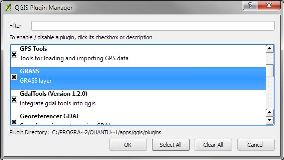 Following Nathan's answer, you can create a python action in the layer where you want to swap lines:

You will be able to swap lines by one click on them. It is much user-friendly!

This plugin reverses the line direction too:

You have to select a feature, and turn the layer into edit mode before clicking on the plugin icon.

This plugin will switch the direction of a polyline.

Based on Nathan's post I've created a processing script to reverse the direction of features:

Following @Nathan W 's answer above, here's a solution if your line is a LineStringZ (i.e. a line with an x, y and Z value) - as are most Google Earth KML files (even if that Z value = 0, which is often the case.)

You might get this error when the nodes.reverse call is made in the code below:

The solution to that is to use QgsGeometry.fromPolylineXY() instead in line 6:

15
How to avoid creating corrupt Shapefiles during Editing?
3
How can I turn islands into individual features in QGIS?
0
What can I do with this unzipped GDB file in QGIS?
4
Making curved labels for polygons in QGIS?
1
How to NOT show decimal values in TileMill when using gdal_contour generated contours?
5
QGIS Count lines in polygon ( to be part of a graphical model )
3
How can I switch line direction from the Linux commandline?
1
Adding large numbers of labels using QGIS
2
How to fix QGIS being extremely slow?