Ask Question
Asked 8 years, 8 months ago
Active 4 months ago
Viewed 1k times
11
This question's answers are a community effort. Edit existing answers to improve this post. It is not currently accepting new answers or interactions.

I am looking at collecting spatial information from a range of stakeholders to identify opportunities within a landscape. However, the data that we are collecting are not presently mapped and so we wish to use an interactive method to get this information onto a map.

Which online websites/methods would people recommend for circulating to a non-technical audience to try and get them to map what they know?

Where the emphasis is on ease of use by the stakeholder.

There are quite a number of tools and platforms on the market right now. In fact, it is often suprising to see new projects and apps being built from scratch, when it is so cheap and easy to do with other tools.

If you are looking to quickly and easily launch a custom crowdsourced mapping project from your browser, try canvis.app.

Canvis is not as powerful as other tools, but it is fully customizable and supports most use-cases. It works for both large-scale, and small scale projects, but currently lacks polygon and polyline editing and photo uploads. It allows data export to CSV and works on all web browsers and screen sizes.

One of the oldest platforms is Ushahidi. Ushahidi is especially focused on 'crowd reporting' via SMS and other channels. 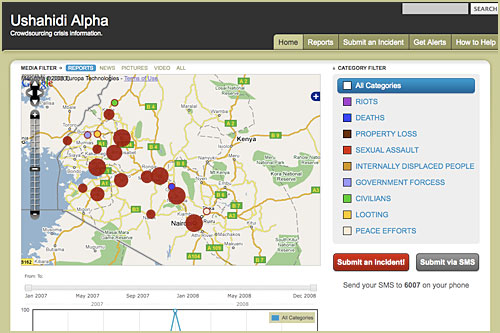 We built the Ushahidi platform as a tool to easily crowdsource information using multiple channels, including SMS, email, Twitter and the web.

People can submit reports by:

It was originally intended as a tool for monitoring election related violence and suspicious activities. It has since been used in Haiti and other disasters. You should be able to adapt it to your purposes. Ushahidi only deals with point data though. If you need to deal with lines and polygons, you're out of luck.

Another option would be Localwiki.

It's a tool for collaborating in local, geographic communities. It has integrated support for mapping. Your users can delineate an area or trace a line on the map and then write what they know about it on a wiki page.

Every feature of a local wiki involves a place: where news events happen, where sites are found, where neighborhood boundaries are, and how to get from point A to point B.

I think it would be useful to consider what might motivate the masses to participate.

I've worked on crowdsourcing for a 911 emergency notification system. People fear not being notified in the event of a nearby emergency. I've never played it but I think greed might be the underlying motivation for participation in FourSquare.

Other ideas, depending on your project: - http://wikimapia.org/ defines places in the simplest form (a box) and allows users to add information about the place. It has very widespread adoption (>1 million users) and is used by a non technical audience. - Wiki's. A lot of information in Wikipedia is linked to a particular geography through category's and special tags. It doesn't need to be a map to be spatial. - It is also possible via geoparsing to make a body of text spatial. Ask your users to provide information as text and then extract the spatial information. - Pen and Paper. Give stakeholders a map to print and ask them to mark up with a pen. Ask them to email a scan, or give a postal address.

Not the answer you're looking for? Browse other questions tagged software-recommendations online crowdsourcing data-capture or ask your own question.