My goal is to calculate the sum of the point data within the census blocks to eventually create a choropleth map and to run regression models with the sums of the points as a dependent variable; however, some of the points are directly between blocks and are not truly within them, so the points in polygons tool seems to miss a lot of points.

Because I am interested in the effect of these points on the proximal blocks, I had the idea of creating a 15m buffer around the points, and summing up the number of buffers that each census block intersected, but I am at a loss for how to do this in QGIS. So far, I have tried to join attributes by location, intersections, unions, and they all don't seem to get me where I need to be.

I attached a sample picture of my layout with the intersecting census blocks selected. 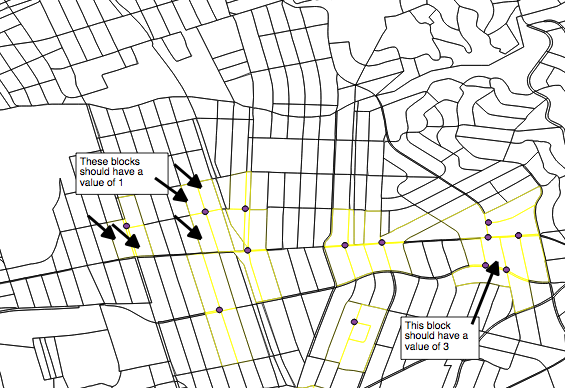 I figured it out.

Not the answer you're looking for? Browse other questions tagged qgis buffer intersection spatial-join or ask your own question.

3
How to Buffer with intersections in QGIS
2
How to find most common classification within buffers?
3
How to generalize polygon attributes in a regular polygon grid?
1
Sum a field in buffer intersection
3
Assigning values of points outside a buffer to points within a buffer
1
Point Distances to many buffer zones
2
Get Intersections of polygons in same layer in R (or Qgis)
1
How to find reasonable locations (location study)?
1
Setting shapefile points size to actual acerage using QGIS?
0
Spatial joining/merging two spatial points data frames in R via buffer?