Can anyone tell me when to check/uncheck Trim Polygon option in Service Area Layer Properties dialog box while doing Network Analyst problems? By default Trim Polygon values comes as 100 m. Shall we need to change it according to our problem?

The purpose of that box is to control how far generated polygons will extend beyond the outside edges of the network.

Consider a dense grid of streets as in a city. Service areas for facilities near the edge of the network may extend well beyond the range of your network with high enough break values. You are not concerned with areas beyond 'city limits', so you would check this box so that even if a polygon went hundreds of meters into the city, it would only extend a hundred (or whatever value you set) out of the city.

Consider a more rural network of roads that is sparse, such as a mountainous region, with many dead-ends or dangles (sort of like a plate of spaghetti). In this case your service areas will look very much like buffers of your road lines, and the value you input after checking the box will determine how far away from that edge (either side) the polygon will extend.

Two things to keep in mind:

Because this is largely a graphical preference setting, and it is relatively easy to change, I would encourage you to experiment with it assuming the network solve itself doesn't take an extensive amount of time. All you have to do is solve your analysis with one setting, then go in and enable/disable or change the distance value and then resolve the network. If you make the value change large enough, you can quickly see the impacts it has. 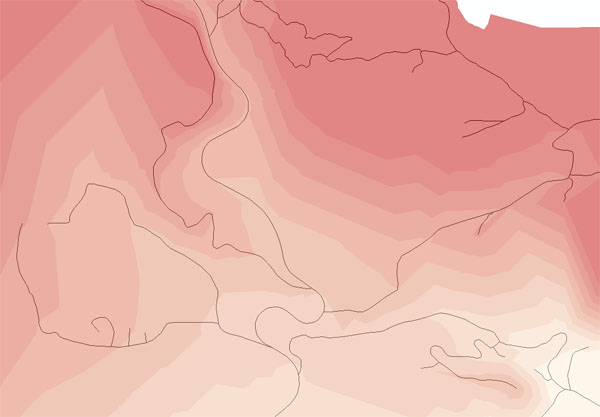 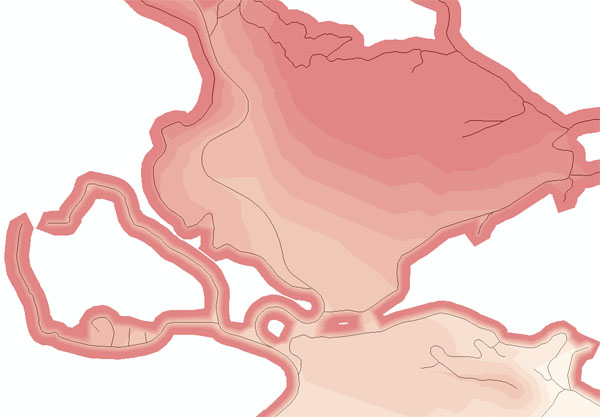 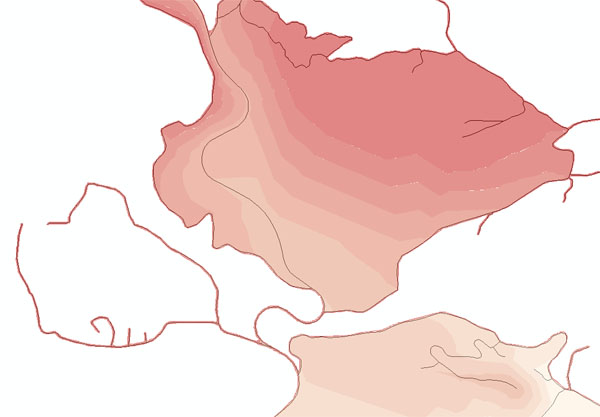 Note: break values in the above images are based on drive time in minutes, and there are no areas on the network pictured that are not reachable within the maximum break value. However, because the trim distance is less than the max break value, as stated in point 2 it becomes increasingly difficult to actually see what polygon the network dangles in the lower left acutally fall in as the trim distance decreases. The images also show the issue with network interior regions - for my final map, I used lines instead of polygons for a more accurate representation.