How to fix shapefile projections

I have a project with several shapefiles. The files overlapping however. I have to go to unusable extents to even see the file on the same screen. I have tried using to project to as suggested here to now avail.

I have created a public github repo here with the project 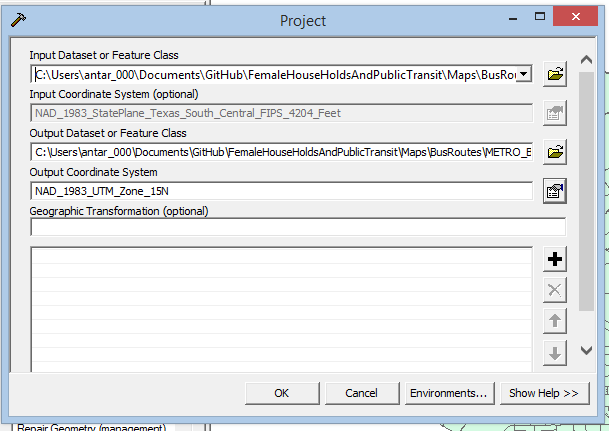 The problem is not with the bus routes data, it's with your other shape files. They appear to be TIGER data, which is not distributed in a Projected coordinate system. At some point, the prj files for those three shapes has been corrupted, altered, or deleted. Perhaps you used the Define Projection tool on those shapes and set them to UTM 15N when you should have used Project instead, as with your previous question?

At this point you need to either redownload the TIGER data (safest) or add those three shapefiles and use the Define Projection tool to set them to GCS_North_American_1983 (WKID: 4269 Authority: EPSG). Note, that's Geographic and not Projected - be sure you are in the right top-level folder when browsing for the coordinate system and it would be best to do so rather than attempt to load anything from another file (as they may be incorrectly set).

Once you have fixed the projection, all of your layers should load in to the correct place with no other effort on your part due to on-the-fly reprojection. From there, if you wish to change the coordinate system for all of your data sets you can then use the Project tool as explained in your previous question. For the datasets you have there, no Transformations should be required - they're all on the same datum.

HOWEVER, I do notice you have a layer file in there for a world streets basemap. You need to be aware those basemaps are distributed in Web Mercator, and a bug in some versions of ArcGIS (don't know if it goes back to 9.3 or not, but it's definitely there in 10.1) will alter your dataframe to that projection just by adding the basemap. You then have to reset it to whatever projection you wanted your dataframe in if so.

I would do the following:

If it does not, then either the data you downloaded has a coordinate system problem, which I suspect is unlikely. Or, as you suggested in a comment somewhere earlier, your other data may have a coordinate system problem. I think the latter is more likely and that you should look for some spatial data that you are confident is in the correct coordinate system and location to use as the foundation on which to try and display the others. I usually use something like the OpenStreetMap basemap from ArcGIS Online to do this but that has a different datum which may confuse things further. Consequently, I think you should look for something known with certainty to be correctly located in NAD_1983_UTM_Zone_15N.

Not the answer you're looking for? Browse other questions tagged arcgis-desktop shapefile coordinate-system arcgis-9.3 or ask your own question.

3
Why is shapefile not drawing in expected location after (or before) using Define Projection tool?