How to interpolate population data?

I have population data (inhabitants per city and year) of 31 cities of the DR Congo for the years 1960, 1970, 1980 and 1990. I want to interpolate the population of all cities for the year 1990, to estimate the growth of them in order to locate the sites that will minimize the competition for resources.

I have used an IDW and a layer of existing lakes as a barrier. However, it seems to me that the resulting layer does not have sense, and so I would like to ask if IDW is the best interpolation tool for my data or it will be better to use other, such as Kriging.

I have to create a protected area in the DR Congo, so I want to estimate the possible growth of the cities in order to find the more suitable place to avoid competition for space and resources. 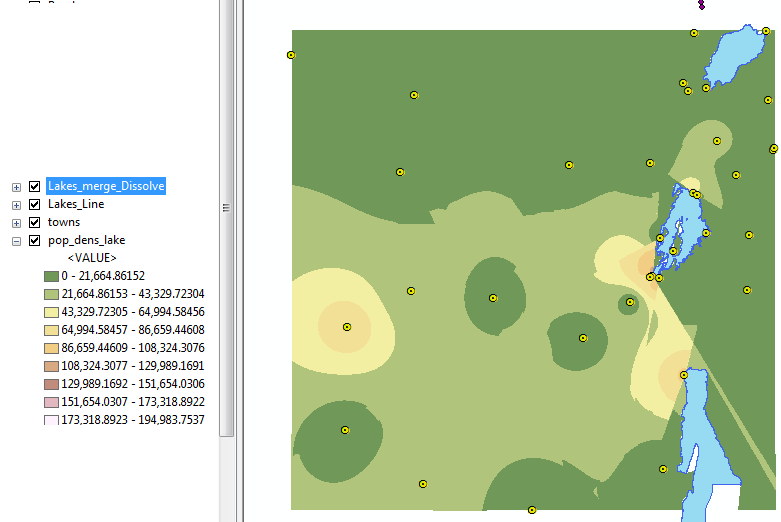 The short answer is: no, but it might be the best you can do without additional layers. The problem is that humans do not settle evenly. If all you have is populations of cities then IDW might be your best approximation, because population density does decay the further you go from the center of a city (as IDW models). However, population does not decay evenly in all directions. Settlements will stick very close to major transportation routes. So if you were able to get a transportation layer from 1990 for your study area then you could limit your IDW output to a buffer around the roads.

In my opinion, you will need other layers to draw any meaningful conclusions from the IDW.

In your case (pressure on the resources), I recommend that you use some neighbourhood analysis instead of interpolation. for instance, you can estimate the distance travelled in one day by the people of the city (a simple buffer to start with, or more advanced cost-distance analysis). Then you sum the population that can reach each location. If you use the same distance, a quick method would consist in using focal statistics. If you want a better model, you need to loop on every city, perform cost distance, reclassify, compute the zonal statistics and sum each part.

Not the answer you're looking for? Browse other questions tagged arcgis-desktop interpolation population inverse-distance-weighted or ask your own question.