ArcObjects VB.Net - Looping through Layers from TOC and ListBox

I'm creating a tool in ArcMap 10 using a Windows form... its been a struggle (maybe some of you recognize the same themes in my questions) because this is the first time I've really messed with ArcObjects and VB.Net... either way I'm almost there!! (Largely thanks to a very helpful GIS community.)

The main chunk of the code works (grabs an attribute from one layer and assigns it to the "target" layers), and now I'm in the process of linking up the user parameters. 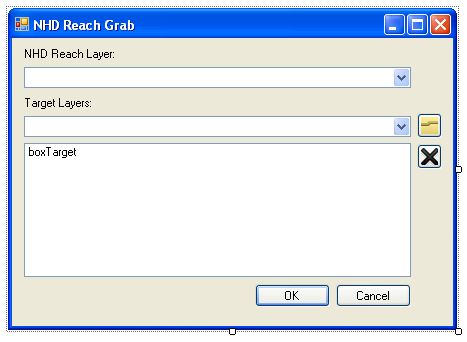 As it stands, the "NHD Reach Layer" combo box (cmbNHD) requires the source layer be in the table of contents (TOC).

The target layers, on the other hand, can either be in the TOC (through the "Target Layers" combo box (cmbTarget), or accessible through the GxDialog. Either way, the selections are placed in the list box (boxTarget).

OK, so what I can't figure out, is how to form some "loopable" list from the items in the list box. The original code worked only with the items in the table of contents, and so it could loop through them all using this type of loop...

...and just skipping the index number of the source layer ("NHD Reach Layer").

AND SO, I'm pretty sure I just need to create an enumeration of the layers in the list box, but I've only been able to dig up the IEnumLayers interface, and it seems as if that only works with the layers in the current map.

Also, I'm not sure if this is the place (though, I can't think of a better one), but when this is all finished, I was wondering if I could post the final code (the reason I ask is because it wouldn't really be a question). I've spent a good amount of energy trolling through forums and developer help files to find relatively simple answers in the form of examples, but usually they are snippets, which, when viewed out of context, can be confusing.

It's my belief that this code would be really helpful to anybody just getting started, because it offers few frills, and combines a lot of basic methods with some intermediates thrown in here and there.

Have you considered handling this through an array?

You could load the array and store the layer name and workspace path in the array. You could then iterate through the array as needed. When you add and remove items to and from the array, reload the list box to populate it with the array items. (there are different ways of doing this depending on the type control and array) In ArcObjects there is also an iArray that stores a reference to the layer itself (or other objects) rather then a plain array. Looping through arrays is very fast so even if you need to repopulate your control with items every time an item is added to or removed from an array is very fast.

Not the answer you're looking for? Browse other questions tagged arcgis-10.0 arcobjects vb.net or ask your own question.