This might be a very simple question - but it is quite vital and I want to make sure I am thinking this through right.

I have used the cut/fill tool to calculate the difference in volume of a volcano cone. I have an attribute table, is it just a case of adding up all the -ve values to find the overall volume? (negative because the volcano has inflated i.e. I should be gaining volume). 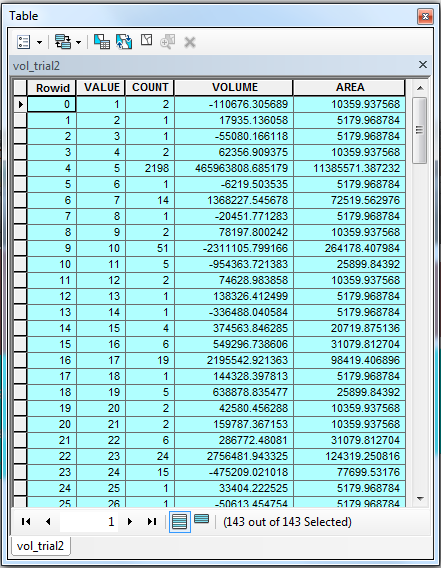 Provided your Z units are the same as your X and Y units:

You have it almost right. Adding the negative values would give you the total volume of the increase. HOWEVER, this would only be your answer if there were no POSITIVE values in the resulting attribute table. (If your resulting rendered shows any red and no blue areas) What this means is that although the volume of the surface has increased in some areas, it has also decreased in other areas. You must consider both numbers to calculate total gain.

The tool finds differences between 2 surfaces. Add up all positive records to get a total volume decrease between the 2 surfaces (or cut - volume removed). (The results renderer will display cut areas as blue)

Add up all the negative records to get a volume increase between the 2 surfaces (or fill - volume added). (The results renderer will display unchanged areas as red) The number is negative = merely an indicator that this number represents fill.

If your surfaces are similar and most of the area has not changed, you will have a volume of 0 and a large cell count for those areas. (The results renderer will display unchanged areas as grey)

Provided you are using metric system and your units are metres, the volume is in m³.

The negative value of fill is merely an indicator of the volume being a fill so that the renderer can display it correctly:

Turn the negative FILL total to positive and subtract:

Positive result will mean there was an overall volume increase between the 2 surfaces and the final number will show by how much it increased (total fill - in m³ if you are using metric and metres as units).

Negative result will mean there was an overall volume decrease between the 2 surfaces and the final number will show by how much it decreased (total cut - in m³ if you are using metric and metres as units). 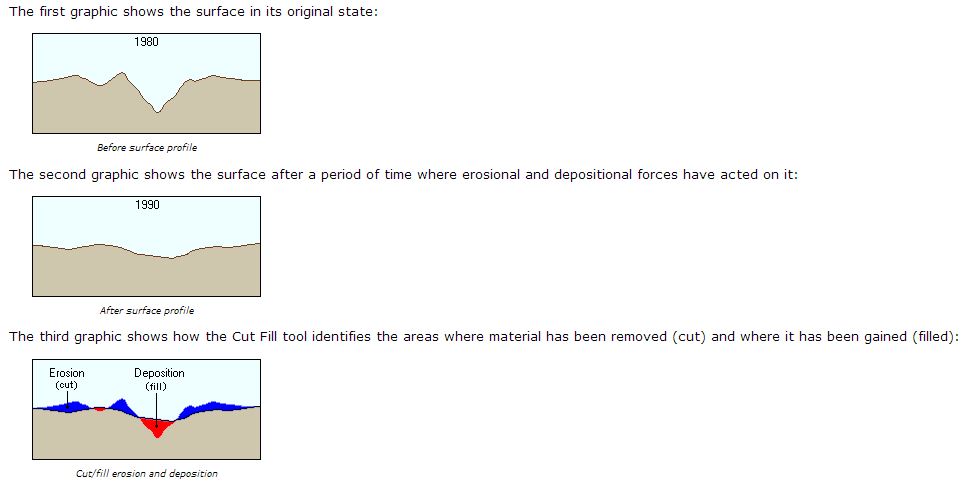 There seems to be a confusion as to what the ESRI example shows. To clarify, let's look at it in 3D and give it actual values:

Each cell in the entire Before_Ras has an elevation 30m: 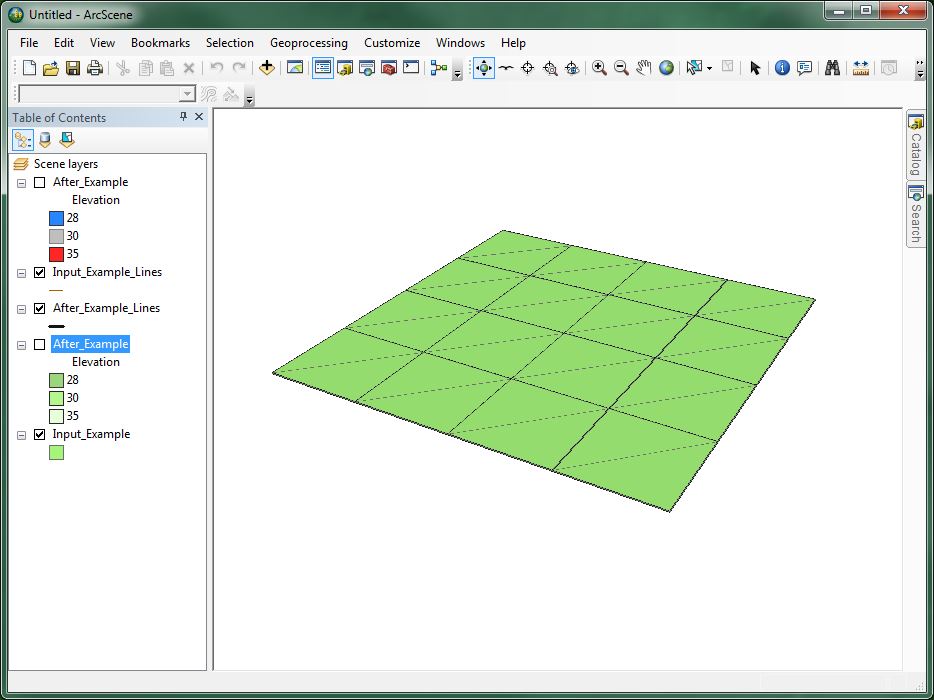 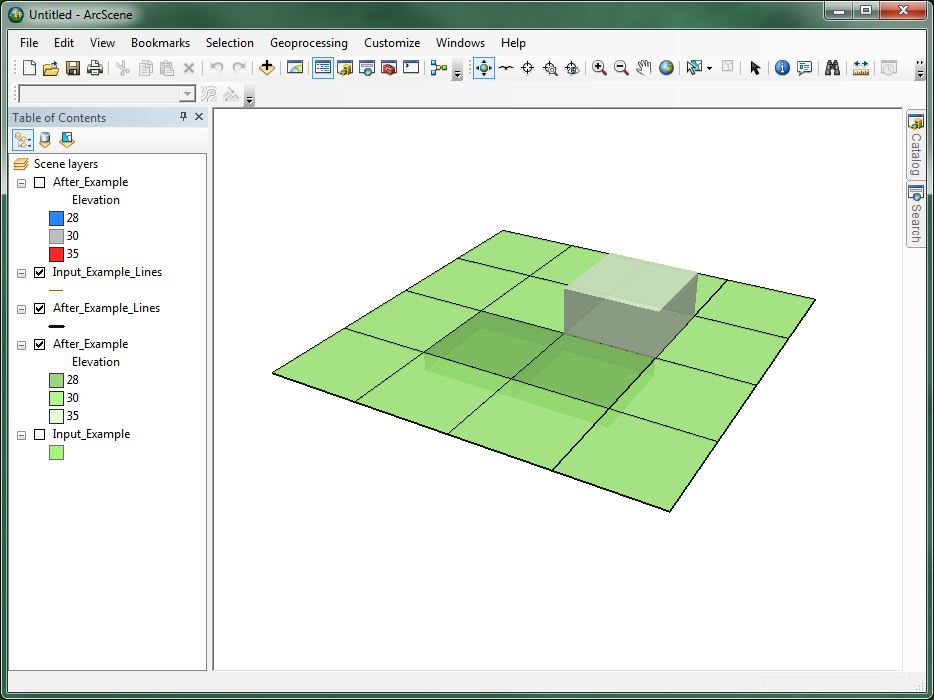 The resulting difference WRT volume increase or decrease between the 2 surfaces is therefore: FILL - CUT = 100m³ (an increase of 100m³): 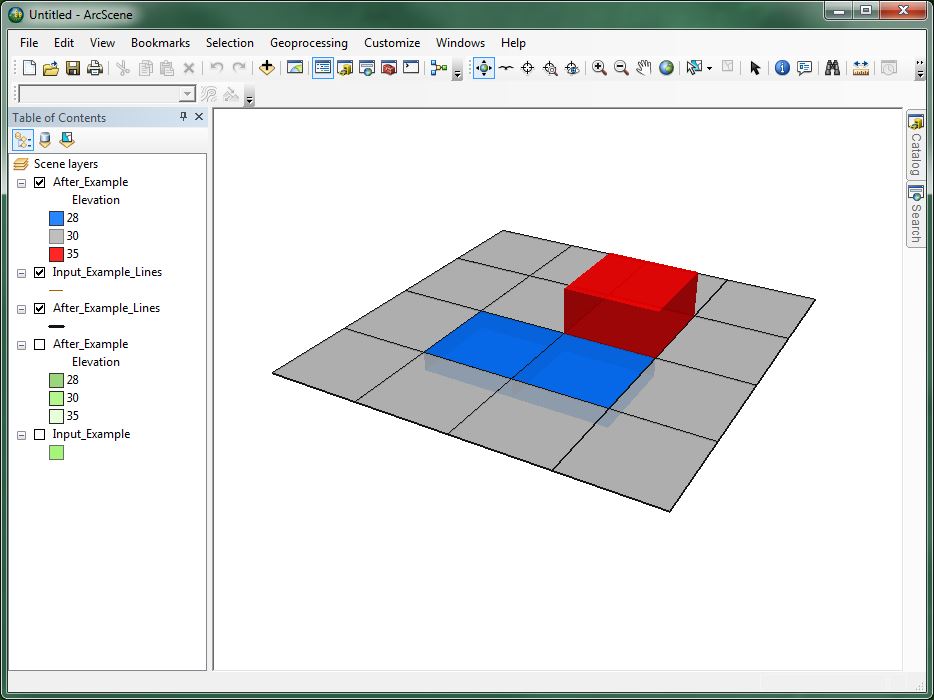 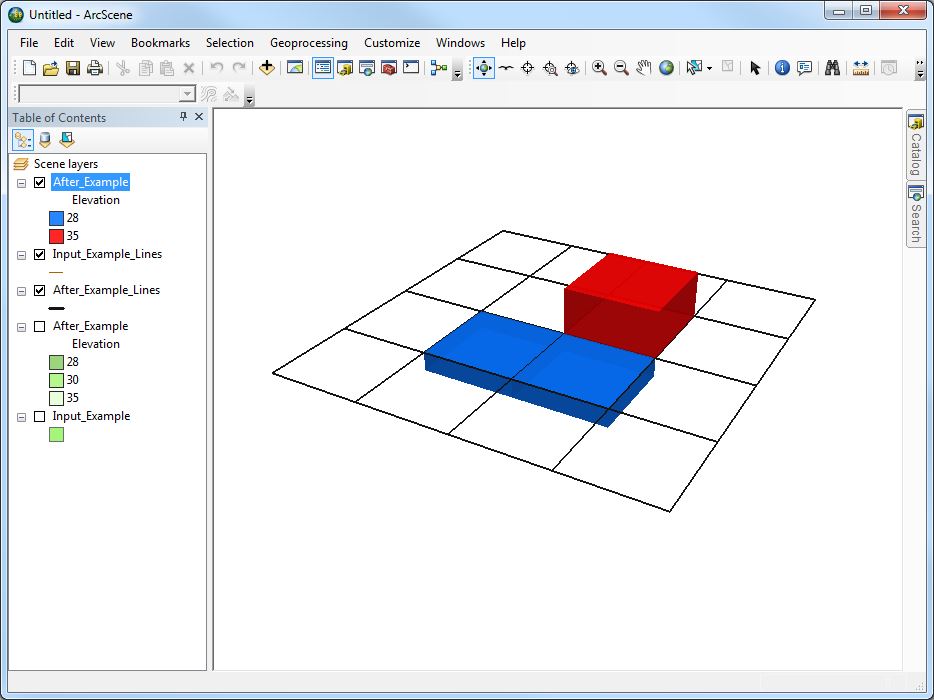 The 13 other cells whose combined area is 1300m² remain unchanged as you can see in the resulting attribute table in this example: 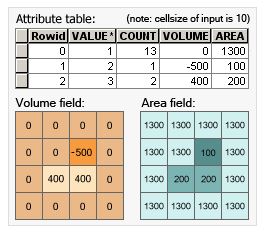 On the ESRI example page for the cut/fill tool for ArcGIS 10.0 it appears that you need to multiply each volume column by its count and then add that to the other records after performing the same operation on them to get the actual amount of change. Each record contains all of the results cells that had the same volume change. Looking at their attribute table you would get a volumetric change of -300.

To accomplish this you will:

If looking at volumetric change is something that you do a lot of, I would encourage you to look into the Geomorphic Change Detection (GCD) Software. Depending on what version of Arc you use it has a plug-in version and an Add-In version. The issue of estimating volumetric change is made much more complicated by the making sure rasters are orthogonal and concurrent as well as accounting for uncertainty in the raster values. GCD puts all of these tools in one place for you, is very well documented, and provides different methods to report your results.

If you want to calculate the sum of cut and the sum of fill do the following:

Do the same for CUT values if needed.

Not the answer you're looking for? Browse other questions tagged arcgis-desktop arcgis-10.0 volume or ask your own question.

0
Clipping TIN layers to pit shells
0
Determining area amount of soil that needs to be excavated to level an area?