Origin of the OSGB36 datum origin

Interpreting 'GIS' in the geographical information science sense, I have a historical question about the 1936 OSGB datum following the 1936-62 retriangulation of Great Britain - hopefully not too off-topic..

Does anyone know of the reason for the 49°N 2°W "true origin" of the datum? Ordnance Survey website's closest comment on this appears to be:

So the "false origin" at 0 Easting 0 Northing (approx 7.56°W 49.77°N) is chosen so the Scilly Isles and western point of Northern Ireland would remain in positive coordinates - an admirably egalitarian nationalist justification. But 2°W seems a very England-centric longitude, approximately bisecting the 1.7°E and 5.75°W extremes of the nation. And the only redeeming feature of 49°N seems to be that the 49°N 2°W "true origin" is marginally closer to a UK dependency (Jersey) than the French mainland. So why this parallel/meridian intersection?

For the meridian, the answer is simple: It lies almost in the middle of England, this meridian will be parallel to the local transverse mercator grid, while the others have minimal bendings. This is how the OSGB grid looks on a lat/lon map: 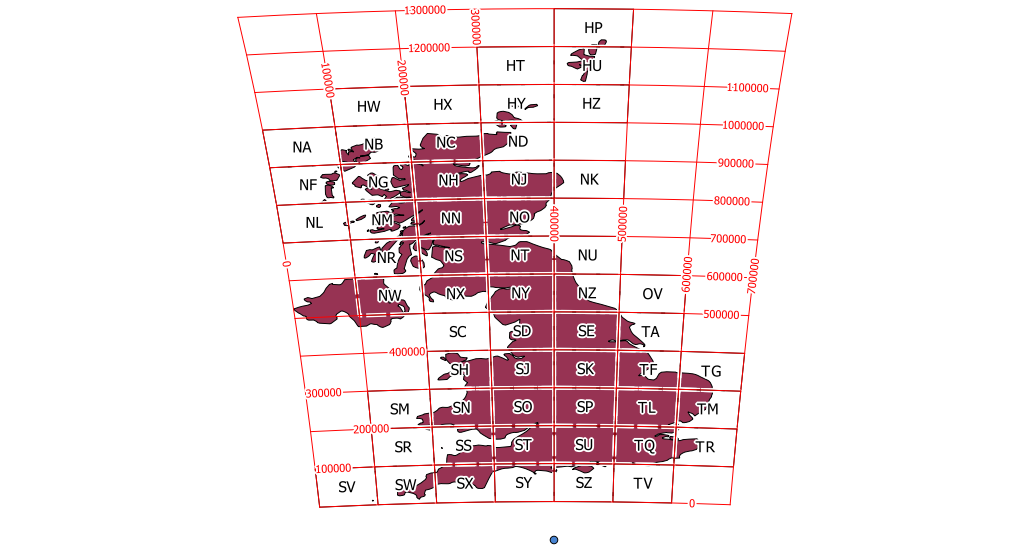 For the parallel, it does not make a difference for the projection which one you take for as center. German tmerc Gauss-Krueger projections use the aequator.

Maybe they intended to use Jersey as origin, but then decided to cut of the first 100km.

The 100km grid is actually a subsystem of a 500km grid which is indicated by the first grid letter, as explained here: Eastings/Northings OSGB36 Grid origin

Not the answer you're looking for? Browse other questions tagged datum ordnance-survey united-kingdom history or ask your own question.

6
Determine the UTM zone/hemisphere in a particular datum
2
Eastings/Northings OSGB36 Grid origin
1
Downloading the distribute_setup.py
11
why does the North American Datum not actually include north america in it's boundary?
0
Create custom coordinate system