I'm am looking for a way to serve tiles while offline. I'm using Windows 7. Here's what I've done so far:

Then, after all of that is done, I run:

After I run that command, I see:

So, I open up my web browser and go to:

which is then routed to:

I see nothing on this page, but the server in the terminal is spitting out this: 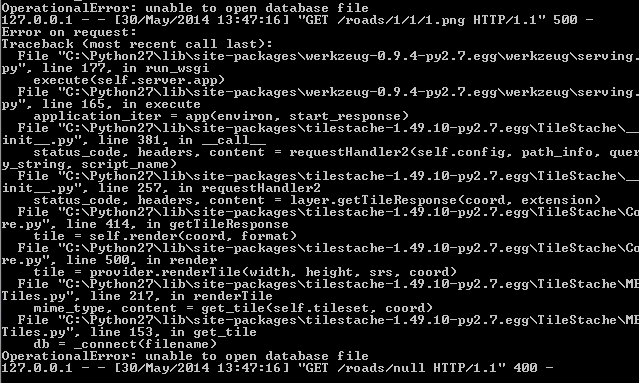 Also, I've tried all the steps above using world map converted to .mbtiles using zoom level 0-8 and then manually changing the URL of the tilestache server page to be:

But, I still get the same errors and nothing shows up. What should I try to fix this?

As it turns out, TileStache ends up taking the file name from the configuration file and prepending it with a "/". So, for Windows, this means that you have to place your .mbtiles file at the root of your drive if you want the server to be able to find it.

Or, if you're feeling "hacky", you can go into the MBTiles.py file and hardcode a "." in front of the filename variable that was giving the database connection error (line 153). This makes the path look like ./ instead of /. Of course, this means your code breaks if you need to update to a newer version of TileStache, thus making this a "hacky" solution.

Not the answer you're looking for? Browse other questions tagged tilemill tilestache mbtiles or ask your own question.