NAC is a geocode system for identifying an object anywhere on the Earth.

Does any one knows how can I choose a single unique NAC for a building?

Or what software I can use to assign NAC addresses to buildings?

I have read somewhere that you can assign the NAC of the centroid of a building as a NAC of that building. But I do not know how much this is true.

(You can see a house here with different NAC addresses) 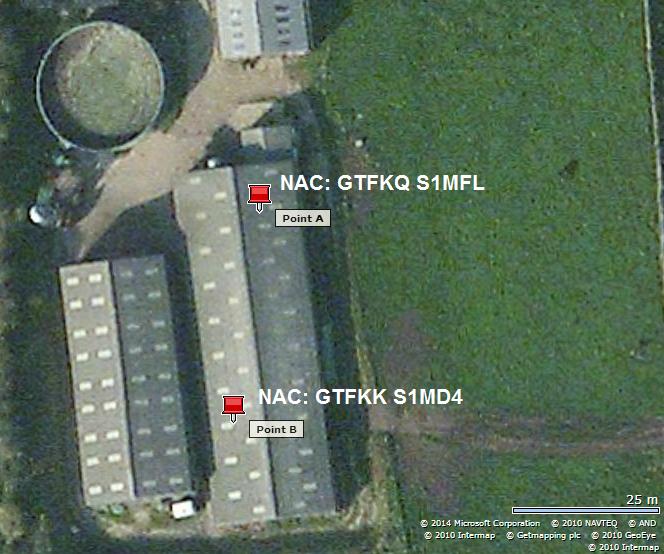 You appear to be asking two very different questions.

First there is the issue of 'assign it where', as in what software or data are you working with? Is it a building layer that has no NAC attribute and you want to add? Is it a building layer that has two labels already and you want one? Are you creating it from scratch? Is it point labels on a map? What are you doing with this information? Without significantly more information we cannot make any software recommendations or answers.

It's possible there are geocoding locator services that can assign NAC addresses but I don't know, nor do I know what softwares they would be compatible with. A quick Google search on 'NAC locator' found this page. I also note an External Link at the bottom of the Wiki article leads to this page, which lists mapping services, software, and data for working with NAC.

So if your building is larger than the smaller cell, perhaps you would want to use an 8 instead of 10 character address. This part of your question is the equivalent of 'how many decimal places in a lat/lon coordinate should I use?' The NAC system of using cell addresses means that sometimes a feature will fall in more than one cell (or not completely cover a cell), and you must decide the rules on how to resolve that.

This is fundamentally similar to the issue in a raster representation of data - if a feature falls only partially in a cell, how do you define the value for that cell? You have to make a rule. For example the feature is really important, so whatever it touches is going to be that value; alternatively if it covers half the cell count it as the feature, otherwise don't. Both approaches are valid, you just need to create a justifiable rule and apply it consistently.

Not the answer you're looking for? Browse other questions tagged coordinate-system software-recommendations address position nac or ask your own question.