I currently have an oracle table of approximately 100,000 records - all of which are polygons. I want to find all the polygons which do not touch any other polygon within the same table.

There are a few previous posts which use the ST_TOUCHES query but this relies on you having two geometries to compare against from different tables. Unless my understanding is incorrect? Where as what I want is a query which looks at the one table and one Geometry column and looks to see if a polygon touches another.

I whipped up a table of 89280 triangles, 78 of which where randomly coded for isolation. Then I deleted the neighbors of these triangles with the command: 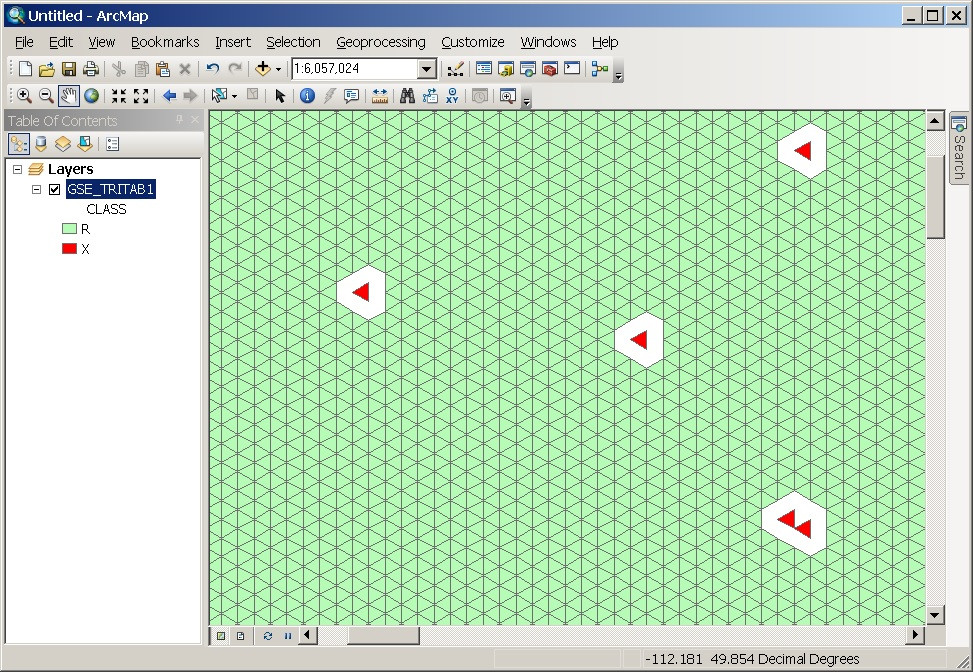 returned 76 rows (because two of the randomly selected polygons were touching) in 4.06 minutes.

Just for grins I also ran:

Both the DELETE and the queries used the technique known as a "self join" to compare a column in the table to itself (one in a subselect, and one in an EXISTS clause).

It's important to note that the position of the referenced columns in the spatial columns is important -- The table with the index (the "many" side of the "find many which have a relationship with one") must be in the first position of the Spatial function for optimal performance (and sometimes to prevent an ORA-13226 error). If I left out the SDO_FILTER constraint with the RELATE test, performance was significantly worse.

You're missing a self join, here's another question about it.

This link shows how to create these as ST_GEOMETRY Data to match your question.

To find which regions are disjoint

Now to modify it for ones that do not interact:

Not the answer you're looking for? Browse other questions tagged sql oracle-spatial or ask your own question.

4
Determining percentage of intersection between two shapes In Oracle Spatial
16
Identifying topological relationships using PostGIS
4
How to perform SQL query using .STContains in MS SQL Server
1
PostGIS update statement returns wrong information
2
Efficient way to find geometries that intersect a given rectangle
1
Error concatenating lines in Oracle Spatial
1
Get all rows that have geometries which intersect with a geometry in any row of a different table in an effective way
10
Rule-based symbology based on current selection in QGIS