How do I find major locations within postal codes from GeoNames?

I'm trying to narrow down my postal code table and limit the number or rows to 1 per postal code. I've not had a problem with Canada and the USA. However with Great Britain the data from GeoNames has several location names per posta code in some areas.

For instance, ZE2 in Scotland has 162 locations within it, most have the same lat & lon. Apparently it's one of the postal codes for the Shetland Isles.

I'm not building a geolocation map of great detail. This is for a hobby site to help people find others within a reasonable distance.

http://www.doogal.co.uk/UKPostcodes.php?Search=ZE2 Lots of points with the same postcode sector. 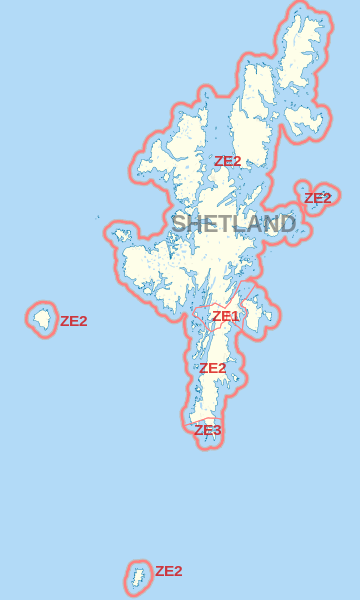 ZE2 is a multi-part polygon with a hole (donut) So the Centroid is going to be offsetted by the western islands.

How would you define and determine major? How did you solve the problem with US zips? There are plenty of single zip codes that cover multiple towns or large rural areas.

On GeoNames you can filter down to just the P or PPL tags to get populated locations (44 in this case instead of 162 total locations), but then you'll have to come up with a criteria to select one (population?) and a way to query that. Or you could just call ZE1 Lerwick and ZE2 Shetland Isles, using the region name rather than a specific locale. For that matter you could just use Shetland Isles for all ZE entries.

You may want to refer to the Wikipedia entry on UK post code areas, and the Subdivision links there to post towns and postcode districts.

Not the answer you're looking for? Browse other questions tagged mysql postal-code or ask your own question.