Get row counts of all tables in file geodatabase, ideally from metadata

I need some help with finding a way to list all the row counts for many tables (feature classes as well as non-spatial ones) in a file geodatabase. At the moment it's done manually by viewing the description tab in ArcCatalog and copying and pasting but I think there should be a way to bring out that information using arcpy. (EDIT, see further below: there is possibly also a way to do it via OGR in QGIS).

The file geodatabase structure is as follows:

I have gotten as far as doing this with a bit of help from here:

It's just getting the row counts from the metadata that I'm having problems with, my arcpy API knowledge is a bit inadequate for that. The above code works but it's really slow, and I was wondering how I can pull these row counts directly from the metadata since it's displayed there already in the ArcCatalog. 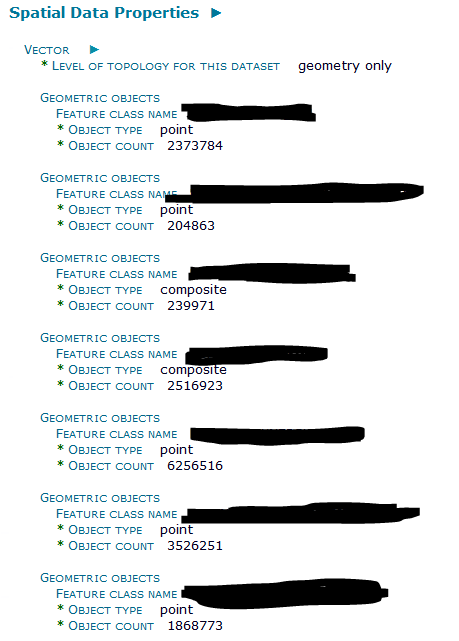 Trying to go with the way of ogr in qgis now. Referencing this.

Still need to work out the code to do so.

Finally got the code working, referencing the OGR API.

Over 4 geodatabases with about 70 feature classes and a total of >170,000,000 rows, the arcpy script I posted in the question takes probably half an hour to run, whereas this 10-line script using ogr (ran in qgis) takes 20 seconds. So yes, I'm happy with this open source solution, though definitely interested in a pure arcpy/xml based method.