I have an Excel file (with .xlsx extension) containing some non-spatial data that I want to use in combination with some other spatial data.

I generally know how to load an external source (Loading Layers from the PyQGIS Cookbook), but I haven't found any reference for files with .xlsx extension, so I tried to import it in this way:

but when I try to read something, for example all the elements from the first column:

I get this error:

What I'm doing wrong? If I previously convert my file to the .csv format, then there is not problem with the reading of the items in PyQGIS, but I would like to know if there is a direct way in order to avoid this passage.

Following your example what you want to do is to iterate over all FEATURES of the layer, not over the layer object itself. That's why your Code fails.

Given this very simple Excel sheet: 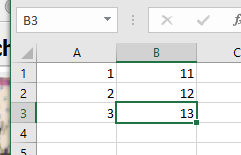 Make a layer from the xlsx file as you already did:

To learn how the columns can be referenced by Name type:

Now, when you want to iterate over all features in this layer, that are all rows of the underlying Excel sheet, use getFeatures():

Instead field names you may reference fields by their index. In my example feat[0] gives the same result as feat['Field1'].

You might need an extra Python package for reading Excel spreadsheets. I've used xlrd in the past: http://www.python-excel.org/ but there might be better others now.

I don't think what you tried -- reading an Excel file as a QgsVectorLayer -- can work - and you should check layer.isValid() before doing anything with it anyway. You'll need to use the xlrd package to read into normal python structures.

You might also get some joy with the XYtools plugin: http://plugins.qgis.org/plugins/xytools/ which wraps the xlrd python package.

Just some sample code for you to read the data. You'll have to 'pip install xlrd' first. See https://pypi.python.org/pypi/xlrd.

Not the answer you're looking for? Browse other questions tagged pyqgis import excel or ask your own question.