I am using the Zonal Statistics tool of QGIS 2.18.9 to calculate the mean value of a raster within a grid of rectangles. When I do it "manually", everything works. But as I have to do this for a lot of grids and raster files (more than 100), I want to automate this. I tried by different ways :

1)Using Graphical Modeler It failed because you can't specify what you want to get (min, max,mean ...) so it creates all the column with only zeros inside.

2)I tried with a python script. So I wrote a script and I run it in the Python console of QGIS. I tried to different ways :

2) a) I read this article : http://spatialgalaxy.net/2012/01/27/qgis-running-scripts-in-the-python-console/ And I succeeded in running his script. I modified it to get what I want : 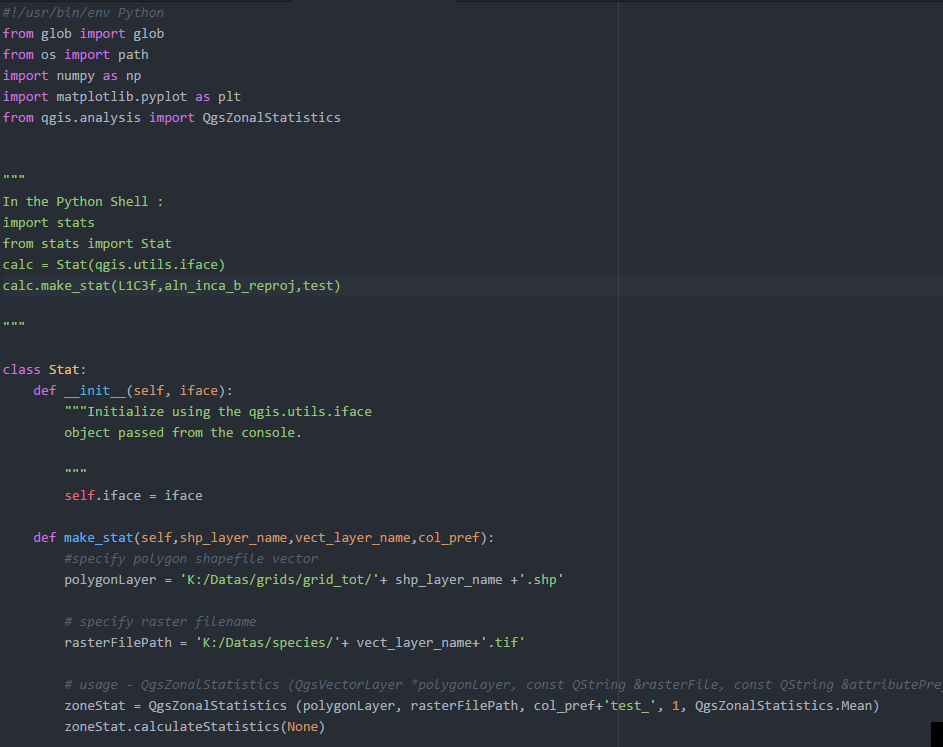 But python returns me : "NameError: global name 'QgsVectorLayer' is not defined"

So as the man in the article tells about a "simple" way. I tried it too.

2)b) Still using python, this time I am not creating class. I just write it directly. As for 2)a) I tried a simple code that I found there : How to use QGIS Zonal Stats Plugin from Python Console? It works. So I changed it to obtain what I want :

it gave me nothing, but when I write "zoneStat.calculateStatistics(None) " in the Python Console it returns 3 and change nothing in my Vector Layer. Same thing when I want to run it line by line without python script : when I write in the command it returns me 3 also.

So, to put it in a nutshell : I try to run a python script to automate the QGSZonalStatistics method. With classes it does not recognize QgsVectorLayer (so perhaps I forgot to import something) With a simple dirty script or only by writing in the command, it returns 3 without further information. I read on a forum that it should return 0 if it created the columns.

Soo I just found the solution for the 2)a) if someone once needs it, I added those lines :

Then it ran but nothing changed. After re-opening Python the column was created !!!

And one last thing : Be careful to Reload AND import again your script for each change (pretty heavy)

5
Running a Python script to extract raster data in QGIS
7
Is there a zonal statistics tool to calculate median and mode raster values for each polygon?
1
Writing result of PyQGIS to shapefile
3
Script that runs automatically from the QGIS Python Console when QGIS starts, using schedule tasks on Windows 10
4
Compute zonal statistics in QGIS with overlapping features
5
NameError when running script QGIS Python 3
1
Integrate Python script with QGIS plugin