Identifying missing pixels/ pixels with no data value in .tifs

I am looking for a way to identify missing pixels in .tifs. For example, in the attached image there is a row and a column of missing pixels across the image.

The no data/ missing pixels after some investigation appear to have the value of 0 and appear across all three bands.

Can anyone recommend a way, via a piece of software/script, that could do this in bulk, say for 400-500 .tifs at a time, rather than having to do it manually/visually for each .tif?

Ideally, I'd like something that could give me a printed output in a .txt which lists all the .tifs that have missing pixels, which I could then investigate visually.

The software I have access to is; FME, ArcMap, QGIS, Python, and excel, however I may be able to get hold of something not on that list.

I have attempted a solution using Python with numpy and gdal (shown below), however I am new to python so my script is probably trash. I've played around with using numpy array and GDAL band statistics and I've got the expected results (both methods identify 0 values when expected), however I'm struggling to find a way to loop through a folder of 400/500 images and have some sort of summary statistics for all the images rather than 400/500 individual results.

I don't have a lot of aerial imagery to test this on just now, so I'm not 100% sure it'll work in your case. But it should get you closer to what you want.

I've used the rasterio library, which provides a very nice wrapper around GDAL and makes the code much simpler to write (and read).

As with most python experiments, I recommend using a python virtual environment to avoid having to install anything system-wide :)

A colleague of mine (Steve Coupland) helped me with my question. Do people agree that this is a very efficient way to identify 0 value pixels in a tif? 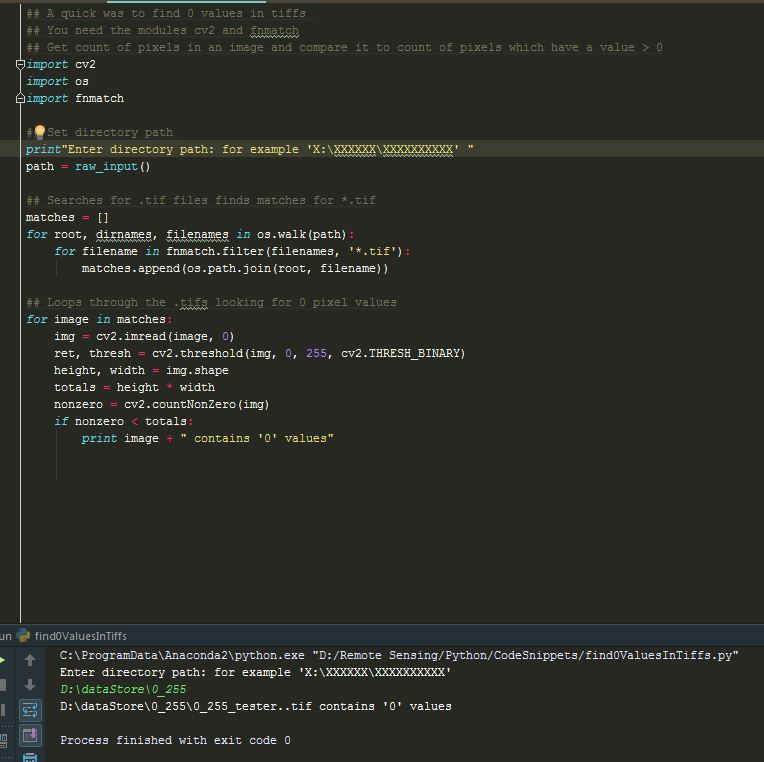 However I'd like to take this script further, would anyone be able to advise on how I could add all my results into a LIST and then print the LIST to a CSV ?

Not the answer you're looking for? Browse other questions tagged python raster geotiff-tiff nodata pixel or ask your own question.

5
Merge two rasters with no data value
3
Get indices from pixels with a certain value in PyQGIS
1
QGIS - Issue with No Data Value Pixel is changing only in header of ascii
1
Lost pixels during a raster merge with gdalbuildvrt
0
Filling no data value in raster using ArcGIS Desktop?
0
How to calculate mean pixels value of shapefile (for specific place)?
0
Changing a no value data from 0 to another value with python