Downsampling, projecting and aligning a raster to fit another one in R: aggregate(), resample() and/or projectRaster(), and in which order?

TL;DR: I have to downsample, project and align a raster to perfectly fit another one. Is it better to a) use aggregate followed by projectRaster or b) first use projectRaster for reprojection only followed by resample for aggregation and alignment?

Similar questions have been asked before, but as far as I can tell, none of them covers all three aspects of downsampling, projecting and aligning, nor do they consider all potentially reasonable options.

My target raster is in ETRS 89 LCC, at a coarser resolution and cropped to the German State of Bavaria (I know there's a Europe-only version of the HII, I've got my reasons to use the global file). I've put a reference grid filled with random values up for download here.

The task is now to perfectly align the hii raster with the reference (so that CRS, resolution and extent are identical) for use as an explanatory variable in a species distribution model.

The first step is obvious, I crop the hii raster to the extent of my study area, leaving some additional data at the edges:

After that, there are three things to do:

As far as I'm aware, there are three tools available for this in the raster package:

The question is now: which tools to use in which order, and why? There are several options available:

Option 1 is the quick and dirty way of just using projectRaster for the whole thing:

However, this is discouraged in the command's documentation "if the resolution of the output is much larger than that of the input" (which i guess is the case here).

Option 2 is what is being suggested by ?projectRaster: first use aggregate() to get close to the target resolution and then use projectRaster() for projection and alignment of cells:

Option 3 is quite the opposite – project first without any aggregation or resampling to retain as much information as possible for as long as possible, followed by resample:

Let's have a look at the results from the different methods: 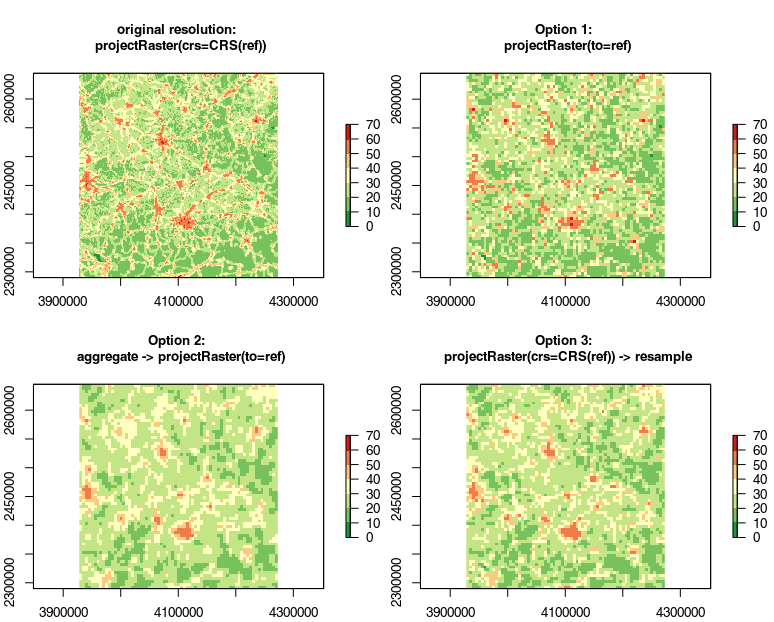 So Option 1 apparently is not really an option, but I wonder why Option 2 is suggested by the projectRaster() documentation and not Option 3. In digital photography, where warping/stretching a picture in order to perform "perspective correction" poses some similar problems, people tend to upsample (disaggregate) first, them transform and then downsample (aggregate) back to the original resolution or coarser in order to preserve as much detail as possible.

It was pointed out below that averaging and interpolating may not be the best choice for this kind of data, so I ran a second "B" set of tests using method='ngb' and fun='modal' instead. The results are interesting: 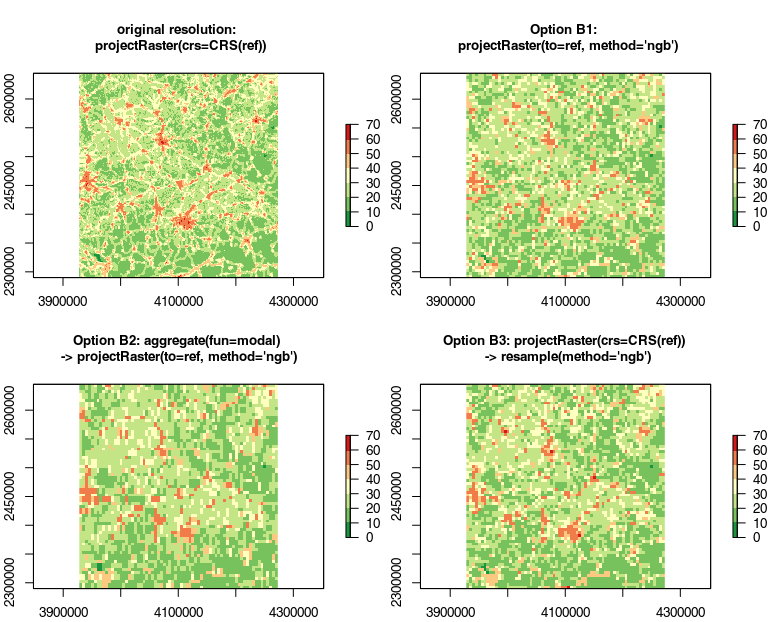 Meanwhile, I've been trying to find some more objective measures. First of all, plotting the frequencies of values as histograms reveals interesting patterns if the bins are small enough: 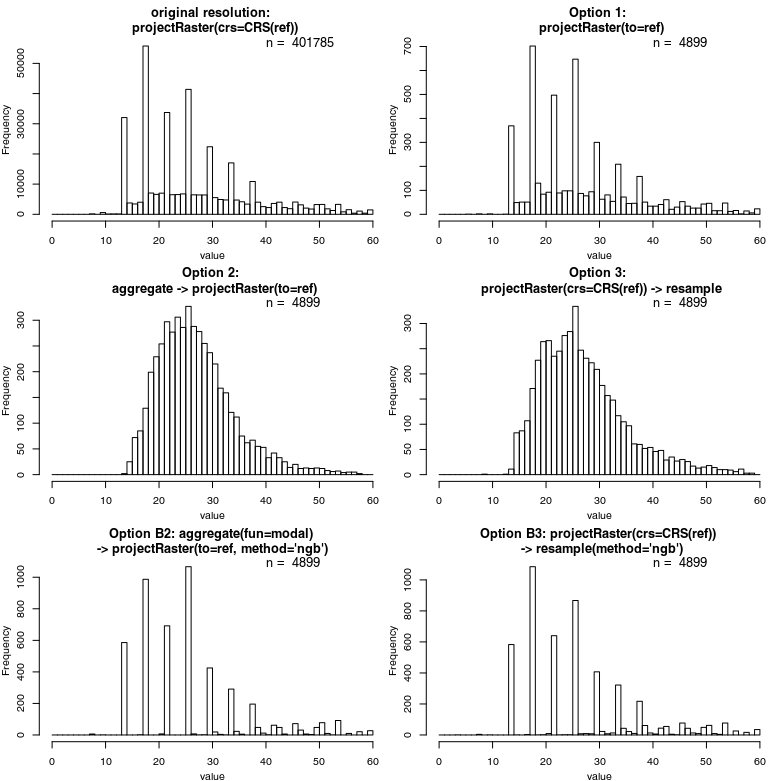 The "bad" Option 1 comes closest to to the original distribution – confirmed by a quick Kruskal-Wallace test. Then, I generated 1k randomly placed points, extracted values from all rasters, and ran a simple correlation analysis (repeated a couple of times with different points and basically the same results):

This one quite clearly suggests that my old favorite Option 3 may actually represent the original data best.

I am not sure that there is a single good answer here. It will be dependent on the data at hand. I will say that if you want to access the results, then put your evaluation criteria into a quantitative framework and do not rely solely on visual interpretation.

One recommendation would be to generate a random sample across the extent, run different projection/aggregation schemes and then assign the raster values to the random samples. You could then use something like a correlation or Kolmogorov-Smirnov to test distributional equivalency of each resampling scheme against the original raster. This will provide information on how altered the underlying distribution has become under a given aggregation schema.

Plot probability density function for each sampled raster, the line on the plot represents the mean of the original raster.

3
ArcGIS resampling rasters by maximum pixel value?
5
R: aggregate raster with 'mode' function - how does it work?
6
NA values in my raster after changing the resolution, extent, and origin
3
Re-projecting a Raster in R to matching resolution, crs, and origin, but different extent
0
R - not the same number of raster cells after reprojection
0
Cell/polygon equivalency issue
6
Aligning two rasters of same resolution perfectly on top of each other in QGIS
1
projectraster in R cannot complete transformation
0
Method to resample 2d numpy array to a coarser grid and weighted by pixel area in python (analogy to grass r.resmap.stats -w)