I have a line layer (MultiLineString) and 4 point layers (MultiPoint).

My line layer has 2 attribute fields, start_pt and end_pt, I need them populated with an identifier attribute (string data populated with values like A01, B01, B02, C01, etc. so it's not the regular $id value) from any of the potential 4 point features that can be snapped to the line feature.

Here's what the populated attribute fields should be like: (filled manually)

I'm looking for a mean to do this through either field calculator expressions OR PyQGIS as I need it as part of a plugin to automate it. So I can't use DB/SQL or anything else, basically.

What I have used so far was a calculator expression (tried changing start_point/end_point and array_first and array_last):

Which I would then assign to a variable with QgsExpression() and populate my tables with context.SetFeature(feature)

Back when I was limited to 2 point layers it used to work with relative success but as of right now it doesn't do the trick mainly because within() in and of itself is limited to 2 values for either True or False so it doesn't work for more than 2 layers.

I'm still a beginner with Python and PyQGIS so I'm not sure how to make it work with it either. I know I could use a spatial index as a mean to detect closes features from a given point layer that are close to my line feature's start_point or end_point (as it is shown at pyqgis: add attributes of points to attributtable of lines) but as I understand, only one spatial index is used at a time, so I'm not sure about that either.

How can I, for instance, retrieve the "id" attribute from the retrieved nearestNeighbor from a spatial index?

In the thread linked about, there's this bit of code which theoretically explains how to retrieve the attribute id of the given feature. But it obviously only works with a single layer in mind.

Is there a way to use multiple spatial indices to somehow achieve my goal?

I'm updating this question as the solution provided in the edit by @pigreco doesn't really solve the problem. Using his help I got on the right track. This is more of an elabored comment than an answer as I do need to provide screenshots and code.

Here's an example following his method: 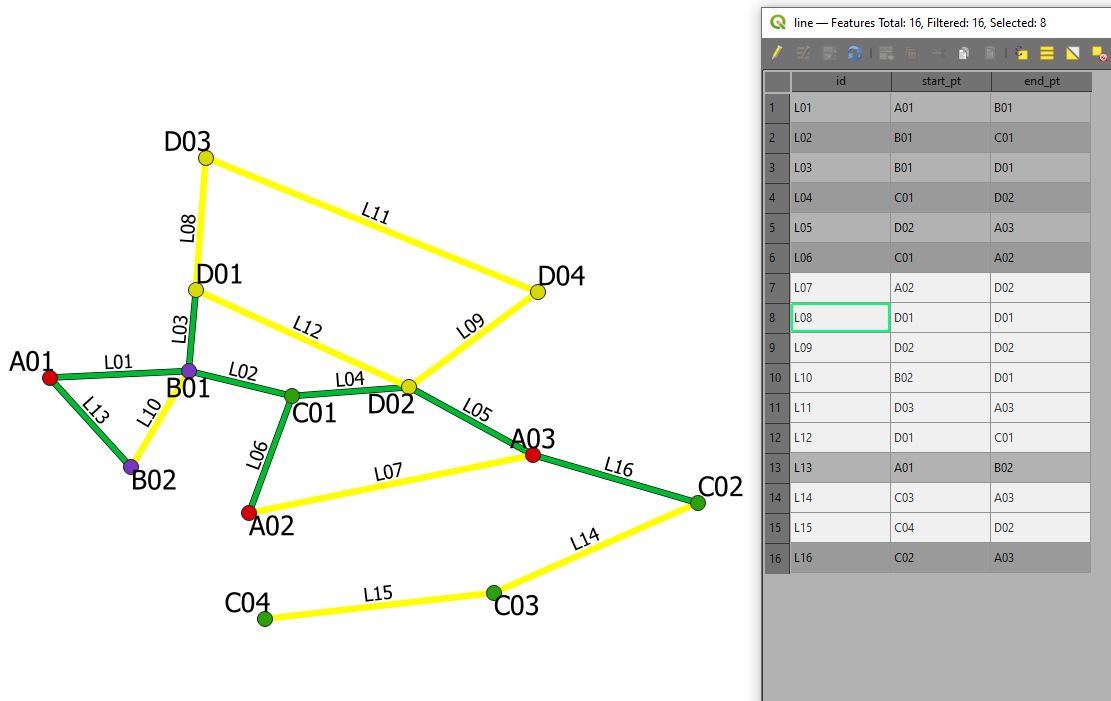 Overlay_nearest returns wrong values whenever two points are from the same layer. I have tried setting the limit to 1 and max_distance to 0 but the results remain sensibly the same. Replacing the first overlay_nearest by overlay_intersects (which ensures only the interescting geometry gets returned) does limit the amount of values (thus getting rid of cases like A03 replacing D04) instead I get NULL values instead of wrong values.

Here's the code I used:

Here are the results I get: 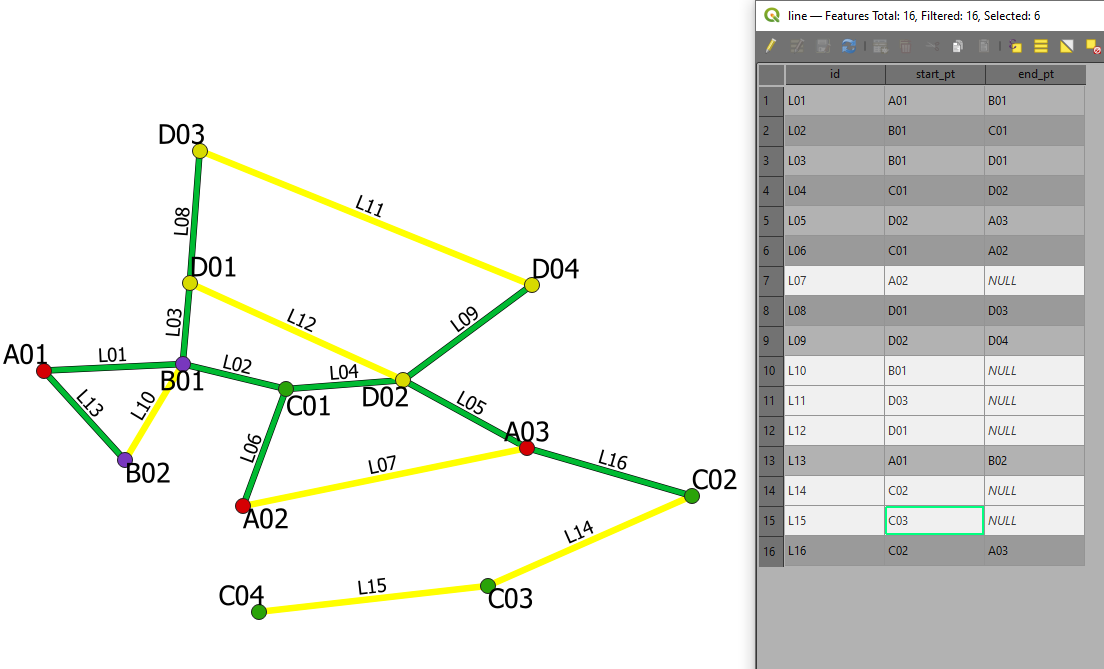 I have also tried with an aggregate expression:

Which gives me these results: 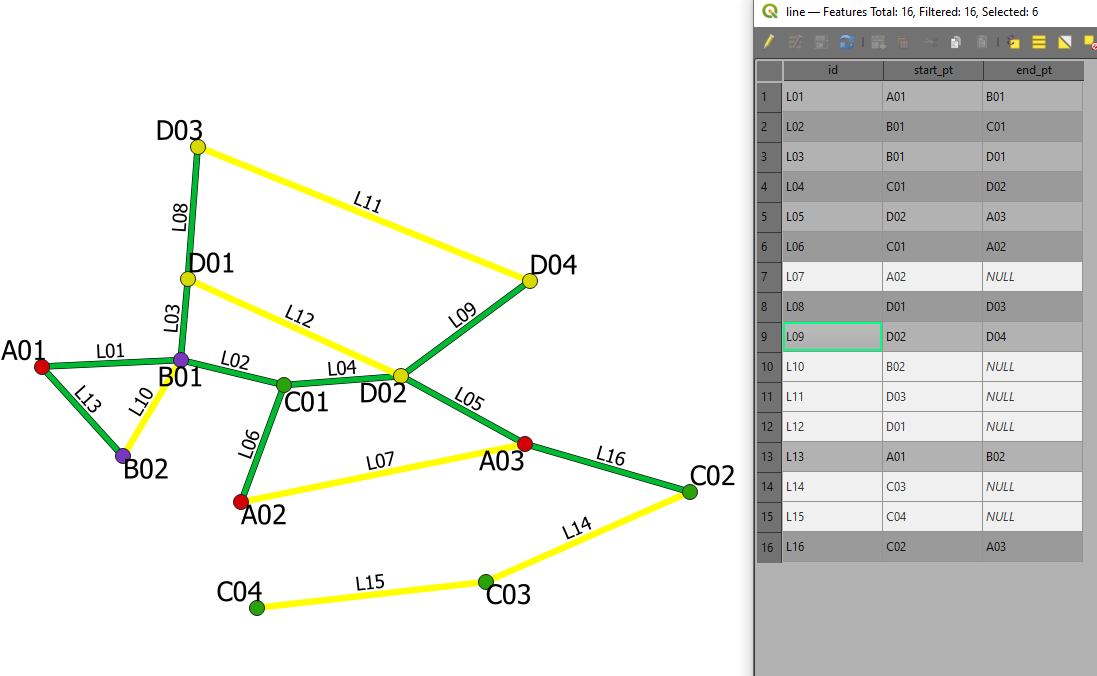 Although and to be quite honest, I'm fairly confused at what is returned by the array_forreach(array_get()) and the relation with my intersects filter which takes the current feature's geometry. 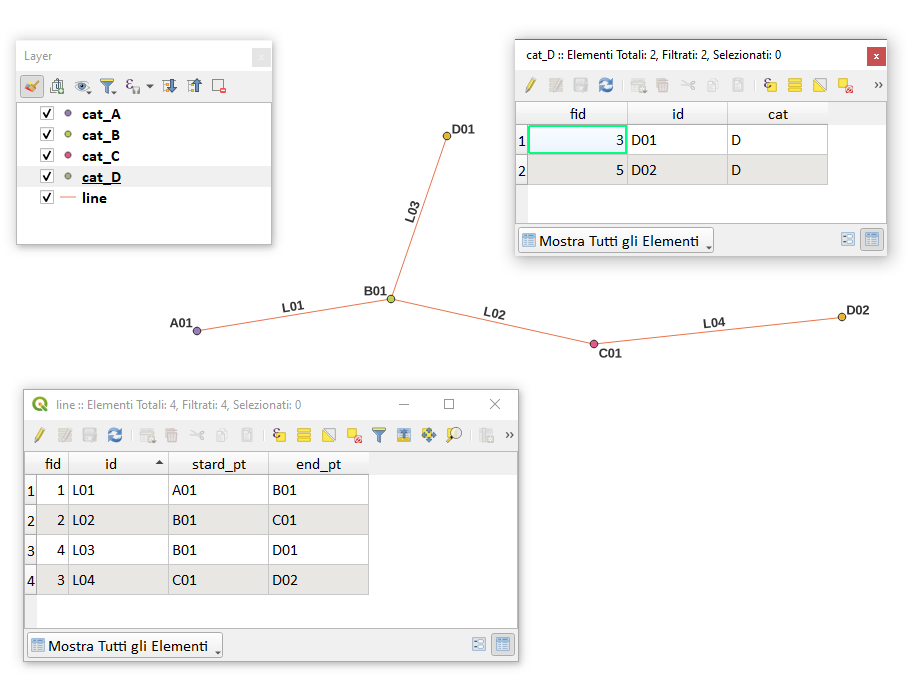 The previous expressions work for the case described, but if a linear element had points belonging to the same vector point, the expressions would no longer work, as it would not distinguish the start_point from the end_point;

I add the expression that solves the problem:

In Python you could:

You have to implement functions to grasp these situations, that is a significant amount of code, maybe 200 lines, without considering the necessary tests. This will be a good problem to practice code.

Not the answer you're looking for? Browse other questions tagged pyqgis field-calculator or ask your own question.

4
Fill attribute-table on feature-creation based on intersection with other layer
2
pyqgis: add attributes of points to attributtable of lines