I'm using QGIS 3.18 heatmap tool to visualise the space use patterns of chimpanzees for my master's dissertation. I import each chimpanzees coordinates as a csv file and then change the layer's symbology from single symbol to heatmap. This is how I produce my heatmap. I have then been adjusting the position of the gradient stop on the colour ramp to 4.9% and 5.0%, so that I get a heatmap that has a solid outline at what I thought was 95% point density, which I can later trace using toggle editing to create a polygon.

However, I don't really understand what this 5.0% mark represents. I thought it was something to do with point density but now I'm not so sure and I can't find any answers anywhere online. I have now done all my subsequent data analysis, and need to understand what the gradient stop values represent, so that I can set out my data processing methods clearly in my methods section.

What, in fact, is a heatmap all about?

Using a tool like Heatmap without understanding how it works and what it means is dangerous as you visualize something without knowing what it means. Then better abstain from using Heatmaps at all or first try to get an understanding of the fundamental concepts of a heatmap. See the following explanations and the screenshots below to understand what exactly a heatmap is and how it is constructed.

Basically, a heatmap it is kind of an interpolation that assignes different colors to each point on the map canvas depending on local point density (how many points are within a certain distance from each spot on the canvas), distance to next point, and - optionally - additional weight criteria.

Parameters that influence the appearance (color distribution) of a heatmap

There are different settings that all influence how the heatmaps looks like: which areas get assigned which color:

See in what follows how these settings influence the heatmap.

Imitate heatmaps to understand the principle

To get an understanding of what a Heatmap does, we can imitate the basic principles (see screenshot below):

This is basically the principle of the heatmap: you set a radius around a point layer and depending an how many overlaps you have in a particular area, the color changes (we imitated that using Blending Mode). Normally, you have a color ramp: it starts at color A (0%), reaches color B at x% and so on... and ends at color N (100%).

Meaning of the gradient stops' relative positions on colour ramp

Creating buffers around a point layer (blue), styling them with blending mode to imitate the principle of heatmaps: 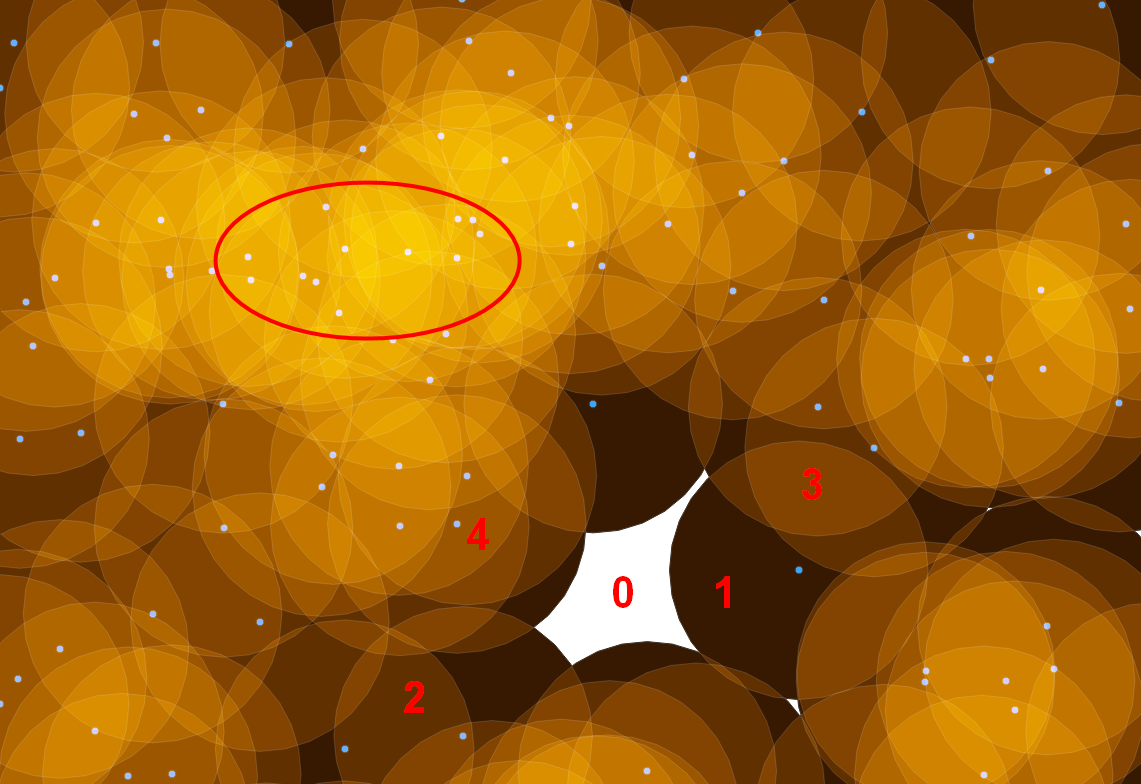 Diferent visualizations of the same data with changing settings

Remark: All the following five screenshots show the same extent and same point data as above, but with differnt settings for the heatmap. This shows how dramatically the visualization changes, using the very same data. So you should get an idea of what you do to be able to visualize the data in a correct way.

Same points and extent rendered with heatmap and the same radius as the last screenshot, using Viridis color ramp. As you see, the more overlaps you have, to more the color shifts to the right of the color ramp. The leftmost value (0%) is set to transparent (red ellipse) - this gives the white space. Where only one point is present (red arrrow), you see that differing from our imitation, even inside just one "buffer", the color changes from the center to the margins - so not just the number of overlaps, but also the distance from the point counts for the color. This makes smooth colors possible - above, we have sharp borders at the outer boundary of the buffers: 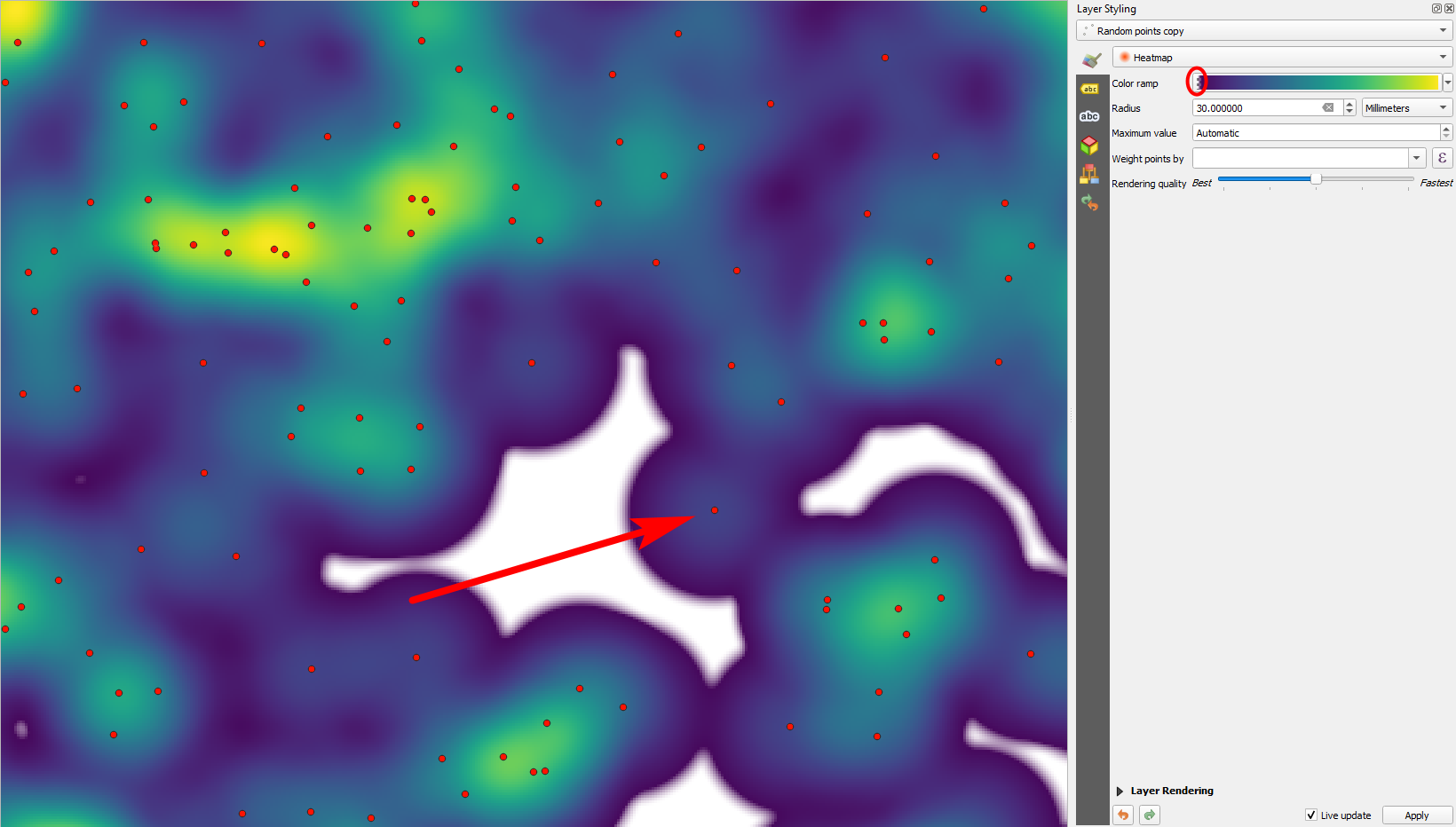 Weight points by: Adding an attribute field. Apart from points density (buffer oerlap) and distance from the points, now also an attribute values (here: importance) contributes to the rendering of the heatmpap. Points in zone 1 (labeled in red) have higher importance values then points in zone 2 - thus zone 1 is yellow (100%), zone 2 is just green (like ca. 80/90%), whereas above, no. 2 was yellow because points there are denser and we did not wieght points: 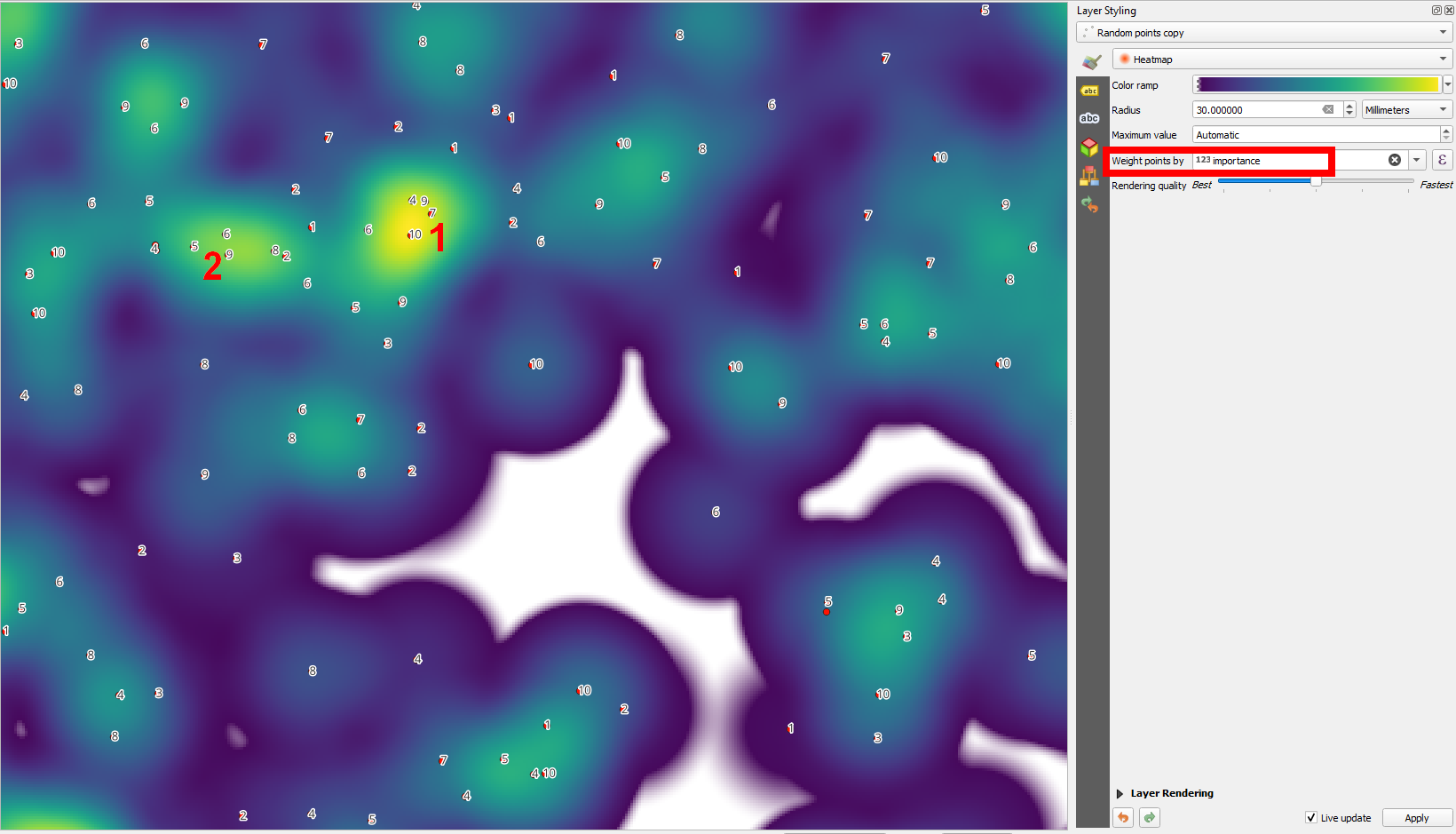 Adding another criteria to the distribution of colors of the heatmap: set a Maximum value. The maximum value in this heatmap is at ca. 35: that means: the highest value is 35, all others are lower. If Maximum value is set to 35, you get the image from above, with just one single area (where the maximum is reached) is yellow. When you now reduce the Maximum value to 20, the range of 0%-100% is reduced from min.=0/max=35 to min=0/max=20. Now, all values of 20 and higher are considered to be 100% and are rendered in yellow: 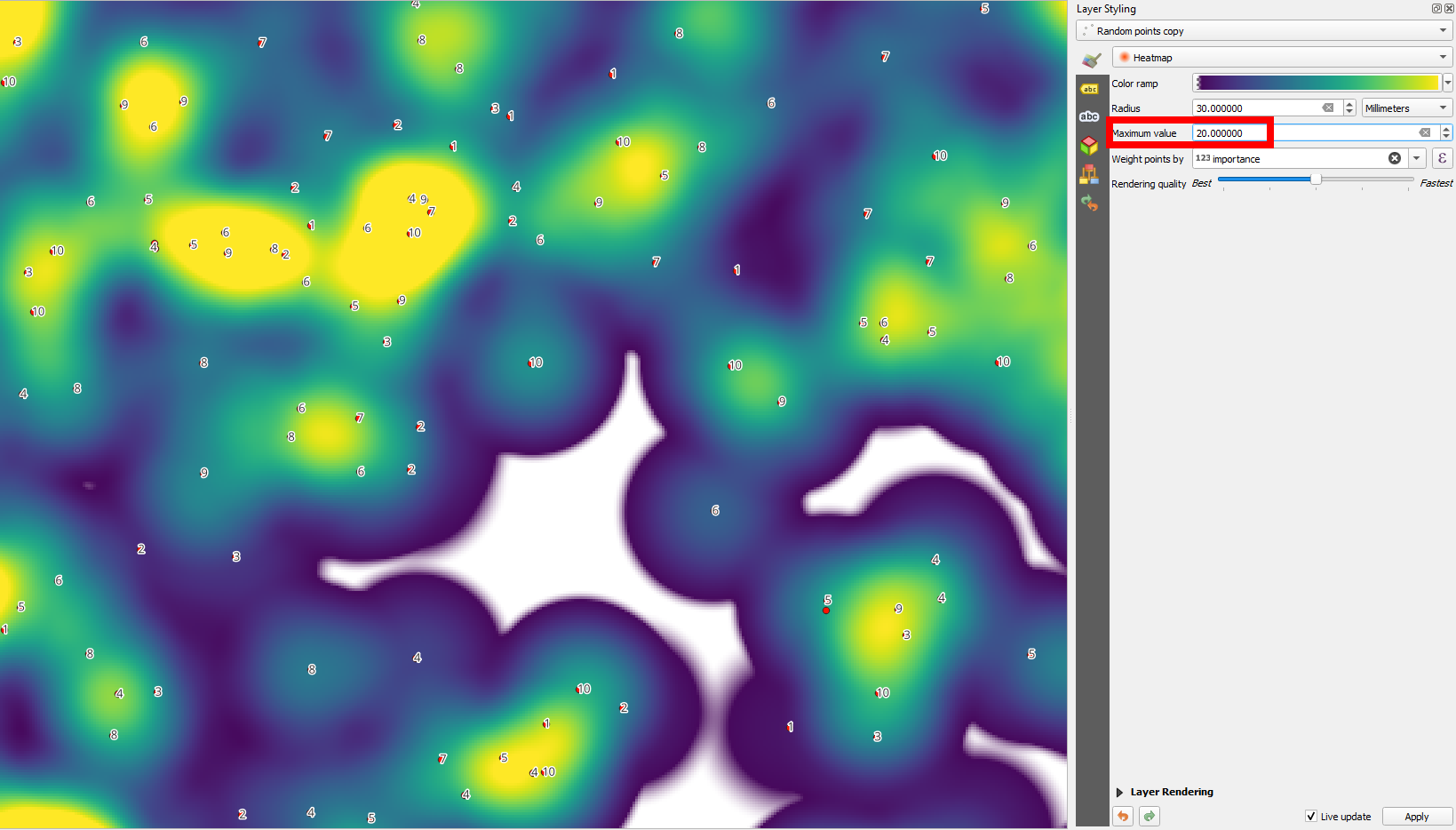 Playing around with radius and Max. value, the heatmap changes dramatically. Increasing radius (larger "reach" or coverage of the points, larger buffer radius) means that local extreme values are softened and not visible any more, the heatmap gets more blurred/diffuse with less abrupt changes over smaller distances, but interpolation over larger distances. Great to find overall patterns/extremes: 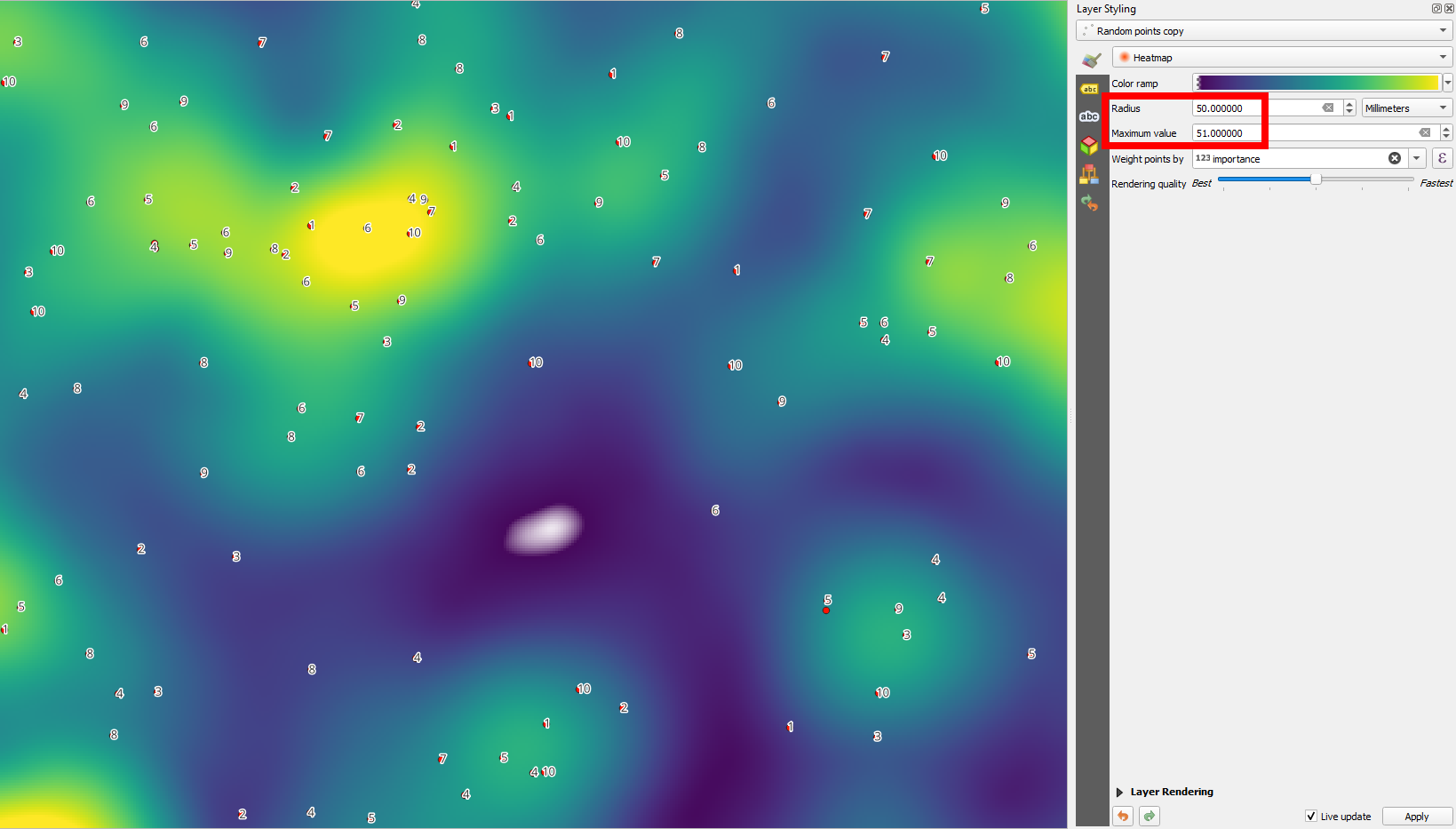 A small radius better shows local clustering of points - the "reach" of the points is less, you can discern more abrupt changes over smaller distances - great to find local extremes and patterns: 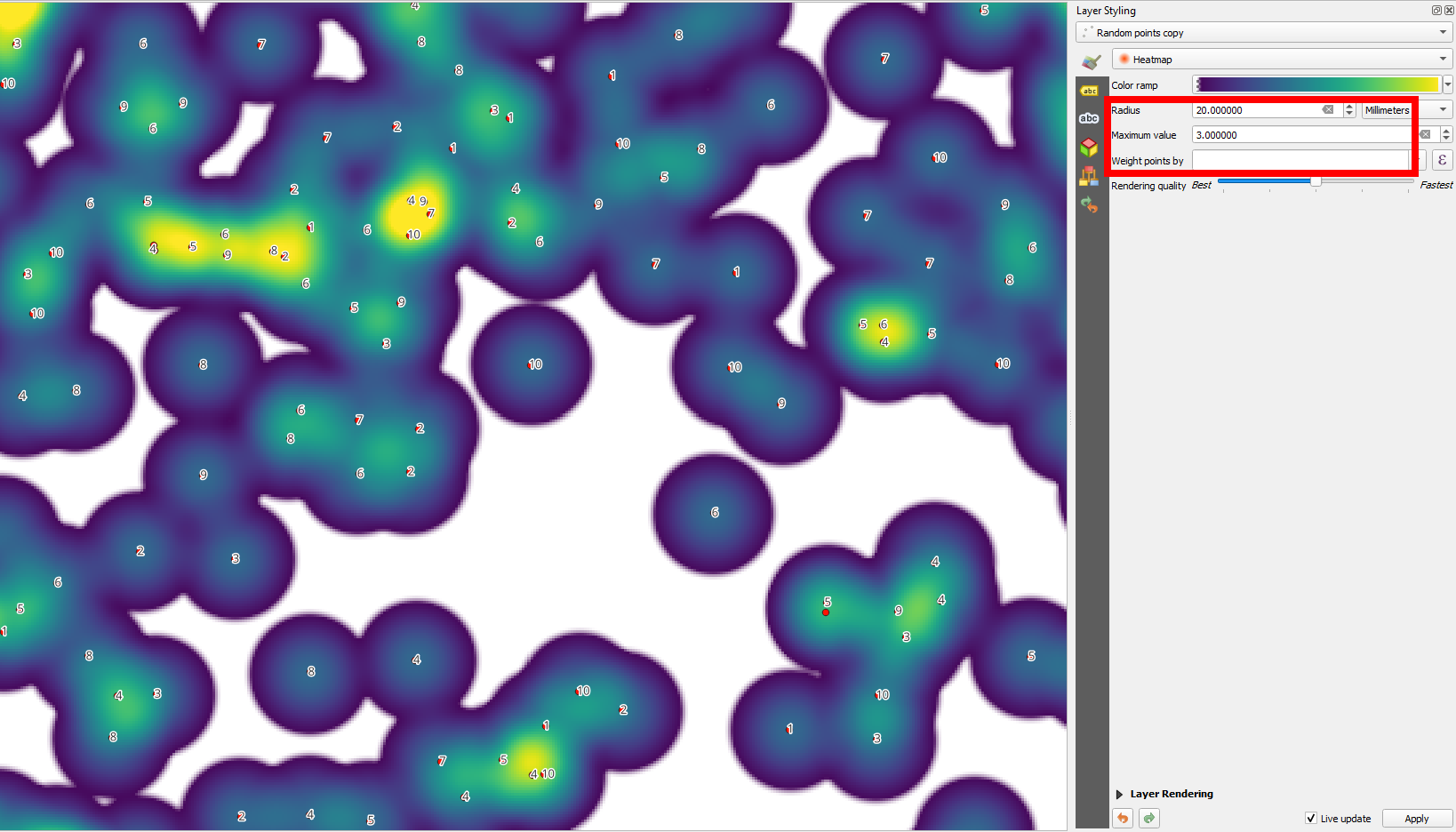 7
Use QGIS expressions to create geometries: difference between geometry generator and geometry by expression
1
QGIS Clustering: Can I create heatmaps grouped by an attribute?