Difference between Table of Contents (TOC) and Legend in ArcGIS Viewer for Flex?

I have been using the ArcGIS Viewer for Flex for quite a while. I couldn't help noticing there were still two widgets, one for Table of Contents (TOC) and the other for Legend.

What's the difference between TOC and legend in a web mapping app or anywhere?

Web apps certainly can do both. GeoPDF allows you to toggle layers.

Unless you want to print a map out, personally I don't see a reason that those two are separated.

For those who see significant differences, please take a look at the screenshots on my blog (The site doesn't allow me add an image because I am new?!). Or maybe try a custom widget on FlexViewer 2.2 for a clickable legend or a TOC with layer icons. And since search rules all nowadays, it allows you to search layers across services by keyword.

Then tell me if you still see they are two or one.

A Table of Contents [TOC] is an interactive list displaying features on the map - some even showing what is visible in real-time. 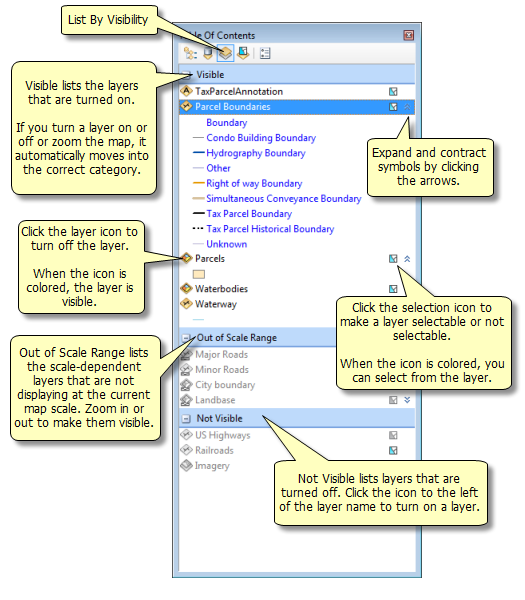 I think the general difference between a TOC and a Legend is that a TOC allows for control of the map. Depending on the application the TOC allows you to change the visibility and / or drawing order of map layers. A legend on the other hand does not allow for map control and is a representation of symbology used in the map.

In terms of a web mapping app there are instances where you would want to show the symbology scheme in a legend format without allowing manipulation of the map. Some applications do not allow users to control map layers, but take care of this internally based on scale or some other factor.

I have not used the Flex API much, but for the ESRI Javascript API there are examples of a TOC which also shows symbology. Also available are strict legends which show your symbology icons but do not allow manipulation of map data.

I think there is a significant functional difference between a Legend and a TOC.

Still, this doesn't mean you couldn't show symbology in the TOC (even though the Flex Viewer doesn't currently support that out-of-the-box). It's just that for certain things it isn't always needed. For example, when using a basemap from Bing, Google, or ArcGIS Online, most people can interpret which features are water and which features are roads and highways. Also, with imagery a legend isn't always useful.

Also, by having a Legend that focus only on the key layer(s) needed, the Legend can be a great way of explaining the purpose of your application - without cluttering it with layers that people don't need interpreting.

As for scale-dependency which a few people brought up here, I think that both a TOC and a Legend can benefit from visually indicating if features are in-range, either by greying them out or removing them or otherwise clearly marking them as out-of-range (like in Mapperz ArcMap example). The Legend widget in the Flex Viewer supports the first two options using a respectcurrentmapscale tag.

Not the answer you're looking for? Browse other questions tagged legend arcgis-flex-viewer table-of-contents or ask your own question.

4
Are there any well symbols for ArcGIS Silverlight/WPF?