How to transform a set of street-segments into city-blocks, with PostGIS2?

Theoretically is possible to obtain the polygons of city blocks (urban blocks) from streets, when streets are represented by street axis (LineStrings).

The urban blocks are bounded by streets, so the street segments can be used to form a polygon which contains only one block inside... See illustrations.

There are an (SQL) PostGIS 2.X script to do this? A plugin software?
PS: approximate city block geometries are enough.

Starting the process from a "mesh of connected line segments", it can be: 1) obtain associated polygons; 2) isolate polygons by negative buffer and buffer subtraction of the lines. 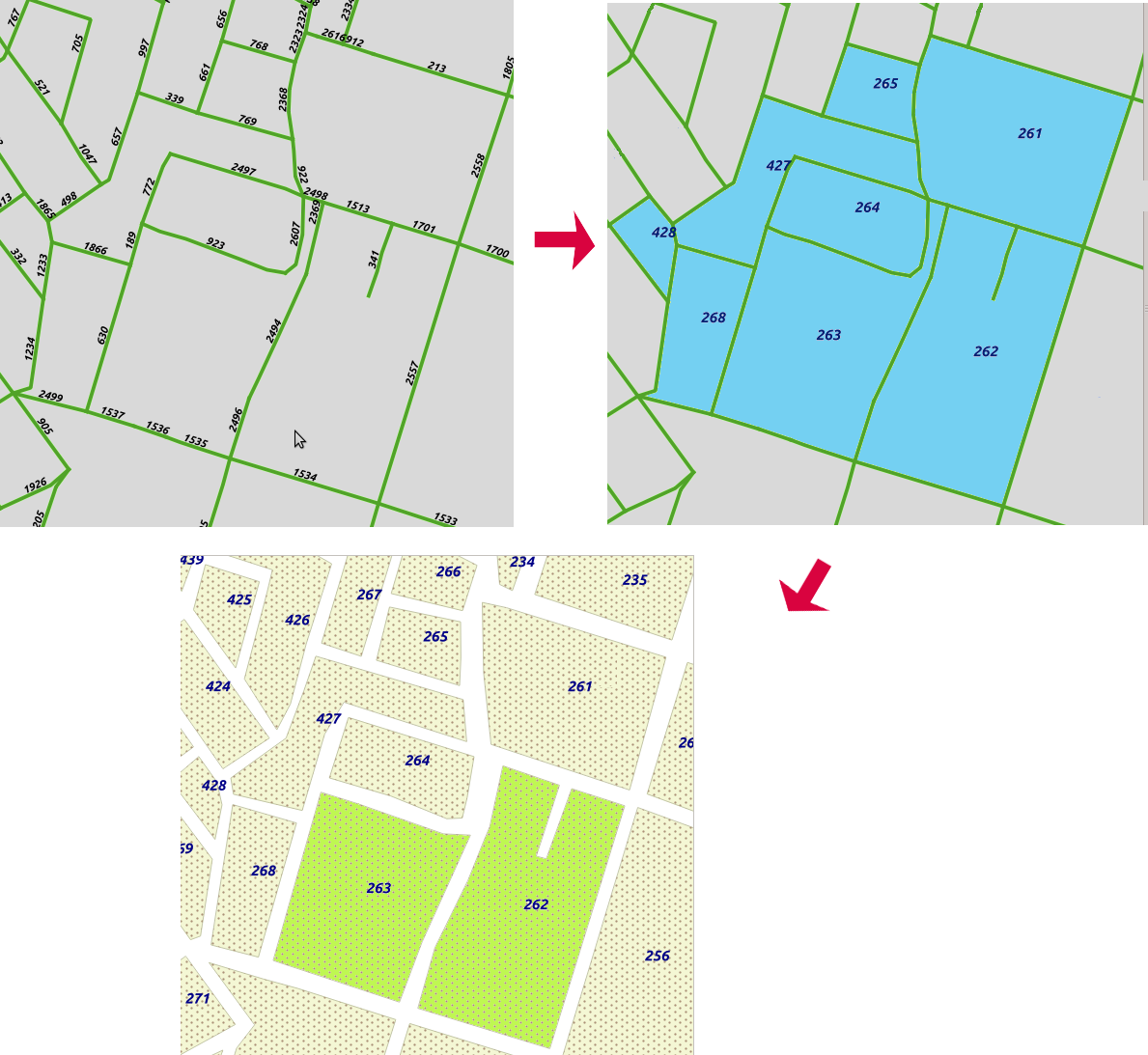 Example: the polygon 262 (representing a city block) was originated by the segments 2496, 2494, 2369, 1513, ... And the neighbor polygon 263 can use some common segments, but next (by negative st_buffer or another operation) will be really isolated polygons, so, low precision is enough.

I think we can translate this specific problem in a more generic one: the set of street segments can be viewed as a kind of tessellation, that is, the segments separe the plane into contiguous regions – the urban blocks are lying in the interior of these regions. Each segment is a side of two regions.

The main problem is to transform the "set of segments of the tessellation" into independent polygons.

The ST_Polygonize aggregate in PostGIS will return a geometry_dump containing all possible polygons formed by a set of lines. I'm assuming the block IDs shown in your example are not related to the IDs of input linework. If this is the case, you can get your polygons and IDs with:

The slow part here is the ST_Union. It seems like this should work without that call, as long as the input lines are properly noded, but I haven't been successful doing so.

A negative buffer won't give the exact results shown in your example, because the dead-end streets will be ignored by the polygonization process. But you can take a positive buffer of the original linework, and use ST_Difference to remove that area from the block polygons.

Not the answer you're looking for? Browse other questions tagged postgis convert linestring polygonize streets or ask your own question.

0
Low resolution raster conversions to vector yielding millions of single pixel polygons. Trying to merge all directly adjacent polygons
9
How to transform isolines to isopolygons with postgis?
1
Geocoding Street Segments Based on Extents in ArcGIS for Desktop?
10
Compute parallel lines along a center line in PostGIS
10
Identifying “long and narrow” polygons in with PostGIS
4
Obtaining the geospatial complement of a set of polygons to a bounding box in PostGIS
6
Snap points to the nearest location on a polygon