FME - How to add an attribute when schema definition is dynamic?

I have an FME workspace which reads a folder of MapInfo TAB files and writes them to a File Geodatabase. The reader and writers are both using dynamic schema as I need to run this workbench on multiple folders each containing several files.

I'm assuming that this isn't working because the schema definition is coming from the reader. But, why won't it work even when I expose the fme_dataset attribute?

I've looked at this similar post on FMEPedia, but I don't see how I can use a schema mapper for this purpose.

I thought this might be relevant as well, so I'll add the following:

I have created a separate attribute called FeatureClassName which is just the source file name which has been validated (removes non-word characters such as brackets). In the dynamic properties for the destination geodatabase, I have used a custom schema definition: 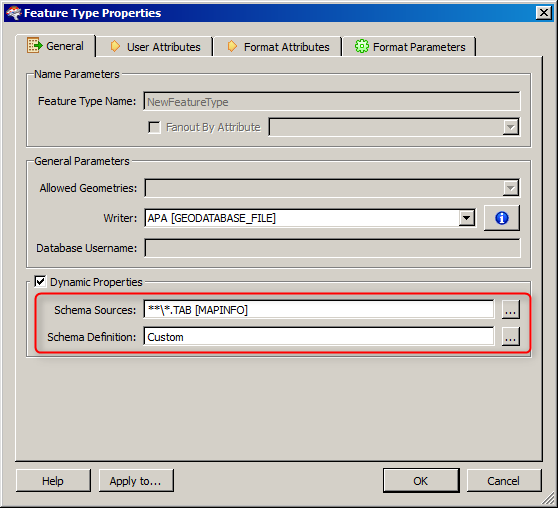 I am setting the Feature Type Name from that attribute: 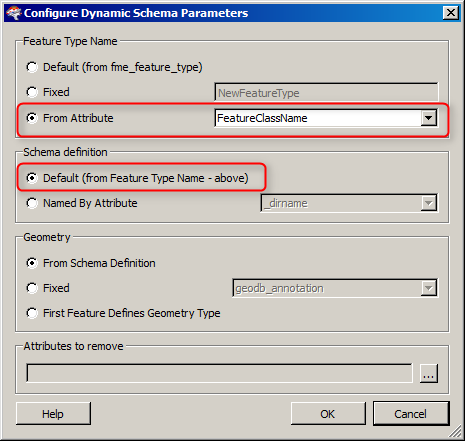 The Schema definition is set to default (from Feature Type Name - above). Is it possible that this could be the reason I'm not able to add the attribute?

I'm going to disagree with Ken here (sorry Ken) and say this should work as you describe. If you add a new attribute to a dynamic schema it should get added to the output.

In fact, I've tried it myself and it seems to work, so I don't know why it isn't happening for you. I've posted my example to Dropbox for you to check out. It uses 2014 but the same technique should be good in earlier versions. The only difference to your scenario is that I'm using a fixed (not dynamic) reader.

When you say it doesn't work, is the attribute not added at all, or is it added but with an empty/missing value? I think that's an important distinction to help diagnose the problem. If the latter then check your schema field is large enough (it might be dropped rather than truncated) but I'm dubious that would be the cause.

If that fails to help I suggest talking to our support team.

This is tricky but possible in later builds of FME 2013 and FME 2014. You can get the schema in a different way, by adding a SchemaReader to your workspace which has its source parameter linked to read the same source as your MapInfo reader. The schema reader gets the schema from the files you are reading and then we can provide the schema as a list attribute to the dynamic writer. The trick is that you can add your additional File_Path attribute to the list. The list must be called 'attribute' and contains the attribute names and data types that the dynamic writer can use. The list is added to each attribute going to the writer. The list might look something like this:

The other catch is that you need a null reader as a Workspace resource and this "null" reader is set as the schema source for the Dynamic Writer in the destination feature type properties.

I have placed a workspace here that seems to work - probably easier than trying to follow my long winded explanation: https://www.dropbox.com/s/6c815551p3h6joc/AttributeDrivenDynamic.zip

Edit January 6th 2014 (later same the day) There was an issue in the workspace download which I just fixed. For the source MapInfo feature type you need to have "Merge Feature Type" checked and filter set to * so that MapInfo files with any name can pass through.

You may use the FileNamePartExtractor transformer. You can assign the Directory Path filename part to the fme_dataset. This transformer output may then be pulled into your writer as input. 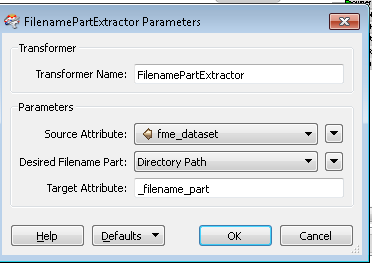 Not the answer you're looking for? Browse other questions tagged fme fields-attributes dynamic or ask your own question.

3
FME: Can I add multiple feature types to the SQL Server Spatial reader?
3
FME - MapInfo to File Geodatabase Conversion Project
6
How to write all attributes when multiple source files have the same name?
1
How to load multiple types (formats) of dynamic readers into one FME workspace?
1
FME: How to retain Field names in reader?
3
FME Dynamic schema error - Features With No Schema defined
1
How to connect FME user attributes from reader to writer when there are transformers in between
2
How to create new attributes in a feature from the value of another attribute