I've been trying to accurately import and process some .hdf files from the MODIS Atmospheric Profile product (MOD07_L2) in R for several days now. Still, there's something going wrong during data import. The below code can be reproduced using one exemplary .hdf file (MOD07_L2.A2013001.0835.006.2013001192145.hdf) that can be downloaded from Dropbox.

So far, so good, but here comes the confusing part:

Considering the fact that Skin_Temperature has an official valid range from 150 to 350 K (see MOD07_L2:Format & Content), the mean would inherit a value of

after considering the corresponding add_offset (-15000) and scale_factor (0.01). Note that we're still talking about Kelvin, not °C. Extracting SDS No. 8, i.e. Skin_Temperature, using

and opening the resulting file called "tmp.tif" in QGIS resulted in seemingly reliable values centered around 15000, i.e. roughly 27 °C. However, importing "tmp.tif" back into R using raster again resulted in values comparable to the ones shown above:

I've been searching the internet and stumbled across similar problems related to rgdal. However, when I tried to cast toUnSigned on band 1 of my previously generated 'SpatialGridDataFrame', I received the following error message:

Apparently, the data imported into R is not even of type integer (what it is supposed to be), but numeric:

Is there an apparent mistake in my code, or is there any point I miss when importing the .hdf and .tif files using rgdal? I would be extremely grateful for any kind of help.

The answer is surprisingly simple.

solves the issue. The only thing left to do then is transform the resulting SpatialGridDataFrame to a proper Raster* object using raster(). For this purpose, it is necessary to retrieve the west, east, south, and north bounding coordinates (see ?extent: xmin, xmax, ymin, ymax) from the metadata e.g. via

The thus determined extent (together with the EPSG code) can then be passed on to the finally created RasterLayer which, after applying the scale factor and offset, definitely looks fine now. 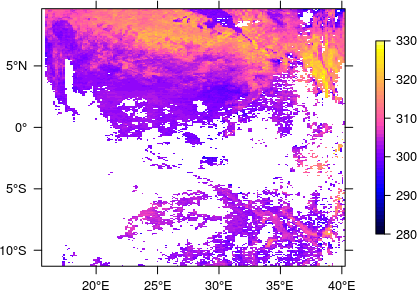 I have not managed to do it in R either.. and I have also spent countless hours. What I do now is this:

the code to run MRT:

Then you have to set the "what" argument of readBin to int, numeric, etc... I always have the same extent of my files (defined in the "prm"-file) I get the extent and resolution directly from there:

Not the answer you're looking for? Browse other questions tagged raster r modis rgdal or ask your own question.

4
Recommendation for getting TIF raster from modis HDF, for processing in R