The code gives a score to pipes (from pipe layer) that cross, or passes next to roads (from road layer) depending on the width of the road. this was the code-block that assigned a score of 5 if the pipe crosses.

What you are looking at is an Advanced Field Calculation. 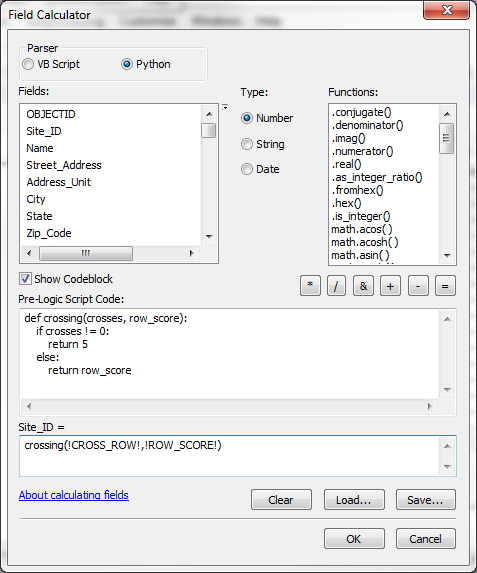 So crossing() as defined in the Pre-Logic Script Code window is a function, which takes two parameters, crosses and row_score.

In the second window, the parameters (crosses and row_score) are being passed to the crossing() function by means of the values in the fields "CROSS_ROW" and "ROW_SCORE", respectively, for each record in the attribute table.

EDIT: To more properly answer your question: encapsulating something in exclamation marks means value from the field named whatever is encapsulated. So the value of the field named !CROSSES! for this record. The reason everything is in quotes is because whoever wrote this was probably doing this through ESRI's ArcPy Site Package which would require this expressions and code blocks be passed in as a string.

1
Using ArcGIS field calculator with if else to populate field?