Finding the distance between points along a river (Linear referencing)

I am new to gis and am struck. I have a network of rivers which is made up of small linestrings (polylines). In a different shapefile, i have locations of several stations on a river. I need to find distance along the river from each station till the end of river.

The problem is that I don't have one complete linestring of river. And there is no common attribute I can use to union or merge the linestrings. Also, some stations are on tributaries. 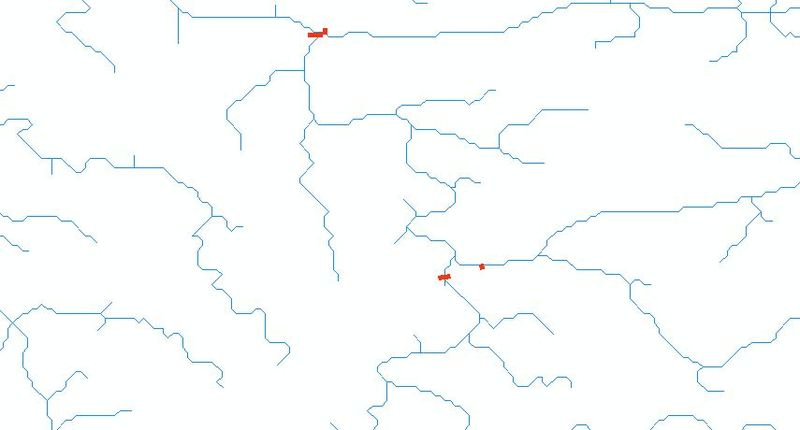 So the bottom line is I need to make a large network of rivers including tributaries and perform liner referencing. But I don't know how to do this. Any help is deeply appreciated. Please explain as clearly as possible.

I would agree with BWill. Your main problem is to define the origin of each polyline. What constitutes a 'river'? Ι would make the assumption that a tributary is an standalone "route" starting from 0-> length of the tributary. Then I would the same for the main rivers, but in this case I would create a merged polyline from all the constituent polylines. I think once you have that you are 'almost' there. Then: Convert all your merged polylines to Measured polylines (PolylineM) -including the tributaries. You then have your 'route network'. From then on its a matter of finding the distance along your route for each station. I guess the station locations are defined in XYs? Also- another guess- they dont fall exactly on top of the river, do they? In any case you will need a way of finding the distance of the station from the beginning of each river or triburary. In theory, if a station is on the intersection of the river and the tributary it may have 2 locations (one for each).

To find this location you can use ArcMap tools but haven't use them for a while so cant remember of the top of my head. On the other hand if you import your shapefiles (?) into PostGIS you could use the ST_Line_Locate_Point. This function:

Returns a float between 0 and 1 representing the location of the closest point on LineString to the given Point, as a fraction of total 2d line length.

Which means you can then find the location along the river multiplying what you find with the (merged) river length. A final note- If you use PostGIS you dont have to go through the step of creating the PolylineM- only ArcGIS requires this for linear referencing.

From my question of the same nature,

How to create a point along a line given distance

I don't not complete my task through lack of effort. I believe the tedium you will experience is nominating the origin of each polyline.

Not the answer you're looking for? Browse other questions tagged linear-referencing or ask your own question.

7
How to create a point along a line given distance