Creating Heatmap from attribute value of point features in ArcGIS for Desktop?

I've run through tutorial from ArcGIS on how to create a heat map using Spatial Analysis.

Based on the example, point features are scattered around the map and we need do the following to generate heat map.

For example: I have 5 locations.

In the first scenario, I will have

While for second scenario, I will have

I managed to achieve the heat map I'm looking for using Kernel Density (Spatial Analysis) and use the respective attribute as a value for "Population Field". 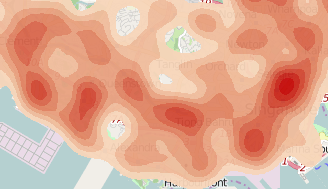 Not the answer you're looking for? Browse other questions tagged arcgis-desktop arcgis-10.2 spatial-analyst heat-map or ask your own question.