I've been tasked with finding a complete dataset of Scotland's electricity grid network. This comprises a series of cables carrying 132 to 400 kV. I'm assuming that many of these cables are above ground. The National Grid publish an open dataset of both cables and pylons for England and Wales. However the grid in Scotland is managed by Scottish and Southern Energy and Scottish Power, and neither publishes GIS data.

I've noticed that cables and pylons are shown on OpenStreetMap, but only draw when you zoom in beyond 1:10,000 or so. I don't understand the complexities of OSM enough to make the most of the tagging system, so I could well be missing something fundamentally important here. I downloaded the 'Scotland latest' dataset from Geofabrik but this seems to be generalised, and doesn't include the cables I need.

I have had moderate success in QGIS importing lines for a trial area using the Vector -> OpenStreetMap -> Download Data route. However I cannot download national coverage this way.

I've also installed Java OpenStreetMap Editor, on the back of information online that suggests you can use this to download data. Unfortunately I've not found a way to query data for download using tags and you cannot download national-scale datasets.

Rather than take a 'dump' of all OSM layers, I would quite like to be able to state the layers I require and, say, a bounding box for which I wish the data within.

Ultimately the grid would be used in ESRI ArcMap in a map for publication.

Of course you can further modify it by adapting voltage=* for example.

There are lots of ways..

I think the easiest is probably the QuickOSM plugin for QGIS. This is a GUI wrapper around overpass turbo mentioned already. I personally find it's faster on my old laptop than using the overpass turbo website directly, but your mileage may vary. You can get back shapefiles or geojson using this plugin; the web site has more export options.

Just use the power as the key and leave the value option empty, and edit the timeout if the default 25 seconds is too low. (Tip: make sure you include Relations or you won't get much data back).

This is really just an alternate way of implementing karpfen's answer :- 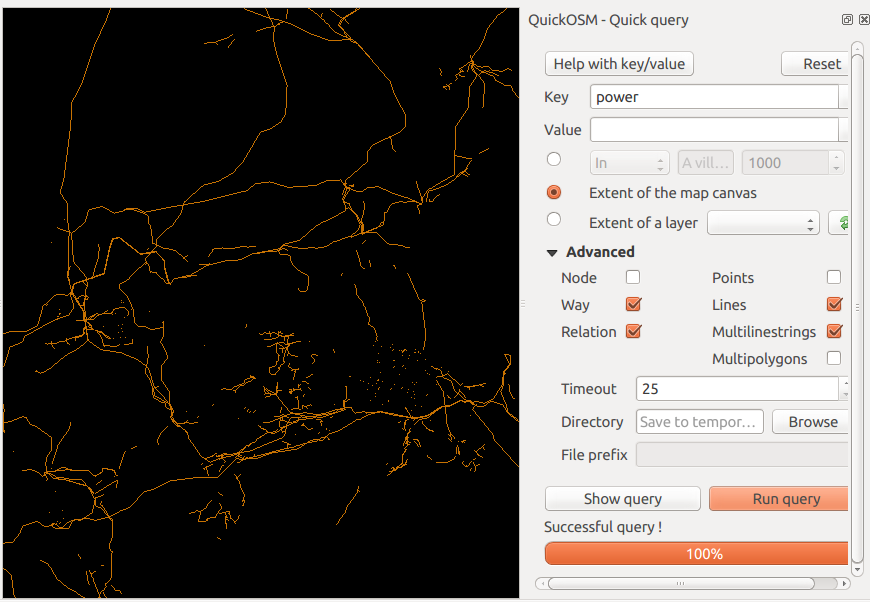 If postgresql is an option for you, bringing the GeoFabrik pbf downloads into postgres with osm2pgsql is another way. As a bonus you effectively have all of OSM for Scotland, so if you need to start adding roads or place names (even if only to get some context) you have them to hand. I'm not sure how easy it is to get osm2pgsql working on Windows, though.

Alternatively to osmfilter, you can use osmosis to extract the data from Geofabrik extracts in one step:

You will get the fences around power substations and stations as well. To import the data into QGIS, you can use Add Vector layer, or Vector -> OpenStreetMap -> Import Topolgy from XML, then Export Topology to Spatialite.

Another way is to download the osm.pbf instead of the shape files from Geofabrik.

Then load the lines via the QGIS dialogue vector --> OpenStreetMap--> import topology from xml etc.

Hope that works for you!

Not the answer you're looking for? Browse other questions tagged qgis openstreetmap data or ask your own question.