How to move polygon pie charts symbols in ArcGIS?

I used pie charts in my map, but they don't appear in the desired position. Instead, they all appear in the exact middle of polygons.

The charts were created via symbology -> charts -> pie option

I need to put area names to the middle of the polygons and the pies above them, or adjust the positions of both of the text and pies. But I can't seem to figure out how to move the charts, not even with Editor.

I not sure there is an automated way of doing this. You can use the maplex engine to ensure your labels are centred but then they clash with the pie symbol.

A solution is to create your pies exactly as you want them at the scale of the map you want to draw at then right click on the data frame and choose Convert features to graphics. You then turn off the pie symbol so just make your polygons what ever they are and you are left with all the pies as graphics on your map. It is then up to you to move them.

Below is an example: 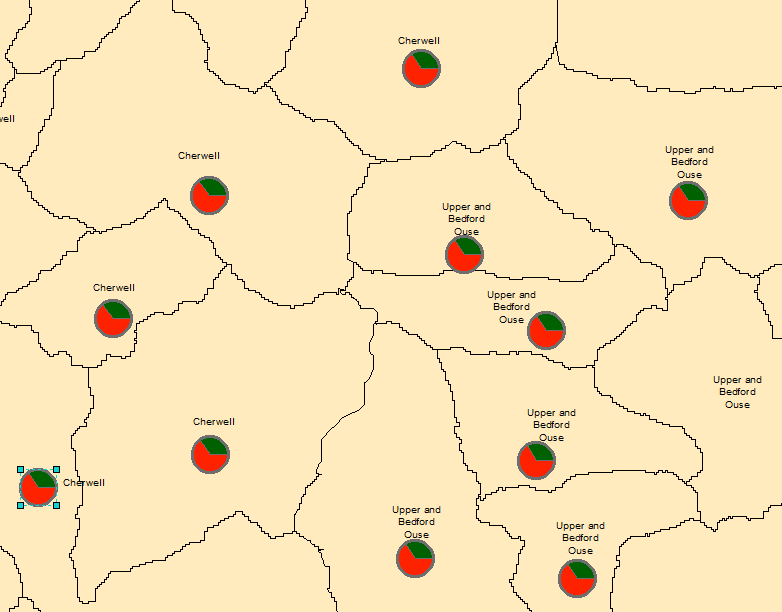 Be aware when you convert to graphic arcmap adds the original features to the exclusion list in the layer properties > Display > Feature Exclusion section. You just need to remove them to enable their display.

Not the answer you're looking for? Browse other questions tagged arcgis-desktop arcmap editing chart or ask your own question.

2
gridlines are on top of some text boxes but below others, how do I make it so that the text boxes are above the gridlines in all cases
1
Transparency in pie charts
1
Pattern Effect in Pie Charts in QGIS?
1
Showing top 5 through pie charts/graphs using ArcGIS for Desktop?
3
Drawing charts(pie or bar) on map Arcgis Api for javascript