I've been trying to clip a road layer into several layers by using region polygons. So in detail: I've got a layer with all roads of Germany and a second layer with all states and regions of Germany. And now I'm trying to divide this road layer by German states and regions and save them as shapefiles named after that region. Meaning: Loading this new shapefile only contains the roads of one region. It only works for one feature at a time, selecting the one region and going into the geoprocessing tools and clip the roads layer.

Is there any easy one-step-way to do it for all features? I could not find anything similar in the forum, as I don't know where and what to search for exactly.

If you need a more specific explanation, I'll do my best.

You can use Multi Clip plugin. It clips a layer by each polygon in another layer. 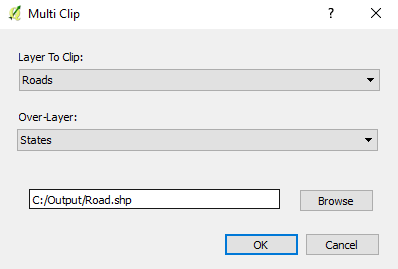 For sample process above, Roads layer is clipped by each States polygon and saved as Road1.shp, Road2.shp, ....

PS: The plugin is experimental, therefore you have to check Show also experimental plugins in Plugins > Manage and Install Plugins > Setting tab.

Not the answer you're looking for? Browse other questions tagged qgis clip fields-attributes features or ask your own question.

6
Clip polygons with other polygons based on matching attributes
2
Why does clipping a line layer using a polygon result in an empty shapefile?
3
Empty output generated when clipping features after converting KMZ to shp
3
Clipping points by a polygon attribute in QGIS
3
Why can't I clip my Shapefile?
1
Split lines layer into multiple parts using polygons
6
Split polygons into equal areas within each region
2
Clipping Lines Using Expression in QGIS?
1
Adding feature class name automatically from overlay layer into attribute of clipped layer while iterating clip